Australia: More than 200 Arrests in Melbourne During Protest Against Restrictions 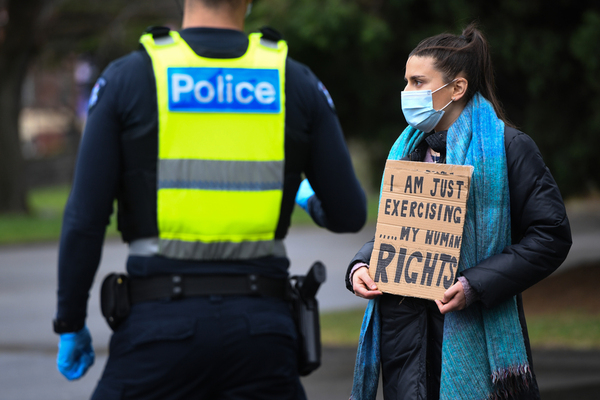 Hundreds of protesters were arrested and police were injured today in Melbourne, Australia, during violent clashes with protesters opposed to the covid-19 crackdown.

Law enforcement used pepper spray and made more than 200 arrests in the country's second most populous city, where hundreds of people violated their obligation to stay at home to protest.

Melbourne has imposed the sixth quarantine since the pandemic began, and the state of Victoria, where it is located, today recorded more than 500 cases of Covid-19.

The police made it known that six police officers are hospitalized, after turning objects against them and after they were traced during complexes with about 700 protesters.

"What we saw today is a group that came together, not to demand more freedom, but to come face to face and clash with the police," Victorian Police Chief Mark Galliot told reporters.

The police attempted to prevent access to the city center to protesters, blocking roads and by inhibiting public transport routes in order to avoid the possibility of repeating the scenes of violence, which had marked the previous mobilization in August, with the participation of thousands of people .

The protesters, however, made appointments elsewhere. Images that saw the light of day showed a crowd rushing and violating the police blockade, as clashes broke out along a tram line.

In Sydney, police forces were developed in a park to prevent a similar demonstration.

New South Wales police said they had arrested about XNUMX people in the city and at low-key rallies in the state.

Pavlos Geroulanos: Not in a person-centered party

A few hours after the submission of the necessary signatures for his candidacy for the leadership of the Movement for Change, Pavlos Geroulanos, former minister, leader ...
Read more
GREECE

POSPLA: The public markets will operate normally on Monday

"The public markets will operate normally on Monday, October 25, 2021, the day of the voting of the bill that reforms and modernizes the regulatory framework of organization and ...
Read more
984

More than 8.000 schools, ie 60% of all school units, have applied the law of evaluation, he said on Friday afternoon ...
Read more
SPORT CITY

The members of the renewed technical team of the Men's National Team made a move of enormous value but also symbolism. The coach Sotiris Manolopoulos and the ...
Read more
SPORT CITY

KAE Aris issued a statement emphasizing that it has "as its first concern the health of the team members". A case of coronavirus was detected in the basketball Aris with the ...
Read more
WORLD

A new poll in France shows the far-right candidate Eric Zemour beating Marin Le Pen for the second round of the presidential election against ...
Read more
PRESS RELEASES

For the urban planning services of the Municipality of Athens, which are now provided digitally, spoke to Athens 9.84 and to George Apostolidis, the Deputy Mayor of Municipal ...
Read more