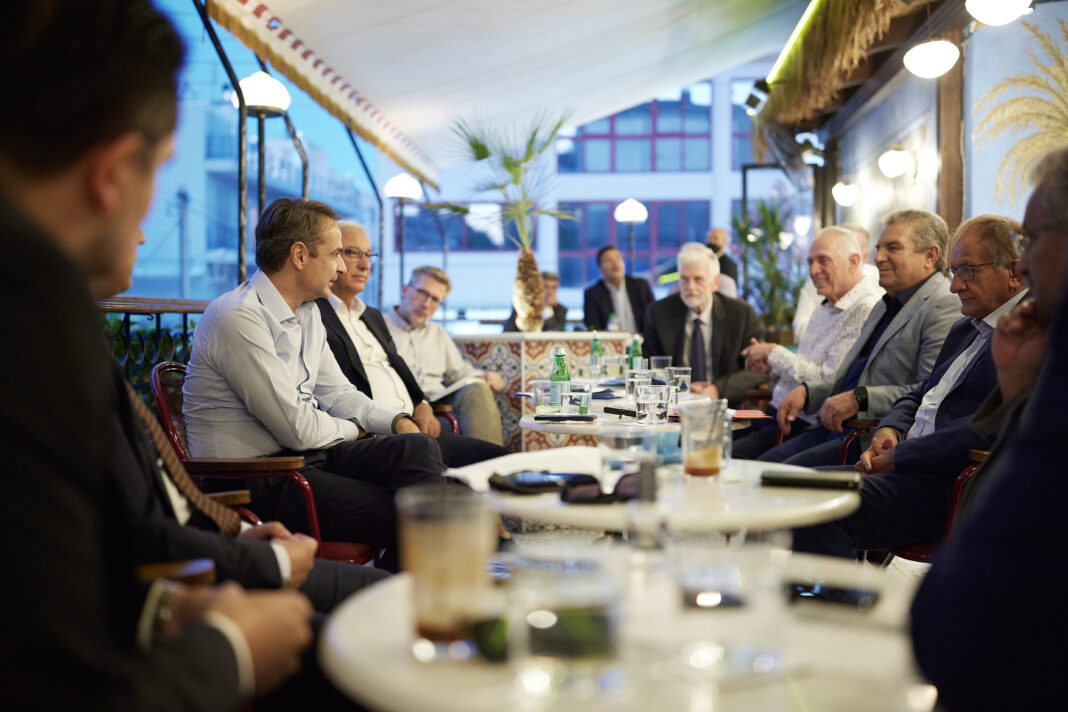 Issues concerning the municipalities of the Western sector of Athens were found in the afternoon at the center of the meeting of the Prime Minister, Kyriakos Mitsotakis with the mayors of the region, in Peristeri.

During it there was a detailed discussion on important problems that face each area separately, such as, inter alia, water supply networks, road construction projects, high voltage power lines that need underground cables, health difficulties , for issues of urban interest but also for the interconnection of the areas with the Metro.

Particular emphasis was also placed on delinquency issues facing areas and it was emphasized that better coordination is needed between the competent authorities and the Local Government in order to achieve better results.
The implementation of the "Antonis Tritsis" program was also discussed, while outstanding issues related to the lack of specific staff specialties by the municipalities were pointed out.

In view of the coming winter, the discussion also concerned the flood works that must be carried out in order to prevent major problems due to the floods.

Mr. Mitsotakis pointed out that he is personally informed about the issues that concern these municipalities since it is, as he stated, his conscious choice from the beginning of his political career to govern in this area, while today he is a member of parliament for the Western Sector of Athens.

"The truth is that the pressure of the first two years was such that a number of priorities of Western Athens are being launched at this time and I am glad that you recognize that there is a good cooperation to resolve a number of issues," said, among others, Mr. Mitsotakis

Also present were the Minister of State, Akis Skertsos, the Secretary General of the Ministry of Interior, in charge of Internal Affairs and Organization, Michalis Stavrianoudakis, as well as the MP of the Western Sector of Athens of the SW, Giannis Loverdos.

Olympiacos: For the 4/4 in SEF against Alba

Olympiakos welcomes the promoted Alba Berlin in Faliro in a match where victory is an end in itself, in order to maintain the absolute at home. To ...
Read more
GREECE

An ongoing rescue operation off Chios, after the sinking of a boat

A large operation of the Coast Guard is in progress in the sea area, east southeast of Chios, after the sinking of a boat that, according to the first ...
Read more
CIVILIZATION

The Giannis Pappas Laboratory, a branch of the Benaki Museum, is located in the area of ​​Zografou and is housed in the building that was the family home of the important creator ...
Read more
WORLD

The traffic on the descent of Kifissos from Metamorfosi to New Philadelphia is very high, while the traffic is additionally burdened by a well that has ...
Read more
SPORT CITY

The medical care was not what he should have and that is why Diego Maradona concluded. This was stated by the former lawyer of the legendary Argentine, ...
Read more
GREECE

Minus the mercury in many areas of Northern Greece

Sub-zero temperatures were recorded this morning in several places in Northern Greece, mainly in the prefectures of Kozani and Florina. The network of automatic ...
Read more

At the initiative of the Municipality of Athens and in collaboration with the historic Panhellenic Gymnastics Association, hundreds of citizens of Athens now have the opportunity to play sports ...
Read more