The Zero Point Group and the director Savvas Stroumpos, continue their tour in selected stations in September.

It is worth noting that this is the 3rd consecutive year that the show travels to selected stations throughout Greece while this summer viewers will have the opportunity to watch a new, second, version of the show.

The "Antigone" of the Zero Point Group is the result of a multi-month workshop on ancient Tragedy, which began in October 2018. For the needs of the research process and the performance, a new translation of the work was created by Dimitris Dimitriadis. 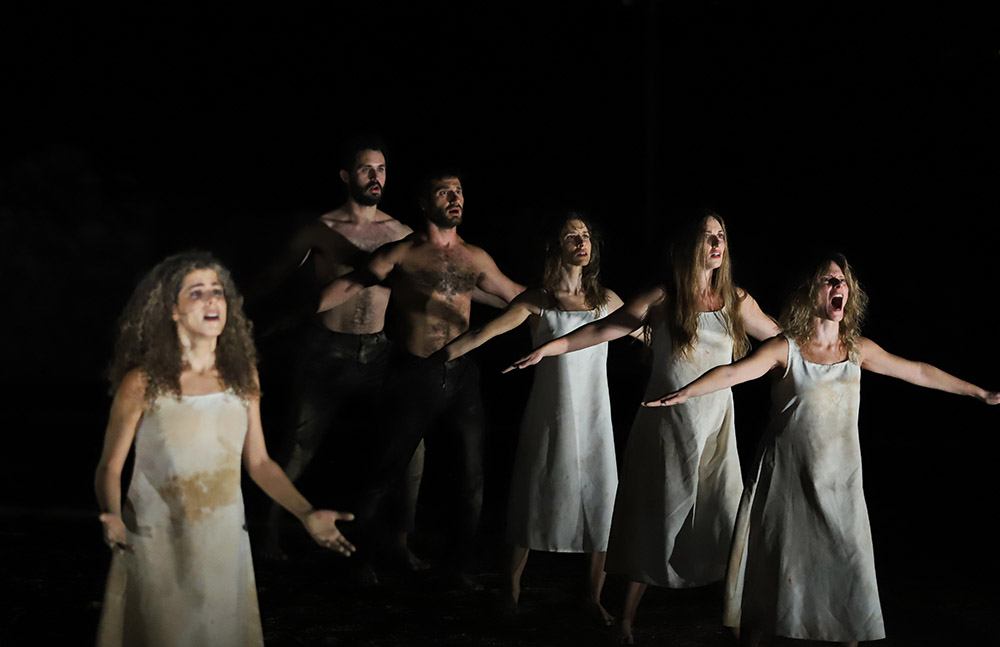 Directional Note The rationale for the show:

We see "Antigone" as a Tragedy for the Claim of Life.

Antigone's unquenchable desire to bury her dead brother despite Creon's orders does not only connect her to the world of her dead and her family. Starting with the claim of burial against the state power, it leads to the claim of new conditions for the resumption of Life in the city after the war. Antigone attempts to unite Memory and City, Existence and History, Uprising and Society.

Creon bears the triptych of power of male-state power as an absolute principle: patriarchy - military - macho. Whoever is not with him is against him. In his opinion, everyone and everything threatens him, everyone is bribed to undermine his power.

Antigone opposes, resists. Her attitude is not only about the family dimension of the issue. In the house of the Lavdakids, every act is directly political, because it directly affects the city. The optional death of Antigone is a cry of Life! He chooses death because he wants to live irreconcilably.

Our show is played right after a war. We do not see the Myth in the depths of the past, but in the Future. Can life be restarted after the war? Can man reclaim the terms of his life? War concerns the universe and has no spatial boundary. So is tragedy. Through the perspective of war we meet the ontological and biopolitical approach of the work as a constellation of tragedy within tragedy:

- The tragedy of the rebellious Man: Antigone

- The tragedy of Power: Creon

- The tragedy of the Conflict man: Ismene

- The tragedy of the Word: Blood

- The tragedy of the Prophecy: Tiresias

- The tragedy of the short-circuited man: Eurydice

- The tragedy of Submissiveness: Guardian

- The tragedy of Democracy: Dance

Dance is constantly looking for measure. It raises questions, it challenges and it self-challenges, it judges and it judges, it also undoes - it undoes. He tries with great anxiety to define right and wrong, right and wrong, the perpetrator and the victim, without any extraterrestrial authority to give clear and definitive answers. This is the Tragedy of Democracy. One can not be quiet, entrusting the responsibility of citizens and city to a god or savior: "Either we will be quiet or we will be free", wrote Thucydides.

Ancient Tragedy is a ritual theater in honor of the god Dionysus, god of fertility and violence, transformation and instincts. It comes out of the collective unconscious of society. It studies Life at the extreme limits of Nature, Existence and History. It is a biopolitical theater, which sharply criticizes the democratic state that gave birth to it, in order for this very state to constantly deepen its emancipatory characteristics.

Tragedy, the child and womb of Philosophy and Democracy, is a theater of universal challenge. It invites us to a radical re-evaluation of all the values ​​of life, with our eyes fixed on the active and emancipated citizen in constant vigilance.

Sunday, September 19 - Larissa
XNUMXnd Ancient Theater of Larissa In collaboration with the Thessalian Theater and the Ephorate of Antiquities of Larissa | In the framework of the Ancient Drama Network
Pre-sale: https://www.viva.gr/tickets/theatre/periodeia/antigoni-tou-sofokli-simeio-miden/ and at the box office of the theater 1.5 hours before the start of the show. Information: 210-3225207, 6942841714

With the support of the Ministry of Culture

USA: Two killed and four injured in shooting at a mall in Boise

Two people were killed and four others were injured in a fire at a mall in Boise, in the northwestern United States, the ... announced yesterday Monday ...
Read more
COVID-19

The US Presidential Climate Expert, John Kerry, will be in London today, Tuesday, October 26, to continue the talks ...
Read more
WORLD

Australia, a country whose subsoil is rich in carbon, announced today that it aims to reach a zero gas emission balance that ...
Read more
COVID-19

The Mexican Ministry of Health announced yesterday Monday that in the previous 24 hours 150 patients with COVID-19 succumbed and 1.121 cases of ...
Read more
COVID-19

The Ministry of Health of Turkey announced yesterday Monday that in the previous 24 hours 27.663 cases of SARS-CoV-2 were confirmed after 351.152 tests, with the ...
Read more
WORLD

The United Nations Security Council is set to meet in camera today to discuss a military coup in Sudan, officials said.
Read more