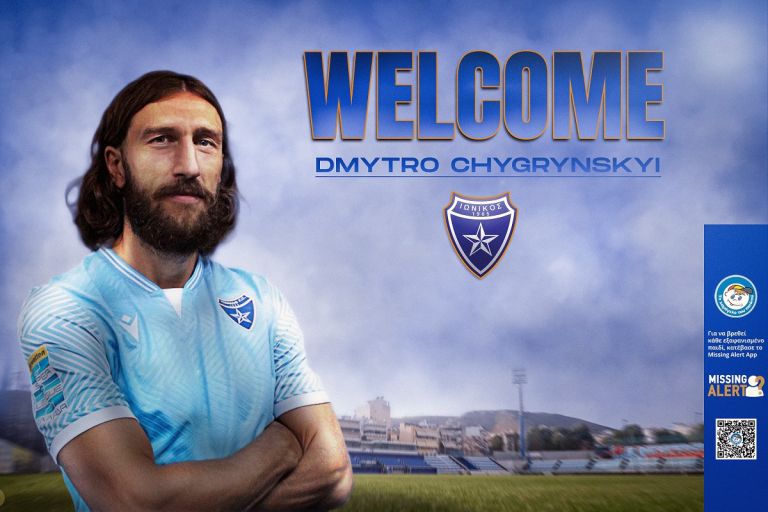 Dmitro Czigrinski, who signed a one-year contract with the Nice team, is also an official Ionian player.

Dmitro Czigrinski is now officially in Ionikos. The Nice team announced the acquisition of the Ukrainian defender for next year.

The announcement of Ionikos:

"PAE Ionikos is pleased to announce the start of its cooperation with Dmitro Czigrinski, who was at our team's offices and signed a 1-year cooperation contract.

Dmitry Czigrinski, who plays as a central defender, was born on November 7, 1986 in Iziaslav. He has to present a great career over a number of years with a total of 364 appearances (24 goals - 5 assists) at a top European level. He made his footballing debut at UFK Lviv before moving to Shakhtar Donetsk in 2002, where he made 83 appearances until 2009, playing on loan during the 2005-2006 season at Metalurg. In August 2009, Barcelona withdrew 25 million euros from its coffers to buy him from Shakhtar Donetsk. Dmitro Czigrinski stayed with the Spanish club for one season and returned to Shakhtar Donetsk the following summer for 15 million. In February 2015, he moved to Dnipro remaining a season, before coming to Greece in June 2016 on behalf of AEK. At AEK, he remained until this summer where he left as a free agent, recording 126 participations in total with 5 goals and 2 assists. He has worn the jersey of the National Team of Ukraine 29 times and has been a member of all the small national teams of his country. In his record he counts: 1 championship of Greece, 7 championships of Ukraine, 1 championship of Spain, 3 Cups of Ukraine, 2 Super Cups of Ukraine, 1 FIFA Club World Cup and the conquest of UEFA with Shakhtar.

During his presentation, Dmitry Czigrinski stressed to ionikosfc: "I am very happy to be a member of the Ionian family. I have been participating in the team's training for about a month and I want to say a thank you for the way I was received by everyone. To the president, to the coach, to my footballers and teammates. I got a great view of the team from the inside and my feelings were positive about the atmosphere and organization I saw.

Ionikos is a historic team that returned to the Super League after several years and a year begins that we will try in every match for the best. We can not aim for the titles but we can dream of great results and a good course in the championship and the cup. I believe in this team, believe in me and I will work with my coaches and teammates to achieve something good for the history of the team and the world. My wish is to have health above all, to give 100% on the field and to get where we deserve ".

The family of PAE Ionikos welcomes Dmitro Tsigrinski and wishes him health, strength and every success with the Star on his chest ".

At 6,1:08, a strong earthquake measuring 32 on the Richter scale shook the sea off the coast of Karpathos. According to the Geodynamic Institute of the National Observatory ...
Read more
984

Developments in the Eastern Mediterranean, the Cyprus issue, developments in Libya in the run-up to the December 24 elections in Syria and Lebanon are expected to ...
Read more
SPORT CITY

AEL will play against PAS Giannina with black armbands

AEL will play with black armbands in the match against PAS Giannina for the Greek Cup, honoring the memory of Thomas Bouchlariotis, the ...
Read more
984

One dead and nine injured, one of them seriously, is the report of a car accident that occurred shortly before midnight on ...
Read more