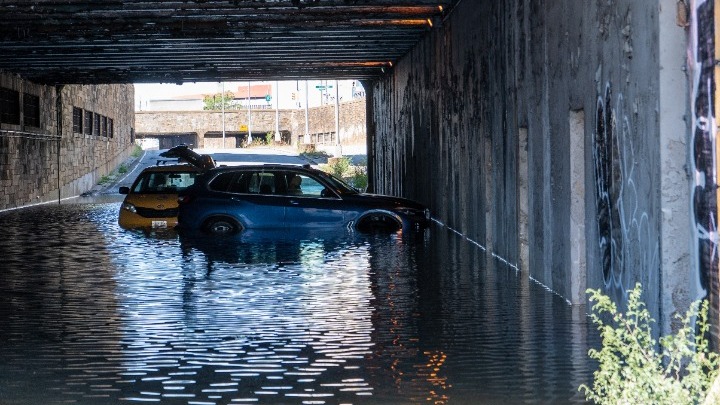 New York was in a state of disarray last Thursday, when torrential rains and flash floods of historic proportions hit the city, killing at least 41 people due to the catastrophic passage of Hurricane Aida first in the south and then in the north.

In the big city, the American economic and cultural capital, the police counted at least 12 deaths. Eleven people were probably trapped and drowned in basements, in slums with sometimes unsanitary conditions, on properties in Manhattan, Queens and Brooklyn.

The people who died were between 2 and 86 years old. The fire brigade provided assistance to hundreds of residents.

North of Manhattan, the affluent Westchester area by the sea remained flooded with muddy water; George Latimer, a local official, told CNN that three people apparently trapped and trying to get out of the car they were riding in were probably.

The worst death toll was recorded in New Jersey, facing New York, with "at least 23 people losing their lives," Gov. Phil Murphy said "with sadness." Most of the victims were flooded with hexapine while in their cars and may have drowned, the governor explained.

Near Philadelphia, three people lost their lives, according to local authorities.

Roads, boulevards, highways were transformed into torrents, in the Brooklyn and Queens neighborhoods as well as in Westchester County. In the latter, dozens of cars were submerged in muddy waters while basements of traditional, beautiful houses on the east coast were flooded with water that reached up to 60 cm.

"I think I lost everything," Marcio Rodrεςguez, owner of a workshop in the Mamaronec community, told AFP with tears in his eyes as he flooded into his shop.

The US National Weather Service (NWS) set an absolute rainfall record in Central Park: 80 millimeters in one hour.

"I have never seen so much rain"

"I am 50 years old and I have never seen so much rain," said Metodia Mikhailov, a restaurant in the chic Upper West Side neighborhood near New York's famous green lung. "It was as if I was in the jungle, tropical rain. "It was unbelievable," the businessman added.

Overnight, New York's new governor, Kathy Hawkul, declared a "state of emergency" after "major" floods in all counties within the city limits, which could affect up to 20 million people. New York Mayor Bill de Blaisio, whose city is just beginning to recover from the new coronavirus pandemic, spoke of a "historic weather phenomenon."

The declaration of a "state of emergency" due to floods is unprecedented in New York City, NWS noted.

New Yorkers were cleaning their basements yesterday, with several politicians pointing out that extreme weather was due to climate change, two weeks after Hurricane Henry and nine years after Hurricane Sandy. "Global warming is just around the corner and will only get worse if we do nothing," warned New York Democratic Sen. Chuck Sumer.

Extreme weather conditions are common in the United States. But rising ocean temperatures are causing much stronger cyclones and hurricanes, scientists warn.

They are increasing the level of risk for coastal communities, they add.

Cyclone Aida, which was downgraded to a tropical storm, continues its course to the north, located above New England.

US President Joe Biden is expected to visit Louisiana, the southern US state hit by Cyclone Aida on Sunday, destroying many buildings and cutting off power to some one million households. "We are all in this together. "The nation is ready to help," said the White House resident.

Olympiakos prevailed 83-68 over Zalgiris Kaunas at SEF for the 4th game of the Euroleague. For about 15 minutes Zalgiris Kaunas seemed capable ...
Read more
IT HAPPENS IN ATHENS

In a city where at least 40% of the inhabitants rent a house, the issue of the rapid increase of rents is definitely a headache for many ...
Read more
GREECE

Corfu: Prisoner attacked EKAB rescuer with an iron grate from a well

An inmate attacked an EKAB rescuer with an iron shaft. The incident happened in the courtyard of the Corfu penitentiary, when his rescuers ...
Read more
WORLD

Former US President Bill Clinton is being treated in a California hospital today, where he is recovering from an infection, which is not related to ...
Read more
News Bulletin Athens 9.84

Intense weather phenomena are currently being detected in Northern Greece. In the Municipality of Lagada, after the heavy rains, the stream overflowed in the village of Zagliveri ...
Read more
984

In a city where at least 40% of the inhabitants rent a house, the issue of the rapid increase of rents is definitely a headache for many ...
Read more
984

The rainfall in Attica from the bad weather "Ballos" was strong, causing a multitude of problems in the city of Athens. According to the records of the network of automatic ...
Read more
984

Due to the subsidence of the road, the traffic was stopped on Papanikoli Street in the current towards Chalandri from the height of the intersection with the street ...
Read more
CIVILIZATION