D. Fatouros: The aim of the exhibition "Repatriation - 200 Years of Greek Art" is to present a piece of Hellenism in the Diaspora that has never lost its Greekness 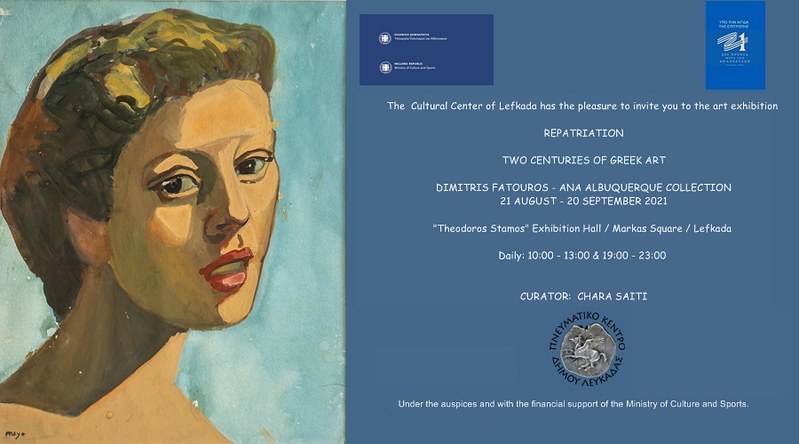 For the report “Repatriation - 200 Years of Greek Art” Which organizes the Cultural Center of the Municipality of Lefkada in the context of the Festival of Speech and Art 2021 from on August 21 to September 20, 2021 and which is under the auspices and financial support of the Ministry of Culture and Sports and the Commission "Greece 2021", The collector Dimitris Fatouros spoke in Athens 9.84 and in Eleonora Orfanidou.

As the title of the exhibition presupposes, curated by Mrs. Hara Saiti, visual artist and art theorist and Vice President of the Cultural Center, concerns the repatriation of 51 works from the collection of Dimitris Fatourou and Anna Albuquerque, to the country of origin of their creators to meet for the first time with the Greek public, under the Greek light.

According to Mr. Fatouros, These are works that have three common characteristics as they were acquired from private collections outside Greece, without having been exhibited in our country so far, while their creators are Greeks who lived abroad in the 19th and 20th century.

«My family and I have collected a number of paintings, works of art by Greek artists, mainly from abroad, of the 19th and 20th century and we start from Lefkada with the official opening next Monday, August 23 at 20.30 in Theodoros Stamos Hall. We present a 200-year-old art that goes hand in hand with the establishment and development of the modern Greek state, starting from the first post-revolutionary painters and reaching up to the modern ones ".

He stressed that the primary goal is "to show the progress of Modern Greek Art which is a part of European and world creation and at the same time the evolution of the Greek state and to send a message of optimism that many amazing things were done that no one would have imagined but also to present a piece of Hellenism of the Diaspora who may have been born elsewhere, but never lost his Greekness ".

"We hope this trip will be a great journey that will make us all better, to climb a little higher", pointed out Mr. Fatouros.

Alabama authorities executed last night, Thursday night, an African-American man who had been convicted 30 years ago for the murder of a white woman ...
Read more
News Bulletin Athens 9.84

The European Council decided yesterday without a specific decision regarding the management of the energy crisis. The issue has divided European leaders who simply ...
Read more
200 YEARS OF HISTORY

U (R) TOPIAS: The Aerites at the Olympia Municipal Music Theater Maria Callas

Worldwide, Depressive and Anxiety Disorders Due to Pandemic

Worldwide, depressive and anxiety disorders worsened during the COVID-19 pandemic, according to a clinical study. The relevant publication in the magazine "The ...
Read more
984

"It is at least an oxymoron that a country, which threatens Greece with war if our country applies its legal rights, almost violates ...
Read more
IT HAPPENS IN ATHENS

The passengers who use the bus in the morning are faced with "suffocating" conditions, as the prevailing overcrowding abolishes any notion of protection measure from ...
Read more
WORLD

A new video has been released on the internet with the alleged protagonist of a senior member of the "Democratic Party" of Serdar Dektas in the pseudo-state. A little 24 hours after the pictures with ...
Read more