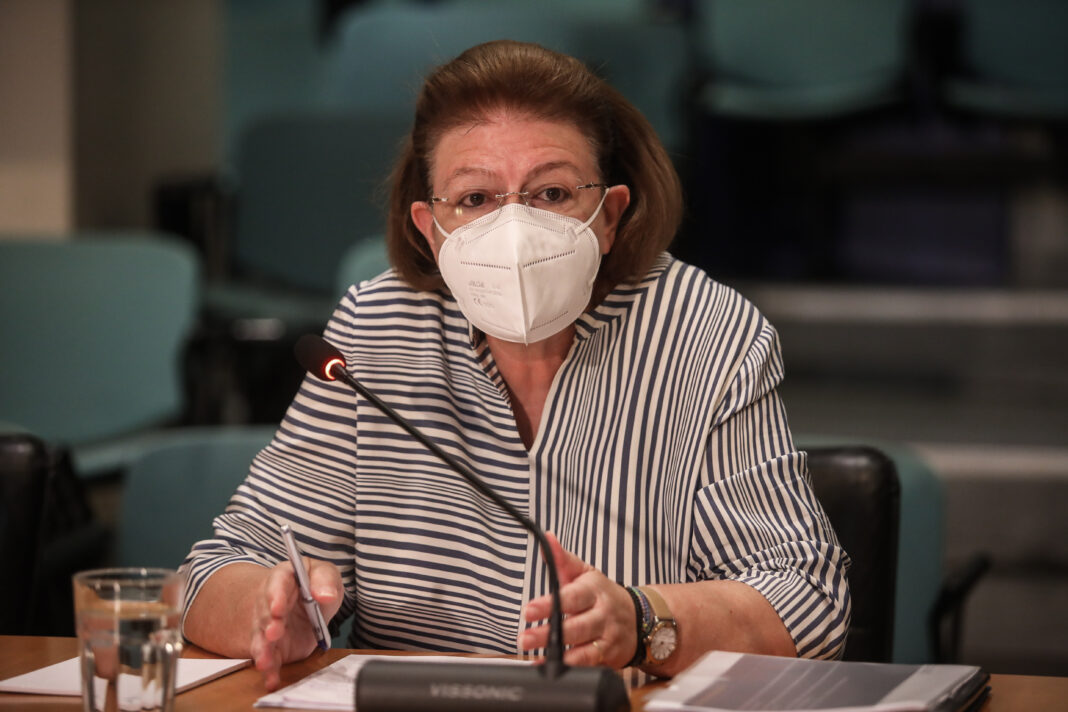 "It is clear that we have faced an unprecedented situation, not only in terms of monuments and cultural heritage. What we experienced last week with fires across the country was really unprecedented.

"I confess that those of us who were by the fire can not easily forget the images we experienced, which have a great deal of ecological damage, mainly", said the Minister of Culture and Sports, Lina Mendoni, during today's press conference.

"We lost a lot of the forest. It is not insignificant, it is not easy to accept. In cultural monuments, the losses were not great. "Thanks to the intervention of everyone, mainly the Civil Protection, the Fire Brigade, ELAS, the coordinated efforts of our services, the damage was reduced to the least possible", the minister stressed, adding that "at the moment we are moving forward and accelerating the procedures we have undertake as Ministry of Culture for the implementation of our plan for the restoration of buildings, as provided by the Sustainability Study. At the same time, we have already commissioned the study for the systematic and correct reforestation of the historic core - and in its very narrow sense, of 1.600 acres, but also in the wider 6.000 acres.

The study is already starting and the necessary scientific team is being formed, which will be announced soon. "Reforestation procedures of the historic core are not a normal reforestation because we have to deal with two main parameters: the historicity of the estate and addressing the problem of climate change", the minister noted.

The fire caused damage to seven buildings, which, according to the minister and officials who attended the interview, do not create more structural problems than they already had. "Roofs were burnt -some of which were newer rescue operations of the Ministry of Education and Science and some were half-destroyed, so wooden elements were burned-, as well as wooden frames which in many cases had been restored in previous years by the Ministry of Culture or were false windows", informed L. Mendoni. These are the Sturm and Carer Houses, as well as the Telecommunications, Tomb Guard, Personnel, Forestry and Directorate buildings.

As the Minister informed, all the resources for the restoration of the specific buildings in Tatoi are provided by the NSRF and the Recovery Fund. Specifically, the Sturm House, the Carer and the Telecommunications building have been included in the NSRF since 2020. It is foreseen that in the first half of 2022 they will have a contractor and their restoration will be done with the study-construction method and responsibility of the competent directorate of the Ministry of Culture.

For the buildings of the Tomb Guard, Personnel, Directorate and Forestry, the studies start immediately, while the relevant order has already been given to start the study of the Directorate with self-supervision by the Ministry of Culture.

According to L. Mendoni, it is estimated that these studies will be completed by the end of 2021 with the beginning of 2022, and their resources are secured by the NSRF 2021-2027. Also, as she stressed, the current NSRF has included the ongoing studies of the networks and infrastructure of the estate, which concern the sewerage, water supply, biological treatment, fire protection and firefighting - their resources have been included in the approved by the Recovery Fund project and is of the order of 20 million. As the Minister of Culture noted, in each building in which studies are carried out, have been completed or are in the auction phase, a study is foreseen that includes fire detection and firefighting.

The objects found in containers in Tatoi are intact

Regarding the more than 100.000 objects that are preserved and recorded by the Preservation Service of Ancient and Modern Monuments of the Ministry of Culture and Sports and which are in containers in the area of ​​the estate, the minister stressed that they remained intact from the fire. A problem arose in three "huts" that were very close to the Palace. One was an outpost, the second hut was partially destroyed, while the third, which was completely destroyed, contained items of little value and in poor preservation.

As it became known by the minister and the officials, the material it contained had already been evaluated by the Directorates of Conservation and Modern Cultural Heritage of the Ministry of Culture and Sports and the objects that were considered important and remarkable had been transferred to other places. In this hut there were cooking utensils, various appliances, such as a Singer sewing machine and fireplace protectors, which do not present particular problems after the fire. It also included a second sorting of the cellar and paper material (printed matter, books) that had been deemed not particularly remarkable.

Asked about the items that were recently removed from Tatoi for protection reasons, the minister replied that they were items that could be easily stolen if there was a problem in one of the containers.

When asked why objects from Tatoi that had been transferred in 2016-7 to the Museum of Modern Greek Culture returned to the estate, as well as why not all movable objects were transferred for reasons of protection outside the estate, the minister and officials replied that the return to Tatoi of approx. 6.000 objects from the Museum of Modern Greek Culture were made for reasons of unity of objects - it was emphasized that a solid unit of objects had not been transferred, while for the transfer there was no approval and consent of the competent directorates of the Ministry of Culture - and the total volume of objects - enrichment of which has not yet been completed - is so large (exceeds 100.000 objects, including carriages and cars) that it would not be easy to find a building to house them.

Regarding the condition of the archeological remains of the ancient fortress of Dhekelia (Paleokastro), which is located inside the estate, the minister stated that he does not present any problem from the fire, while regarding the archeological sites and monuments in Peloponnese and Evia, the information from the competent Ephorates of Antiquities that in Evia we have almost no problems until today, and in Laconia the problems that arise in some post-Byzantine temples are extremely limited.

Having achieved a great victory, this year's "World Day of Persons with Disabilities" will be celebrated by people with disabilities living in Greece, as it was satisfied ...
Read more
984

December 2021: The latest pending issues with the tax office and those required for additional declarations

Hundreds of thousands of taxpayers have just 28 days to settle their pending issues with the tax office for 2021, as in addition to ...
Read more
IT HAPPENS IN ATHENS

The extension of the operating hours of the fixed-track means on the lines returns, from today, Friday, December 3, 2021, and for every Friday and Saturday ...
Read more