Battle with the flames in Evia, Ilia, Grevena, Messinia and Fokida - Settlements evacuated 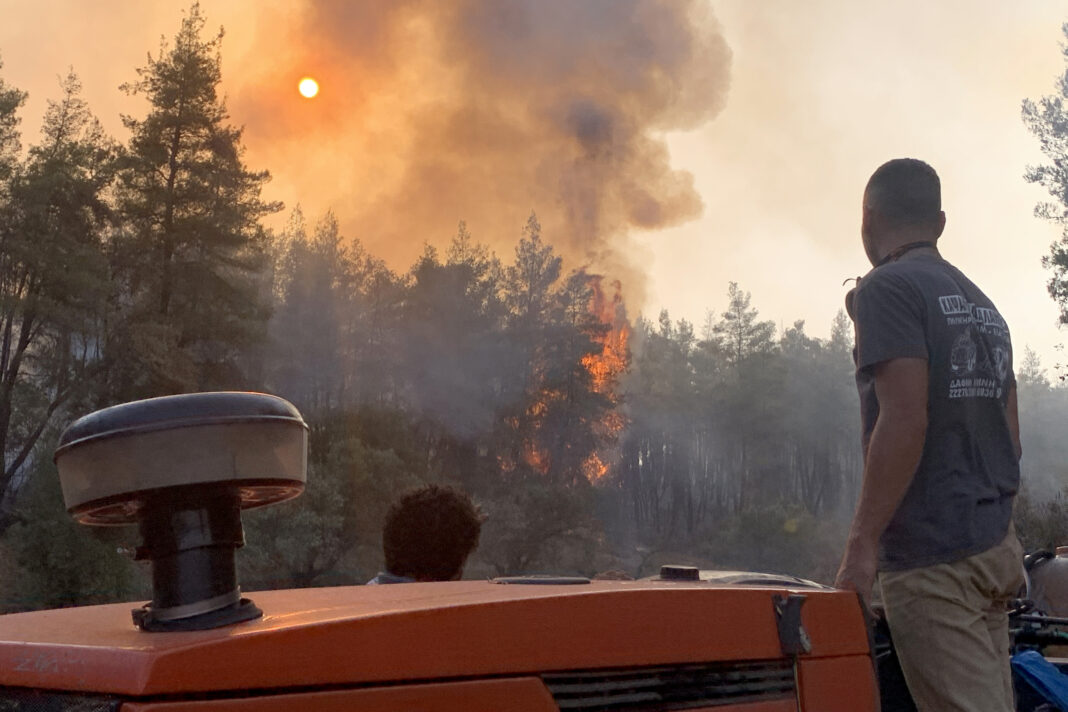 Revival of the fiery flame in Ilia, Evia, Messinia, Fokida and Grevena.

"Ilia is being tested once again", stresses in his message, on the occasion of the fires, the deputy governor of Ilia, Vassilis Giannopoulos and adds: "From Wednesday, August 4, a truly superhuman effort is being made by all the forces of the Fire Brigade , of the Civil Protection, of the region of Western Greece, of the municipalities and the army, in order to stop the fiery front ". At the same time, the vice-governor points out that "the contribution of the inhabitants of the affected communities is crucial, who with self-denial and self-sacrifice, try to protect their lives and property".

Referring to the causes of the fire, he claims, among other things, that "the course of the fire and its characteristics prove, without any doubt, that this is an organized arson plan, a plan to harm our place, lives, natural and cultural our wealth ". "The competent authorities," he continues, "are already investigating the conditions of the fires."

He also appealed to all citizens to "be especially careful", on the occasion of the fact that tomorrow, Friday, August 6, the General Secretariat for Civil Protection provides a risk index 5 (alarm state), with extremely difficult weather conditions, which maximize the risk of new fires occurring and spreading ". Meanwhile, according to what the deputy governor said in APE - MPE, "the preventive evacuation of several communities is being done with obstacles, since there are many residents who want to stay in their homes, in order to try to protect them from the fire."

Also, according to information, police and firefighters evacuated residents from communities that had to be evacuated due to the fire, while a camp in the area of ​​Frixa was evacuated in time.

Fire in North Evia: Agony for the villages Amelantes, Skepasti surrounded by flames

The villages of Skepasti and Kerameia, on the east side of the fire fronts in Northern Evia, are currently one step ahead of the flames. The fire is moving at high speed and strong forces of the fire brigade, pedestrian units, as well as earthmoving machinery have rushed trying to keep the flames away from the houses.

"The protection of human life is paramount at this time. We are evacuating the endangered villages and we remain on the fire front with fire trucks, water tanks and bulldozers to save houses and property ", says the Regional Governor of Sterea Fanis Spanos, who is currently in charge of two villages in APE-MPE.

Mr. Spanos addresses "a warm request to everyone to follow the instructions of the Fire Service and the security forces".

Recently, an announcement was made by the mayor of Mantoudi-Limni and Agia Anna, George Tsapourniotis, asking the residents of the villages of his municipality to evacuate all the villages on the east side, noting that "unfortunately the efforts to extinguish the restriction of the large fronts Amelantes and Skepasti did not perform with the result that the fire remained uncontrollable.

Evacuate now the entire eastern front of our municipality and specifically of the Municipal Unit of Nileos because the fire has taken uncontrollable dimensions ".

At the same time, firefighters are facing new and renewed fires, especially dangerous to the village of Paleovrisi, while the Sterea Region is now preparing the new line of defense overnight. This time, however, in the village of Agia Anna. In addition to the evacuation of residents and holidaymakers who wished, three large aquifers have been installed in an equal number of gas stations in the village of Agia Anna, so that there is no risk of flames approaching the facilities.

"The situation with the fires in Messinia is extremely difficult," Stathis Anastasopoulos, the deputy regional governor, told the Athenian-Macedonian News Agency, adding that "two new fires broke out in the Mouzaki and Antheia areas late in the afternoon."

Regarding the fire that broke out yesterday afternoon in Melpeia, the deputy governor told APE-MPE that "at noon the fire front moved east and reached the community of Karnassi".

He added, "The fire went through the community, causing damage, but the catalytic intervention was a firefighting helicopter that made continuous drops, as it was supplied with water very quickly."

The fire in Karpero, Grevena, is now out of control, as it passed on the opposite side of the Aliakmonas river. The fire, which spread over an area of ​​about 30 kilometers, was rekindled due to the intensification of the winds. The settlements of Nisi, Agaleoi, Kentro, Diporo are being evacuated, while the fire is moving towards the area of ​​Venzia. A resurgence also occurred in Rhodes, in the "Beverano" area. Strong firefighters have rushed to the scene.

🆘 If you are in the settlements #Centre, #Island, # Agalaioi, # Δίπορο # Γρεβενών, empty now to #Willow.

The front of the fire in Fokida has taken on huge proportions, since it has now spread to the area of ​​Tolofonas.

A little while ago, an order was given to evacuate Tolofonas with messages that the residents located in the wider area of ​​Dorida received on their mobile phones from 112 of the General Secretariat of Civil Protection. At the moment, local government and police are trying to inform the residents and remove them.

Previously, the villages of Elea and Kallithea had been evacuated in two phases as the fire passed next to the villages and burned some houses around the villages.

"Our main concern is to save the people, for this we are proceeding with safe evacuations of the villages" says the vice-governor George Delmouzos in APE-MPE and as he adds "the strong winds of the area lead the fire to the beach of Agios Spyridon. The night will be far away tonight. "

It should be noted that the huge front of the fire has become visible from the opposite side of the Corinthian in the region of Akrata.

🆘 If you are in #Olive # Φωκίδας evacuate now to #Kalithea

🆘 If you are in #Kalithea # Φωκίδας evacuate now to # Άγιο_Σπυρίδωνα

Rhodes: The resurgence in the area of ​​Kalamonas was brought under control

The resurgence that had occurred earlier today in the area of ​​Kalamonas in Rhodes was brought under control.

To bring it under control, water was fired from the firefighting helicopter, while at the same time strong firefighters and volunteers rushed to the scene of the resurgence.

It is noted that for the fifth day today all the staff of the Fire Service and the volunteers are still on the front lines of the fire, trying to deal with the re-ignitions that occur in various places.

Moderna Inc. CEO Stefan Bancell believes that the new coronavirus pandemic could end in a year, as the ...
Read more
NEWS

The number of cases of coronavirus in the student community is causing concern and obvious concern to the leadership of the Ministry of Health. According to official figures ...
Read more
WORLD

Researchers from the USA, China, South Korea and Britain reduced a chip the size of a grain of sand and added feathers, ...
Read more
WORLD

The diplomatic "relaxation" in US-French relations, the elections in Germany, the sudden "rift" within the People's Party of Spain and a strange ...
Read more
ECONOMY

From 2022, the frozen accounts of public debtors are "thawing"

In the gradual, and under certain conditions, release of their bank accounts which were pledged for debts to the public proceeds from the beginning of 2022 in ...
Read more
CIVILIZATION

I would like but how much I would like yes I would like right now now I want * We want / yes, we want the obvious that are not given. We want to get scared, ...
Read more
News Bulletin Athens 9.84

Diplomatic marathon and crucial consultations in New York, on the sidelines of the UN General Assembly. Strict message from Washington to Ankara. According to diplomatic ...
Read more

Unknown people attacked, late last night, Wednesday night, a group of team fans, in Kato Patisia. According to ELAS, clashes followed with the people who ...
Read more
IT HAPPENS IN ATHENS

The Hellenic Mountaineering Association of Acharnes (EOS) was founded in 1976, by nature lovers of the city of Acharnes due to the proximity of the place to Parnitha. THE...
Read more