The fire is raging in Rhodes - Evacuations of settlements 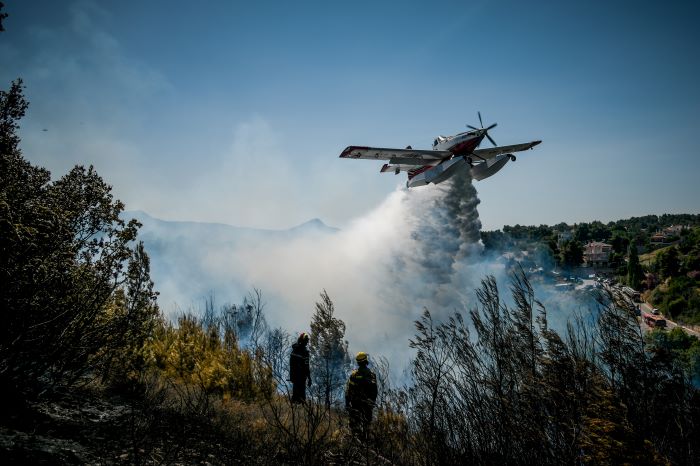 The island of Rhodes had a difficult night. The fire, despite the many hours of efforts during the day, has not been controlled, it is raging in the wider area of ​​Maritsa-Psinthou, having caused serious damage.

To deal with it, firefighting planes will start shooting again, with the first light of day; in the area, strong firefighters and volunteers remain and continue the battle with the flames at night.

According to information, there are three fiery fronts. As announced by the governor of the South Aegean, they have already started a ship from Piraeus with reinforcements of the fire brigade and from Crete with technicians.

"We ask the citizens to limit their travel to what is absolutely necessary", they state in a statement issued by the Region and the Municipality of Rhodes.

With its announcement, HEDNO announced that the gradual restoration of electricity in the city of Rhodes has begun. The technical staff, in cooperation with PPC and in coordination with the Civil Protection, is making intensive efforts for the reintegration of all units as soon as possible.

"Efforts to restore electricity to the islands of Rhodes and Halki are continuing feverishly," HEDNO assured in a press release issued last night.

Due to the fire and the drops of water from the air to extinguish it, serious problems were created in the High Voltage Network and the Rhodes National Power Plant and then the Soroni Power Plant were shut down, resulting in the general power outage of the Rhodes-Halki complex. , explains.

"About an hour ago, the gradual re-electrification of consumers in the city of Rhodes began and all HEDNO technical staff, in close cooperation with PPC and in coordination with the Civil Protection, is making superhuman efforts for the reintegration of all units as soon as possible. ", It is added.

The three fiery fronts that broke out late last night in the area of ​​Nea Makri are in recession. The flames reached the yards of houses, ...
Read more
984

People over the age of 60, the elderly in care units and the health workers can now schedule their appointment for the 3rd ...
Read more
984

The fire is in recession the two fire fronts that broke out late last night in the area of ​​Nea Makri. The flames reached ...
Read more
984

After the revival for the third time of the reintegration in the old regulations of the 100-120 monthly installments of those debtors affected by the pandemic who lost them from ...
Read more