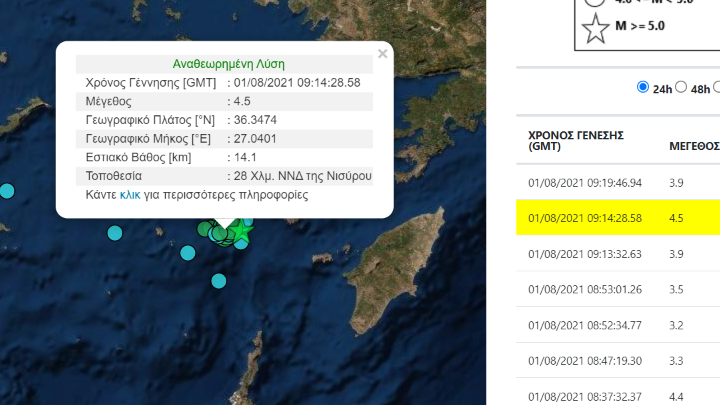 A fifth earthquake, from last night Saturday, in the sea area of ​​Nisyros, was announced by the Geodynamic Institute of the National Observatory of Athens.

Specifically, the seismological network of the Institute, recorded at 11:37 a seismic tremor with a magnitude of 4,3 on the Richter scale while its epicenter is located in the sea area 30 kilometers south-southwest of the city of Nisyros.

Two more earthquakes, measuring 4,7 and 4,1 on the Richter scale, were recorded at 22:57 on Saturday and at 02:25 today Sunday, respectively 26 and 27 kilometers south-southwest of the island.

No damage has been reported so far.

Vaccines against Covid-19 protect cancer patients, the European Society of Medical Oncology assures based on new studies that confirm that ...
Read more
984

The Governor of the Bank of Greece appears more optimistic than the Government about the course of the Greek economy. Giannis Stournaras in an interview that ...
Read more
WORLD

The group "will soon come out of its darkest moment" said the founder of the giant Chinese real estate group Evergrande, which is located in ...
Read more
984

Deadline, most likely the last one, until September 30 will have those who lost the old settings of 100 and 120 installments, to re-join ...
Read more