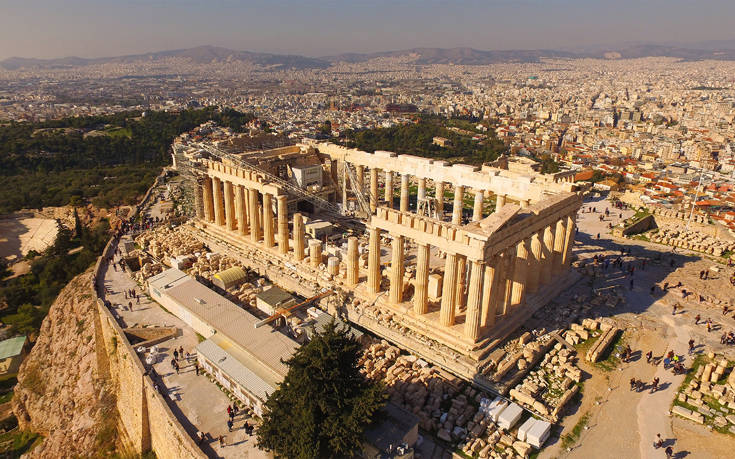 Drone flights over the Acropolis and Omonia Square using a thermal camera were carried out today by the Up Stories team, in collaboration with the meteo of the National Observatory of Athens.

It was found that as the heat wave that affects the whole country is in full swing, the phenomenon of the Urban Thermal Island is becoming more and more intense every day, especially in Athens.

At the Holy Rock of the Acropolis, the ground temperature exceeded 55 degrees locally, as well as in the historic center of Athens, in Omonia Square. At the same time, the air temperature, according to the meteorological stations of the National Observatory of Athens / meteo.gr in the center of Athens, ranged between 36-37 ° C.

The highest temperature values ​​were recorded on the asphalt and on the roofs of old buildings with air conditioning units (over 60 degrees), while the lowest values ​​on the facades of new buildings and the new fountain in Omonia Square (up to 35 degrees).

Fire in Nea Makri - Houses are being evacuated

The Fire Brigade has been sounding the alarm for a while now in a fire in Nea Makri. 25 fires with 11 vehicles have rushed to the spot. According to the fire department ...
Read more
WORLD

European Council President Charles Michel today denounced the "lack of confidence" and "opacity" on the part of the United States in the submarine crisis ...
Read more
News Bulletin Athens 9.84

The US President will try to set the tone with France tomorrow before the UN General Assembly. According to a high-ranking official ...
Read more
SPORT CITY

Federer: "The worst is behind me"

Roger Federer appeared optimistic about his quick return to the field in his statements during an event of his central sponsor in Zurich. THE...
Read more
GREECE

The body of a woman, unknown until now, was found at noon today, in the sea area about 1 nautical mile outside the park of Floisvos P. Faliro. With the...
Read more
WORLD

AstraZeneca vaccinated will be able to travel to the US

Europeans vaccinated against Covid-19 with AstraZeneca will be able to travel to the United States in November despite ...
Read more
SPORT CITY

Greece without Petrounia in the World Instrument

With six athletes and without Lefteris Petrounias, Greece will participate in the World Instrumental Gymnastics Championship of Japan, 18-24 / 10. EGO announced the names ...
Read more

Fire in Nea Makri - Houses are being evacuated

The Fire Brigade has been sounding the alarm for a while now in a fire in Nea Makri. 25 fires with 11 vehicles have rushed to the spot. According to the fire department ...
Read more
CIVILIZATION