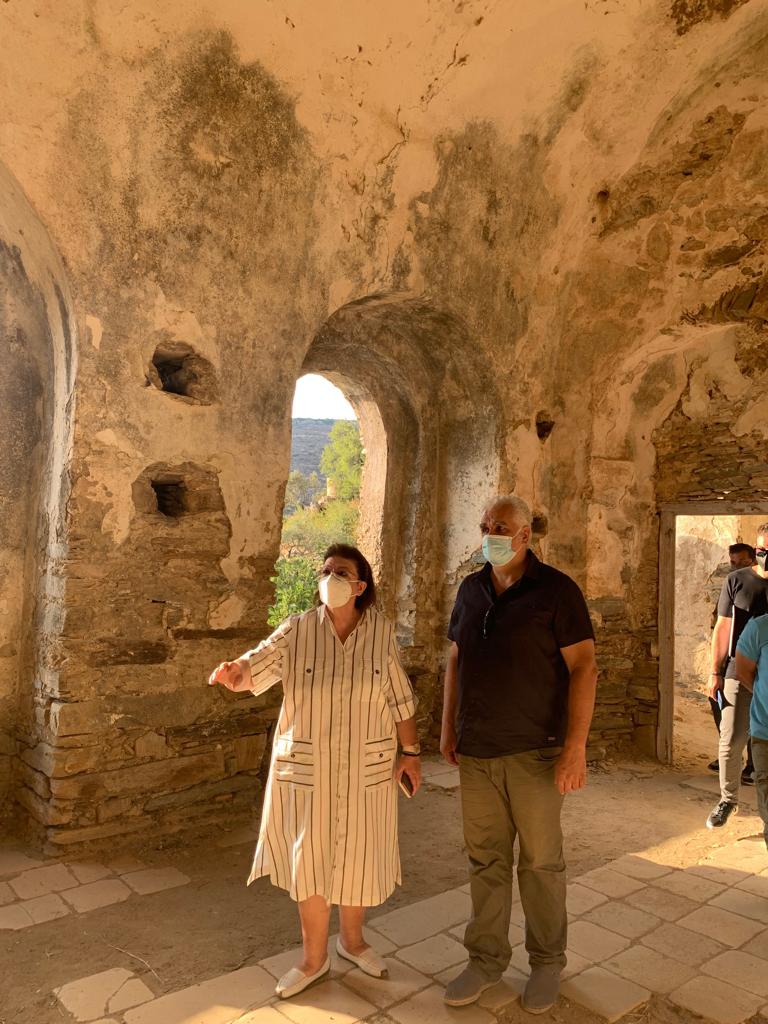 The Minister of Culture and Sports, Lina Mendoni, conducted an autopsy on cultural projects in Naxos, as part of her tour of the Cyclades. Lina Mendoni conducted an autopsy on the project "Museum Island in the Castle of Naxos Town", which is performed by the Ephorate of Antiquities of Cyclades. The project is funded with five million euros from the Regional Operational Program of the South Aegean 2014-2020, while additional resources are available from the budget of the Ministry of Culture and Sports.

The Museum Island in the Castle of Chora includes the restoration of the monumental shell and the upgrade of the old Archaeological Museum of Naxos, the Aviation Building and the Glezos Tower. The museum complex includes the Archaeological Museum of Naxos, with exhibits from all periods of antiquity, except the Early Cycladic, which will be exhibited in the Aviation Building creating a thematic-chronological museum dedicated to Cycladic Culture. The extremely important frescoes from Byzantine temples of the island will be exhibited in the Glezos Tower, creating a unique painting exhibition of the Byzantine period. The project is planned to be gradually delivered to the public with a horizon of completion by the end of 2023. 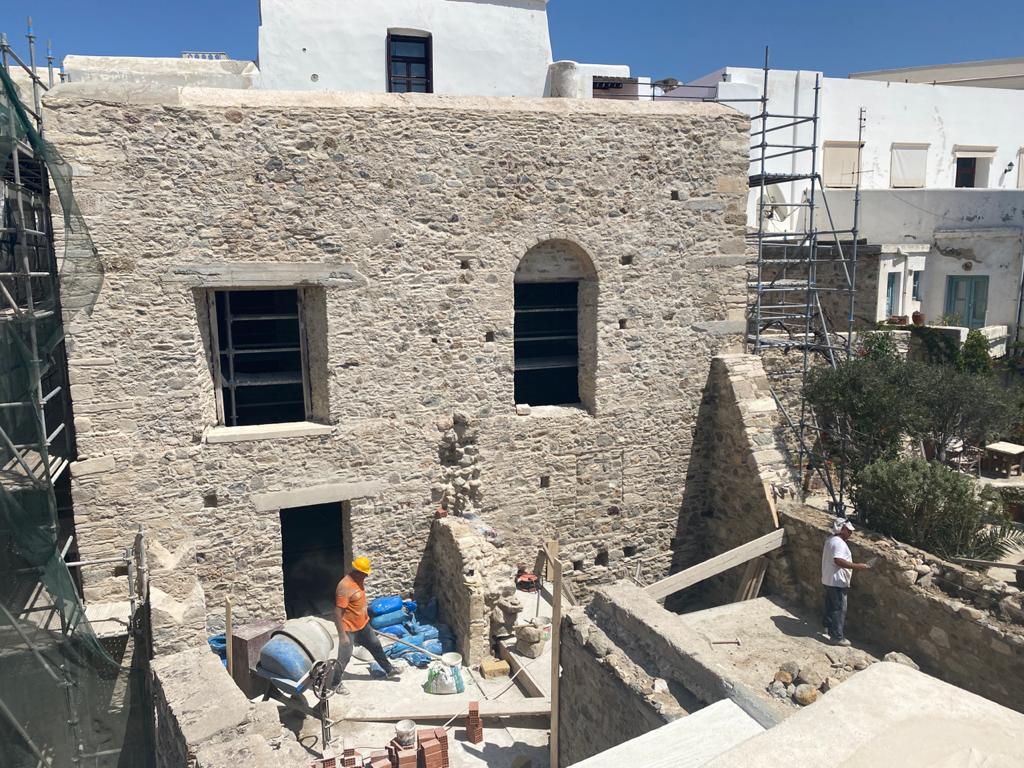 According to the Minister of Culture and Sports, "the project of upgrading the building to the monumental shells of the Castle of Chora, the old Archaeological Museum of Naxos, the Aviation Building and the Glezos Tower, creates a set of museum infrastructure unique to the Aegean. With this project, however, not only museum infrastructures of modern standards are created, in essence, the Castle itself is upgraded and highlighted, as dilapidated buildings or subterranean underground spaces are restored and made functional. At the same time, an important resource is created, which can work extremely efficiently for the development of the island ".

The Archaeological Museum of Naxos is housed in a 13th century building. in the center of the Castle of Chora, probably part of the palace of Markos Sanoudos, which was later transformed into a School of Commerce where Nikos Kazantzakis also studied. It includes, after the National Archaeological Museum, the most important prehistoric collection in Greece. Its content dates from the Late Neolithic era to the 7th century. A.D. and comes from Naxos and the Small Cyclades, Schinoussa, Donoussa, Koufonisia, Heraklion. 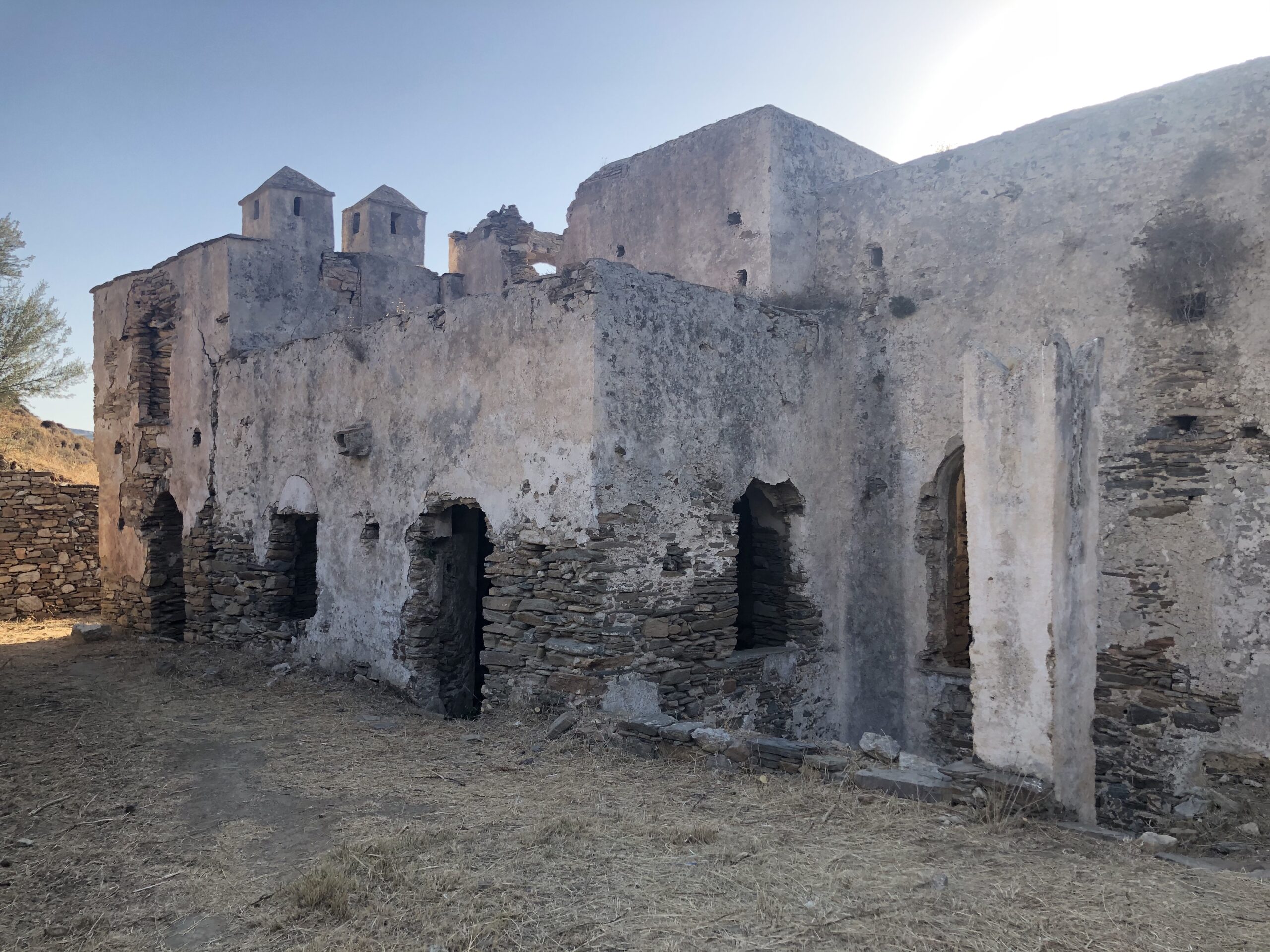 The "Jesuit Resort" in Kalamitsia, an imposing building complex, built in 1680 by Robert Saulger, abbot of the Jesuit order of Naxos, was visited by Lina Mendoni. The complex includes the central part of the building, auxiliary spaces and a courtyard, where outbuildings, stables, kitchens, warehouses are kept. Today the band is facing severe static problems and damage. During the autopsy, Lina Mendoni discussed with the representative of the Naxos Catholic Foundation "The Holy Cross", Iakovos Nafpliotis, the possibility of restoring the complex by preparing the necessary studies and seeking funding in order to provide new uses. The restoration of the Chimarros Tower and its surrounding area, in the Za mountain range, is an important obligation for the services of the Ministry of Culture. It is a circular marble tower of the 4th c. BC, with a diameter of 9,20 m, which is preserved at a height of 14 m., while its original height is estimated at 17 m. It is one of the three respective towers of the Cyclades - Agia Marina Tower in Tzia and Agios Petros in Andros- which are preserved at such a great height. In this precinct of the Tower, as is the case in most of these monuments, laboratory and storage areas of different eras have been discovered until late antiquity.

According to Lina Mendoni, in the first week of August, the Ephorate of Antiquities of the Cyclades, after completing the procedures for the supply of the necessary materials, begins the removal of the old worn scaffolding and the installation of a new one, in order to begin the necessary work to restore the emblem. for the mountainous Naxos - which is a request of decades of the local community. As soon as the expropriation of the site is completed, the restoration works will proceed with funding from the Ministry of Culture and Sports, while the procedures for the electrification of the monument will begin immediately, so that the construction site can function properly. 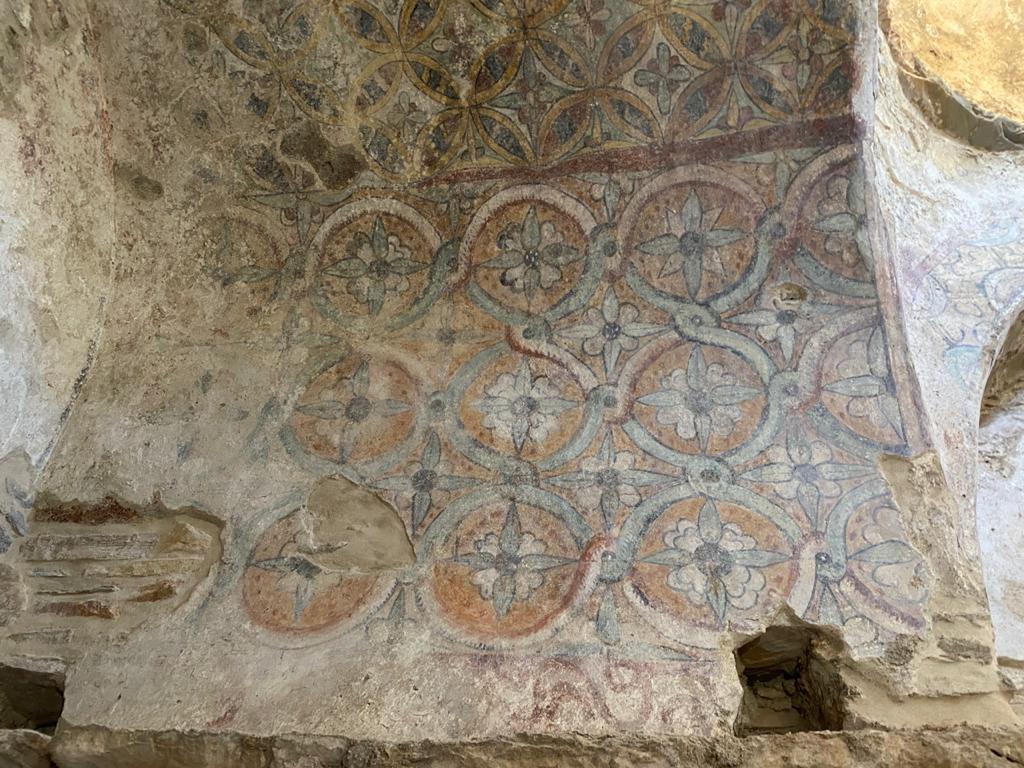 The autopsy of the Minister continued in Byzantine monuments of the island, in which protection, maintenance and restoration works are carried out by the Ephorate of Antiquities of Cyclades. Agios Ioannis Theologos, in Danakos, with the iconic decoration (8th-9th century), Agios Ermolaos Apeiranthos with also iconic decoration and Agios Ioannis in Afikli Apeiranthos, also with the impressive iconic decoration, but also important , compose with new valuable elements the image of Byzantine Naxos. All the works are implemented with self-supervision by the competent Ephorate of Antiquities, national resources of the Ministry of Culture and Sports, while the restoration of Agios Ioannis in Afikli is courtesy of Athanasios and Marina Martinou. Of similar importance is the iconoclastic church of Agia Kyriaki Apeiranthos, which was restored and maintained earlier by the Ephorate. The project was awarded the European Grand Prix by Europa Nostra for its exemplary restoration. In Apeiranthos, the Minister of Culture and Sports visited the Archaeological Collection with the particularly important prehistoric antiquities, which, however, needs a significant upgrade. Together with the Mayor of Naxia, Dimitris Lianos, Lina Mendoni conducted an autopsy on a half-ruined building on the main street of Apeiranthos and announced its restoration through the "Antonis Tritsis" program, in order to house - based on a museological study Archaeological Collection enriched with new very important findings. 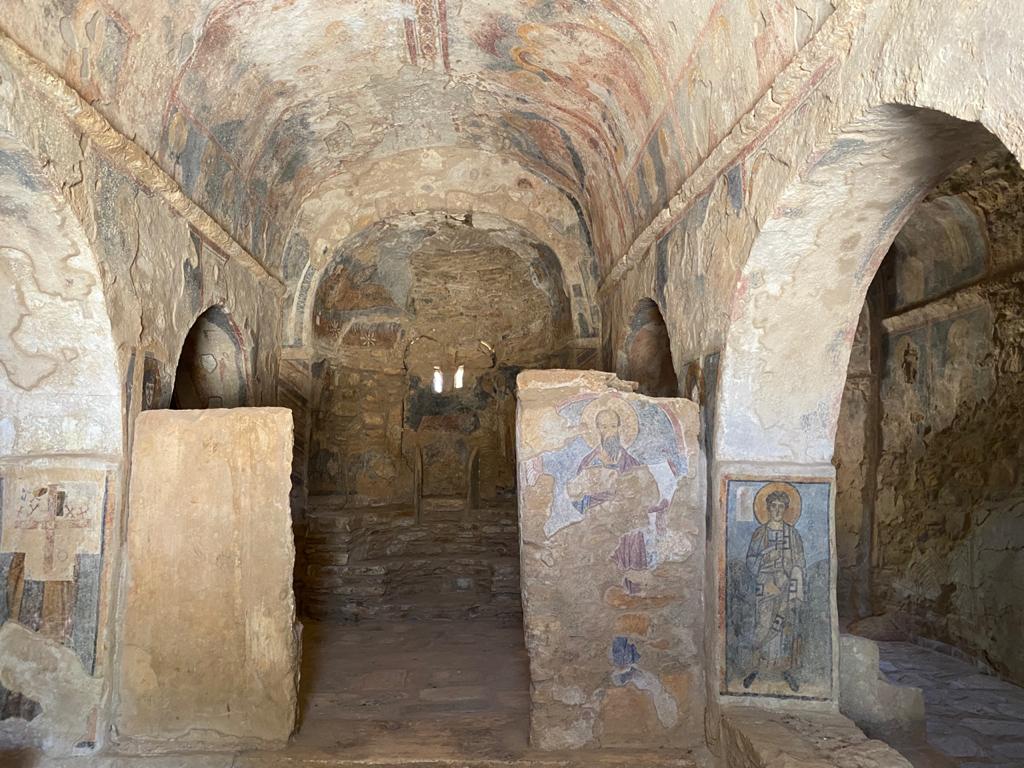 According to Lina Mendoni, "with the upgrade of the museum space of Apeiranthos, the Ministry of Culture and Sports endows Naxos with completely modernized museum infrastructures, which highlight the importance of its findings, its historical and cultural physiognomy, while in combination with the prominent archeological sites, such as the Sanctuaries of Yria and Sangri, the aqueduct of Melanes, but also the restored Byzantine churches scattered throughout the island, can have a decisive effect on the development of special forms of tourism, such as cultural and hiking with beneficial effects on the local economy and the creation of new jobs ". 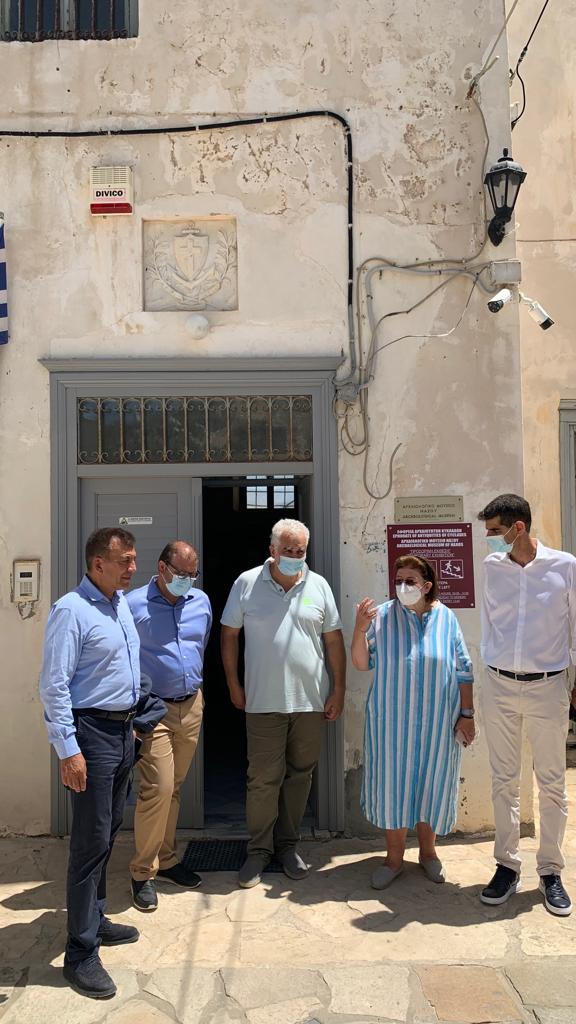 Lina Mendoni was accompanied throughout her tour in Naxos by the Cyclades MP and former Minister Giannis Vroutsis, the Mayor of Naxia Dimitris Lianos, the Deputy Regional Governor and Prefect of Naxos Giannis Margaritis, the Head of the Ephorate Ephoitas Arifos

Rejecting the appeal against the parliament that ruled that Dimitris Lignadis could not be imposed a new temporary detention order for the two cases ...
Read more
984

Adapted to the new regularity imposed by the conditions of the pandemic, the 6th Truce Road was held on Sunday with success and with several international participations, ...
Read more