More than 150 fires have been burning in Sicily since yesterday 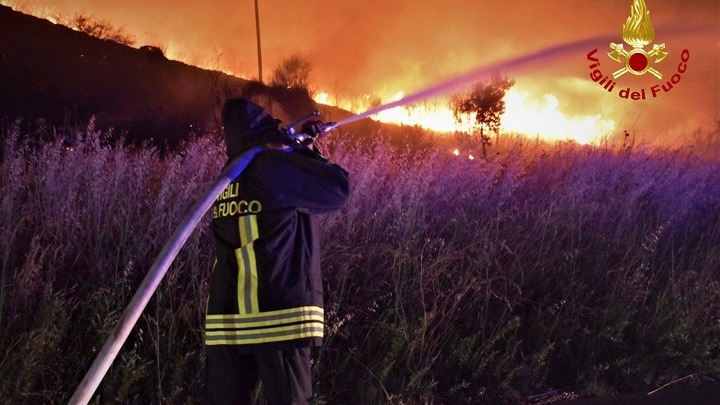 More than one hundred and sixty fires have been burning on the island of Sicily since yesterday afternoon. According to Italian public television Rai, much of it is the result of arson.

In the greater Catania area, firefighting operations have exceeded one hundred and seventy. However, there are fire fronts outside the cities of Enna, Noto, in the wider area of ​​the city of Messina and in Syracuse. "The damage is incalculable," Italian media reported. Sicilian Governor Nelo Mouzoumetsi went so far as to say that "the arsonists should henceforth be sentenced to life imprisonment."

In the city of Catania alone, sixteen fires have broken out in the last XNUMX hours and almost two hundred people have been forced to flee their homes.

The fire also destroyed well-known coastal facilities. This is not the first time this has happened and this indicates that there are likely to be conflicting, strong economic interests. In total, in Lower Italy (mainly Sicily and Puglia) since yesterday firefighters have carried out eight hundred operations to extinguish fires.

SYRIZA: The sudden decision to privatize PPC is a crime against the Greek people

In a statement, SYRIZA criticized the government for the privatization of PPC, calling it a "crime against the Greek people." Specifically, the announcement states: "The ...
Read more
GREECE

The strategic partnership between Greece and Israel, as well as the importance of the tripartite format of Greece-Israel-Cyprus cooperation, was at the center of the meeting ...
Read more
COVID-19

The European Union drug regulator announced today that in early October it will or will not give its approval for the granting of a ...
Read more
WORLD

The prosecutor's office identified at least 173 online sources, related to the opposition politician Alexei Navalny and the Anti-Corruption Foundation, which ...
Read more
CIVILIZATION

In his new work, Wakatt, which draws inspiration from the African continent, but also has many more influences, the choreographer Serge Aime Koulibaly ...
Read more
News Bulletin Athens 9.84

The Prime Minister Kyriakos Mitsotakis will not finally meet tomorrow morning with the Archbishop of America Elpidoforos, in the planned tour of Point Zero and ...
Read more
GREECE

The Minister of Infrastructure and Transport, Costas ... presented his positions on the draft of the new European Regulation for the Development of Alternative Fuels Infrastructure ...
Read more