Iakovidis: He announced his retirement from weightlifting 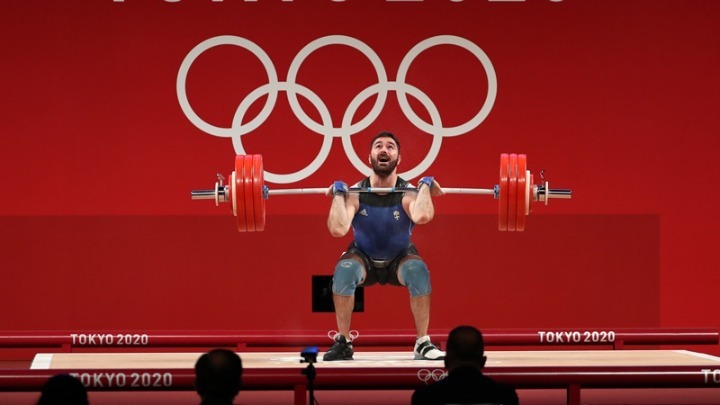 Theodoros Iakovidis completed his effort in the qualifier of the 96k category. (XNUMXnd group) of the Olympic Weightlifting tournament without being able to secure his qualification to the final.

The Greek champion "lifted" 338 kg in total (156 kg in snatch - 182 kg in zete) and with tears in his eyes after his effort, spoke about the problems he faced and announced that this was his last fight with the "blue and whites" »Colors.

"This performance does not reflect my efforts. Forgive me for the trembling of the voice. These are my last moments in the National team. I had some injury problems after the European Championship, between April-May and the beginning of June. I basically came with a month, heavy, regular workout. I left Athens with 150, 180 I did 156, 182 I tried and in 191. I can not have a complaint. I did more than what I did in the last days in training.

This was the tactic we had said to follow with my coach. To enter because we did not have much training on our feet to enter with three heavy efforts, to chase more things. We entered slowly, we started from low, then slowly climbed and in the end to enter an effort that will be beyond the possibilities we had and so we did it. In our snatch he came out, in the zete we were left with strength… "Iakovidis stressed in one of the most intense moments of a Greek athlete in the Games and added:

"I do not cry out of grief because I did not seem to be doing well. I cry because it's all over. Unfortunately I can not perform 100% and have my head calm to train and be able to perform what is appropriate to attribute to this flag I wear. Sorry if for some I put it on my feet, but I'm too tired and can no longer stand this situation. It is very sad to be ashamed to go to the physiotherapist because he does not take your money knowing your condition. And I can not stand it, I want to calm down and go back to my own and to hug them and thank them ".

US sanctions on Iran for human rights violations

Negotiations on Iran's nuclear program will resume on Thursday

Negotiations to bail out the Iran nuclear deal will resume on Thursday, following a pause earlier this week, as ...
Read more
WORLD

US President Joe Biden did not make "promises" nor did he make "concessions" to the demands of his Russian counterpart, who mainly wanted to close ...
Read more
News Bulletin Athens 9.84

Faced with imprisonment of up to two years and a fine, will be found the parents and guardians of students who do not take care of their studies in ...
Read more
SPORT CITY

Vierinia: "Anyone who can not stand the pressure, let go"

Andelino Vierinia was hosted on an online show by PAOK fans. Among other things, he mentioned that anyone who can not withstand the pressure, can leave ...
Read more
WORLD

The High Representative for Refugees, Filippo Grady, stated today before the UN Security Council that he fears an increase in the number of displaced ...
Read more
COVID-19

The number of coronavirus cases recorded in the last 15.756 hours in Italy amounts to 24, while 99 people lost their lives. In total, 695.136 diagnostic tests were performed, ...
Read more