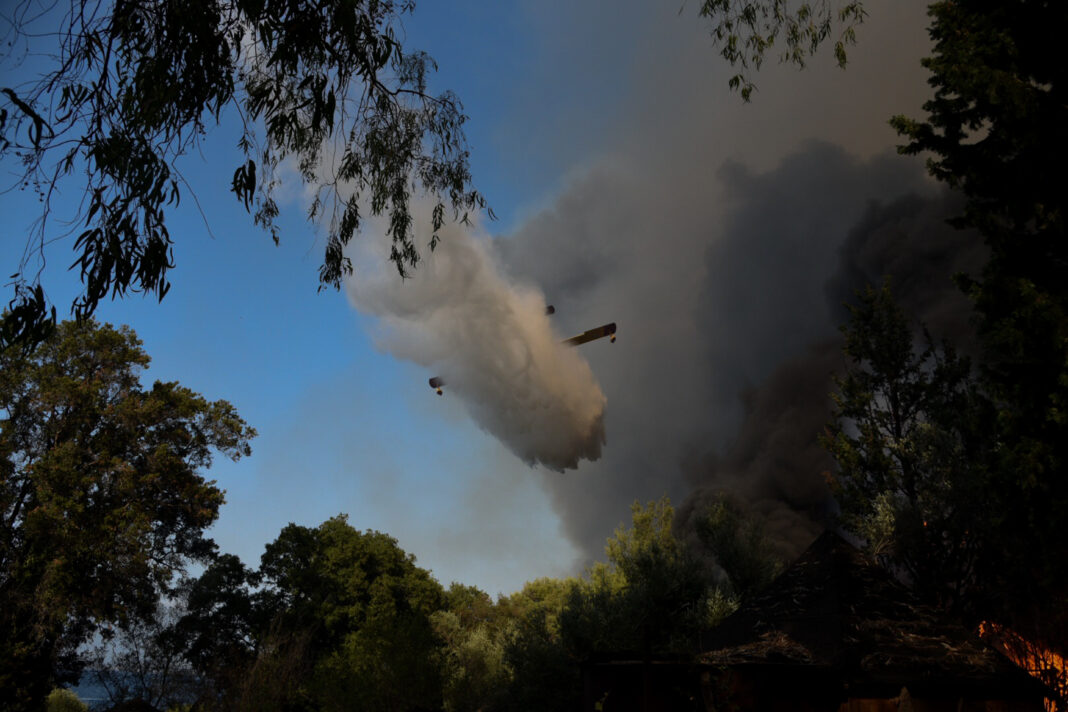 The fire that broke out shortly before 2 in the afternoon in the area of ​​Ziria, in the Municipality of Egialia in Achaia, is raging.

As a result of the fire, which quickly spread, houses were burned, settlements and camps were evacuated, while hospitals, EKAB and the port were on standby.

As many as five people were injured in the fire in Aegialia, as the commander of the 6th health district, Giannis Karvelis, told the Athenian-Macedonian News Agency.

According to Mr. Karvelis, the injured "were taken to the hospital of Aigio by three citizens and a port officer, who had respiratory problems, but their health condition does not inspire concern". Also, a citizen with burns on his hand, who was operating in the fire in Ziria, was initially admitted to the University Hospital of Patras, in order to protect his home ".

However, as he added, "the citizen was then transferred to the plastic surgery clinic of the 'Agios Andreas' hospital, where he is being treated". 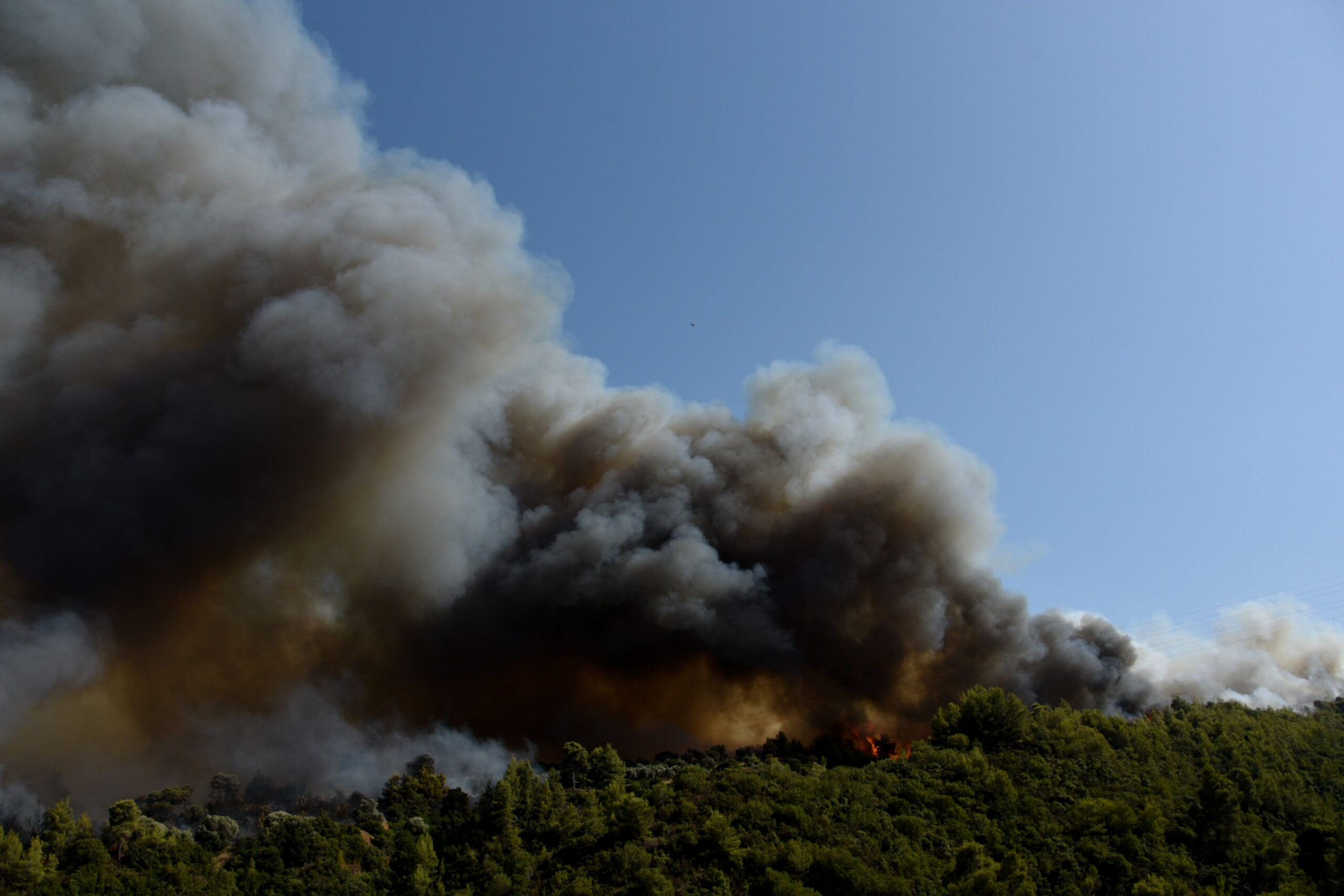 "At least 10 houses have burned in our area", says the president of the community of Ziria, where the settlement of Lambiri, Vassilis Glossidis, belongs to APE - MPE, adding that "the damages are great, as many crops with olive trees have been burned" . However, as he points out, "we can not yet have a complete picture of the magnitude of the disaster, since the fire is ongoing."

He also states that "there is an interruption in the electricity supply, but the pumping stations are in operation", adding that "I am very upset, because a beautiful village burned down, while the settlement of Lampiri, which was hit by the fire, is a wonderful place". "We experienced an unprecedented situation, as the fire was burning with a special grief", says the president of the community of Kamares, Panagiotis Perlegkas, to APE - MPE, about what the residents experienced, seeing the fiery front approaching their houses. 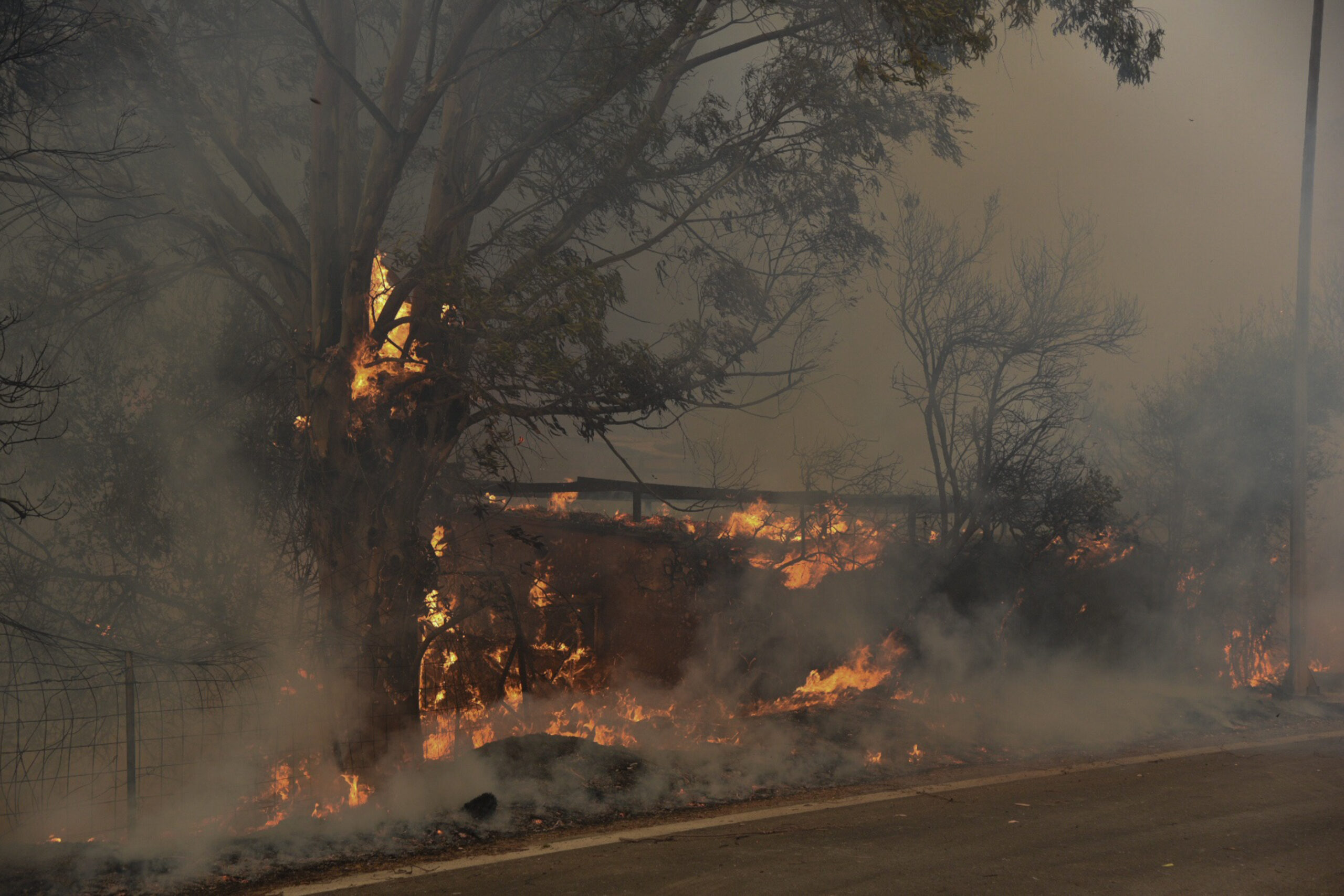 "Fortunately, everyone showed composure and obeyed the orders to leave their homes and gather at the municipal football stadium", continues Panagiotis Perlegkas, adding that "there were always boats of the port in the sea zone, to provide help to anyone in need".

Also, Panagiotis Perlegkas points out that "the situation is very difficult", adding that "the fire has burned cables from the power poles, with the result that there is no electricity and water supply in the tanks". 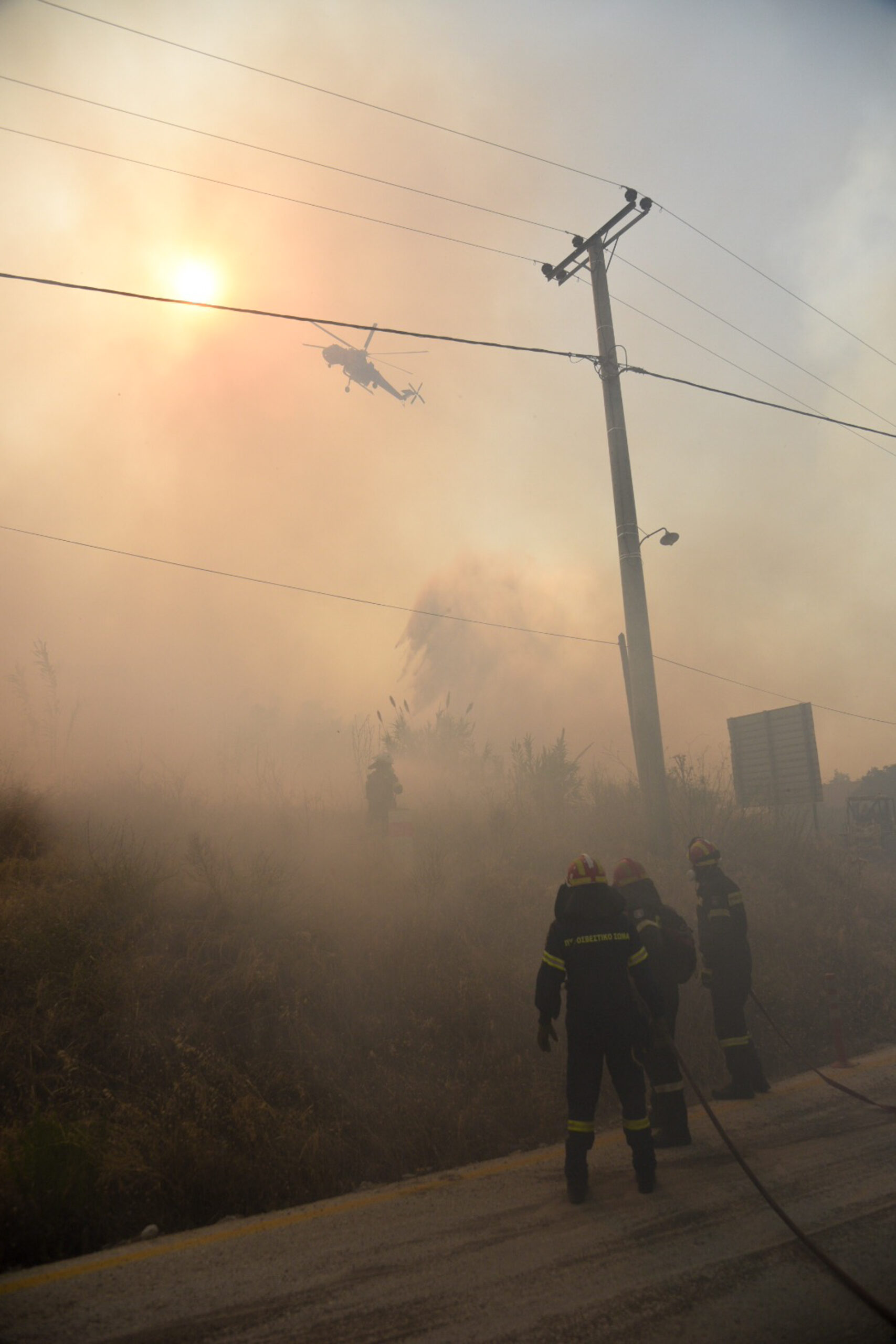 The Deputy Minister of Civil Protection and Crisis Management, Nikos Hardalias, went to the spot shortly before 19:00.

So far, 112 has been activated twice to warn those citizens in the wider area to evacuate their settlements.

Specifically, at 14:35 the citizens who were in the settlements of Ziria, Kamares, Lampiri, Achaia were notified through 112 to evacuate while at 17:45 another message was sent to those in the wider area of ​​Longos, Achaia to evacuate immediately to Aigio.

🆘 If you are in the settlements # Ζηρια, # Arches & #Lamp Achaia, evacuate immediately to # Αίγιο. 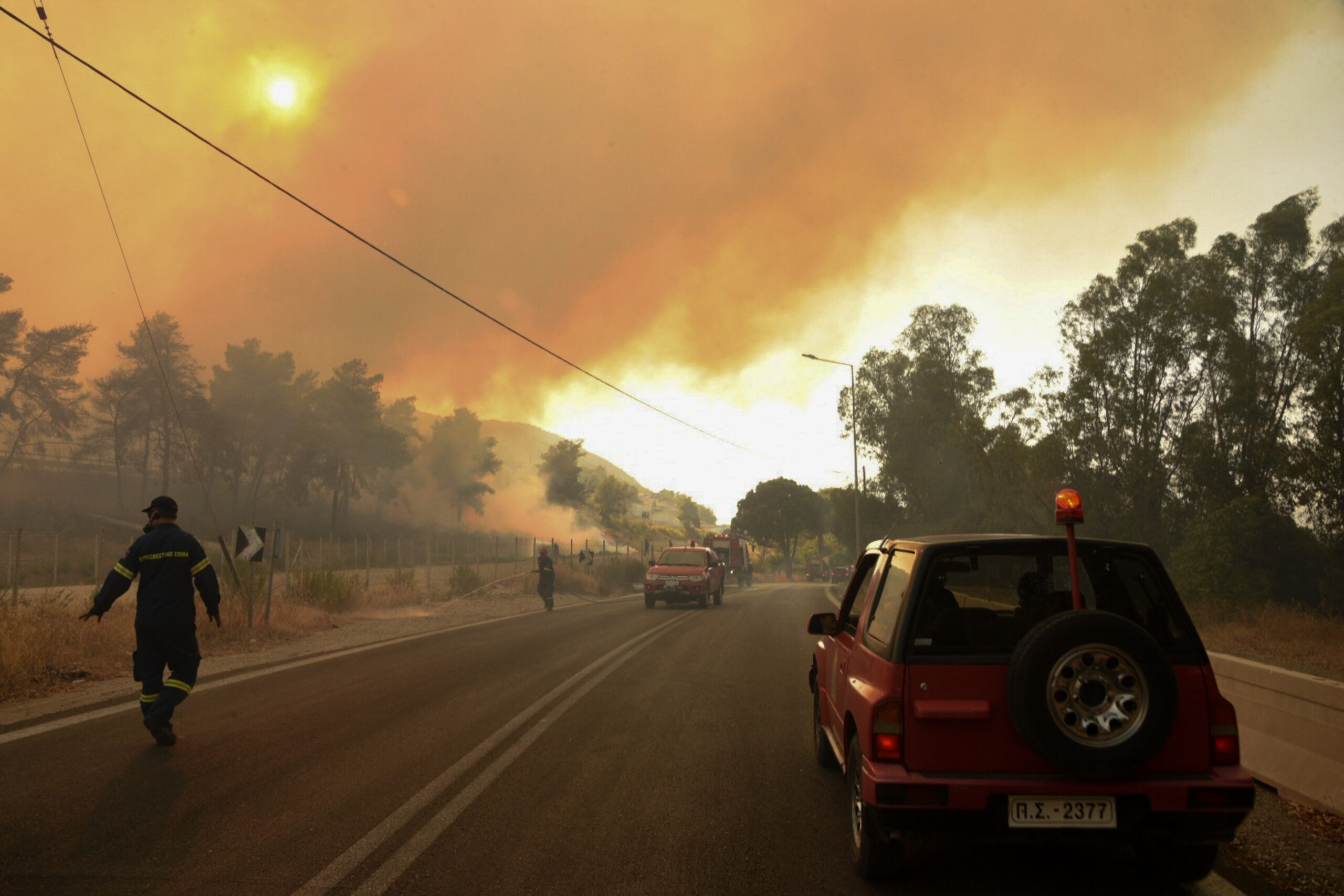 Regarding the traffic on Olympia Odos, in the Corinth - Patras Department, the forces of the Fire Brigade are making every effort to extinguish the fire near the Panagopoulas tunnel, in order to reopen the upper part of the road network.

At the moment (21:00) the traffic has been stopped in the specific section of Olympia Odos, as the fire is in progress and there is a danger for the passing drivers.

Drivers will be constantly informed of developments on the fire front so that they can cross safely.

For security reasons, the Rio bridge, the new and the old national road, Patras - Corinth were closed early in the afternoon.

Traffic has been stopped:

Therefore, according to the Police, those drivers who move in the direction of Athens, should use the national road Nafpaktos - Itea. 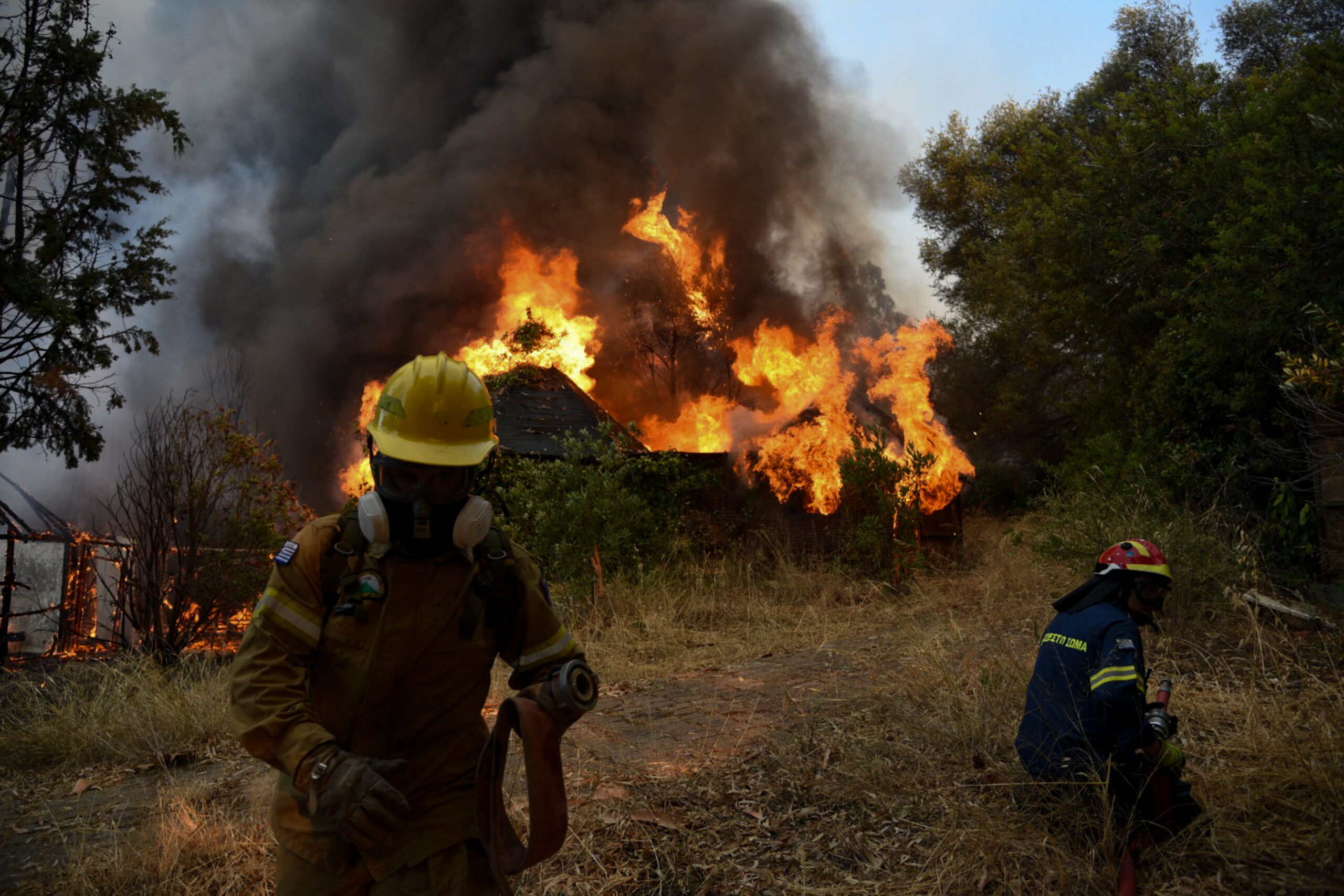 The University Hospital of Patras and the Hospital of Aigio have been put on standby, as well as EKAB.

In addition, by order of the President of EKAB, the Special Department of Disaster Medicine of EKAB (ETIK-EKAB) has been put on alert (red-alert) to intervene whenever necessary, while the 6th Health District and the Governors of Health Facilities of the Prefecture of Achaia are in constant contact with the Unified Business Center of EKAB (ESKE-EKAB) for the continuous flow of information regarding the recording of the operational health status of the Health Structures of the wider area of ​​the prefecture of Achaia.

So far, EKAB rescuers and doctors have intervened in six cases.

Finally, the crew of the ambulance located in the port of Aegio carried out a preventive examination of 38 people who disembarked from the boats of the Coast Guard, after being transported from adjacent coastal points.

Children were safely removed from the camp

For precautionary reasons, about 110 children who were hosted in a camp in the coastal area of ​​Panagopoula were safely removed due to the fire in Ziria. At the same time, the Police is carrying out continuous operations for the safe removal of car drivers, who have been immobilized in the coastal areas of Lambiri and Kamares.

Meanwhile, boats of the Greek Navy are on standby, patrolling in the sea area between Lampiri and Kamares, in order, if necessary, to assist in the evacuation of citizens, while for the same reason, private boats are on standby.

Transportation of citizens from Kamares and Longo

DAEE team in Egialia to investigate the causes

Meanwhile, a team from the Directorate for Combating Arson Crimes (DAEE) is going, by order of the Chief of the Fire Brigade, Lieutenant General Stefanos Kolokouris, to Egialia, Achaia, in order to investigate the causes of the fire that broke out today in the area of ​​Z.

Two fiery fronts in progress in Nea Makri, Attica. One outbreak occurred near the holy monastery of St. Ephraim while the second ...
Read more
SPORT CITY

The 5 largest sports clubs in the country with a joint letter to Avgenakis request an advance payment for the money from the bet. According to the specific letter ...
Read more
IT HAPPENS IN ATHENS

Today's meeting of the Prime Minister Kyriakos Mitsotakis with the Mayor of Istanbul Ekrem Imamoglou is important, who accepted the invitation of the Mayor of Athens Costas ...
Read more