K. Mitsotakis: The country will not close again 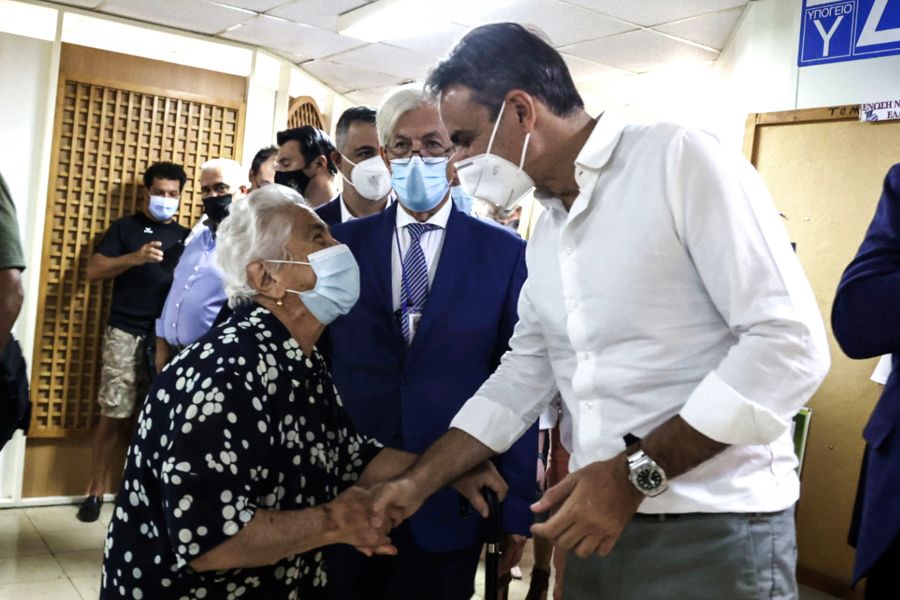 The University General Hospital of Heraklion, Crete (PAGNI) visited at noon on Friday the Prime Minister Kyriakos Mitsotakis where he talked to doctors, nurses and administrators about their fight to tackle the pandemic.

"We are all together in this battle. There is no room for false divisions or party blinders. "We are making an effort together to overcome this unprecedented crisis and we will all win together or we will all lose," the Prime Minister stressed.

Kyriakos Mitsotakis was guided to the premises of PAGNI, talked to patients, was informed in the lobby of the new ICU about its operation and then had a meeting with staff of the hospital and the wider Health District of Crete in the central amphitheater of No.

In Crete, the measure of vaccinations with mobile units was implemented, with very positive results, giving "the impetus to extend them with even greater intensity to the rest of Greece," said the Prime Minister and added the following:

"In consultation with the Ministry we can start here from Crete to send mobile units to large hotels. If there is interest that the units can go, to vaccinate workers en masse in large places of hospitality, so that the workers escape the hassle and hassle to go on their own - it may not match the pace of their work. Let's try this in order to convince the employees in tourism that they have to take this step ".

"We will manage here in Crete, to control this fourth wave", underlined Kyriakos Mitsotakis, noting that important stabilization trends are being recorded. Speaking more broadly about the evolution of the pandemic in the country, he stated that "today we will exceed 110.000 tests" and that Greece is one of the countries that do the most tests in Europe, which, as he mentioned, "are extremely important".

"And I can tell you for sure that the country will not close again. "The economy and society will continue to work, we will have to comply with the minimum protection measures and we will be strict in the few that we ask for," the Prime Minister pointed out.

"As we are coming out of the pandemic, the NSS has inherited virtually twice the number of intensive care units than it had before," added Kyriakos Mitsotakis, stressing that today the vast majority of patients who are intubated or unfortunately die "are our unvaccinated fellow citizens ".

Kyriakos Mitsotakis also referred to the content of the statements for the rationalization of the health map. "When we talk about a streamlined health map of the country, this is exactly what we mean: who does what and where. "If we need hospitals that do the same things at a very close distance, or if we need to make a difference, look at issues like where we put the day care, where we put the artificial kidney, for example," he said.

In PAGNI, as well as in the Venizelio Hospital of Heraklion and in the Hospital of Chania, additional ICU beds were created through the Donation of the "Stavros Niarchos" Foundation. Also, the University General Hospital of Heraklion is the first hospital in which the new costing system of hospital services was fully implemented, while the donation from the PET-CT Imaging Foundation aims to further upgrade the health services for oncology patients.

During the meeting, the Director of the Medical Service of the Hospital, Professor Nikolaos Tzanakis, referred, among other things, to the methodology and the way of operation of the scientific team he leads, thanking for the support that this team enjoys.

The Commander of the hospital, Georgios Chalkiadakis, referred, among other things, to the significant achievement of the increase of the ICU of the hospital and to the forthcoming installation of PET-CT for oncology patients, which was announced a few days ago.

Then, the Governor of the 7th Health District of Crete, Eleni Bourboudaki, focused on strengthening the hospitals with new permanent and auxiliary staff but also on the operation of mobile vaccination units that started in Crete.

For his part, the Regional Governor of Crete Stavros Arnaoutakis noted the strengthening of Crete by hiring doctors and nurses and the supply of new ambulances of EKAB that is already progressing. Addressing the Prime Minister, he asked for the continuation of the central support through the Recovery Fund, so that Crete has an increasingly modern public health in the next decade, at the level of Europe, given the large number of tourists it attracts from all over people.

The meeting, together with the health executives of the wider region of Crete, was attended by, among others, the General Secretary of Health Services, Giannis Kotsiopoulos, the General Secretary of Primary Health Care, Marios Themistokleous, the President of EKAB, Nikos Papa. Eleni Borboudaki, the Commander of PAGNI Georgios Chalkiadakis, the Commander of the Venizelio Hospital of Heraklion Konstantinos Terzakis and the Rector of the University of Crete George Kontakis.