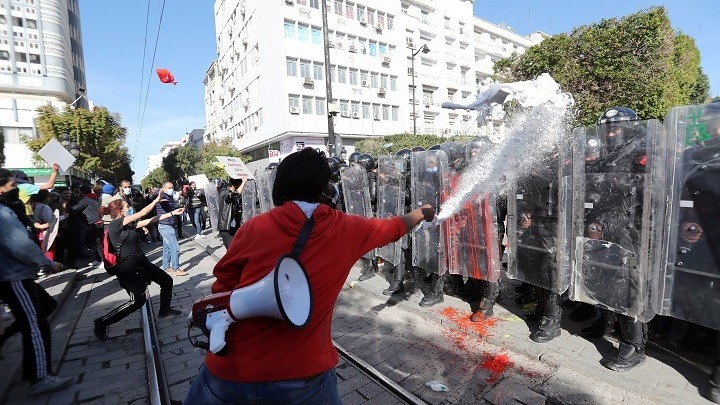 Tunisian President Kais Sagent decided last Sunday night to suspend parliament for 30 days and take over the executive branch himself, following a day marked by mass mobilizations in the country against mainly the core component of the government. of the Islamic party Renaissance Movement, or Ennahda, which in turn denounced a "coup" by the head of state.

Rapid developments shock the young Tunisian republic, whose operation has been based since 2014 on a constitution that was the product of a compromise, with a mixed parliamentary system under which the president theoretically retained only a few privileges in the fields of diplomacy and national security. .

Many Tunisians, outraged by the endless power struggles and the controversial management by the government of the social and health crisis caused by the new coronavirus pandemic, took to the streets despite the night curfew, firing their cars and firing at them. with enthusiasm in Tunis and several other cities.

"This is the president we love," said Nakhla, a XNUMX-year-old who waved the Tunisian flag amid a large crowd in Tunis; on the other hand, another citizen, not far from her, expressed fear that the country was seeing the "birth of a new dictator."

"Under the Constitution, I took decisions that made the situation necessary in order to save Tunisia, the Tunisian state and the Tunisian people," Sagent said after a meeting at the Carthage Palace with security officials.

"We are going through the most delicate moments in the history of Tunisia," added the head of state, who has been embroiled in a brawl for months with Ennahda, the largest party in parliament.

"This is neither a suspension of the force of the Constitution nor a deviation from the constitutional legitimacy, we are working within the framework of the law", clarifying that its decisions will be made public in the form of a decree.

In an announcement posted on its Facebook account, the presidency said the suspension of the Tunisian parliament would last 30 days.

For its part, Enachda denounced a "coup against the revolution and the Constitution," in a statement posted on the same social networking site. The Islamist faction called on its "supporters" as well as "the Tunisian people" in general to "defend the revolution".

The revolution of 2011, the first of the so-called Arab Spring, had led to the ousting of ousted Zine el Abidine Ben Ali, putting Tunisia on the path to democratization, which it continued to pursue despite many challenges, both social and security.

However, after the emergence in 2019 of a parliament with fragmented power and a passionately undecided president, who was elected due to dissatisfaction with the political order that has been in power since 2011, the country plunged into an extremely unresolved political crisis.

Mr Sagent, who has campaigned for a new revolution under the law and for radical changes to the new regime, has announced that he will remove Prime Minister Hisham Masisi from office.

The president "will exercise executive power with the help of a government whose head will be appointed by the head of state," he added.

"The constitution does not allow the dissolution of parliament, but it does allow the suspension of its activities," Sagent said, referring to Article 80 of the constitution, which provides for such a measure in the event of "imminent danger" to the country.

The president also announced the lifting of the immunity of the deputies and promised that those involved in criminal cases would be prosecuted.

The services of Prime Minister Masisi had not reacted until late on Sunday night to the president's decisions. Ennahda members said they did not know the whereabouts of the head of government after his meeting with Mr. Sagent yesterday afternoon.

Thousands of protesters mainly demanded the "dissolution of parliament".

The president himself took to the streets to meet with protesters, amid cheers, on the same streets as the 2011 demonstrations.

Army vehicles surrounded the parliament and Rashid Ghannouchi, the speaker of parliament, accompanied by members of his party, was prevented from entering the building by army men.

"The army must protect the country and religion," Mr Ganoussi said, calling for parliament to open. "We are soldiers, we obey orders. "We have been ordered to close parliament," the military said in a statement. "Soldiers, officers, we ask you to side with the people," Mr Ganoussi insisted. In vain.

Shortly afterwards, speaking to reporters, he stressed that he opposes the concentration of "all power in the hands of one man".

Tunisian anger has been fueled by clashes between parties and bradders between parliament speaker Rashid Ghannouchi - Ennahda leader - and President Sajed, which has paralyzed the state apparatus.

Many also accuse the government of being completely unprepared and showing a complete lack of coordination in the face of the health crisis; Tunisia is now facing huge shortages, especially of oxygen. With 18.600 deaths from COVID-19 out of a total of almost 570.000 SARS-CoV-2 cases, the Arab country of 12 million has one of the worst official mortality rates in the world.

Protesters chanted slogans against Ennahda and Prime Minister Masisi yesterday and said "the people want the parliament to be dissolved". "Change of regime", wrote placards.

Demonstrations were called through Facebook on July 25, the day the establishment of democracy is celebrated, by unknown organizations. They included, among other things, demands for the revision of the Constitution and a transitional government with a greater role for the army and the retention of President Sagent in office.

The multidimensional crisis is described as the most serious test for Tunisia since the 2011 uprising, which brought neither a stable democratic government nor a reduction in inequalities. The rise in inflation, the economic and fiscal slump - Mr Masisi was negotiating a new loan from the International Monetary Fund to refinance public debt - and reform disputes have already brought the government to the brink of collapse.

The European Union today presented a series of recommendations in order to improve the protection of journalists during demonstrations, mainly online, worrying about ...
Read more
SPORT CITY

"Oxygen breath" for Barcelona from Goldman Sachs, which gave the Catalan club a three-year period to repay the loan of 595 million ...
Read more
CIVILIZATION

The inauguration of the Year of Culture and Tourism of Greece-China took place with a simple event in the Ancient Agora, just before sunset. The ceremony started ...
Read more
WORLD

Blinken: France is a vital ally in the Indo-Pacific region

France is a "vital ally" of the United States in the Indo-Pacific region, assured the head of the American diplomacy Anthony Blinken tonight, a day after ...
Read more
News Bulletin Athens 9.84

The Deputy Minister of Health, Mina Gaga, expressed their concern about the stagnation of the vaccination program in the age group over 55 ...
Read more
SPORT CITY

Without catching a great performance and showing the right reaction after the shock of the premiere against PAS Giannina, PAOK prevailed 2-0 ...
Read more
GREECE

Greece is first in the preferences of Russian tourists for autumn

Greece, Turkey, Cyprus and Croatia, are the most popular destinations abroad for Russian tourists, during the "velvet tourist season", as it is called in Russia ...
Read more