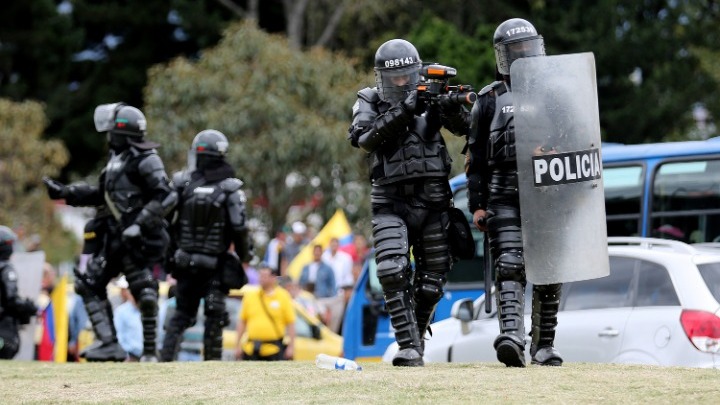 The Colombian government on Wednesday submitted to parliament a draft law on police reform, which has been strongly criticized, both domestically and internationally, for the barbaric crackdown on mass mobilizations since late April.

The text, however, does not provide for the police to cease to belong to the Ministry of Defense.

"The national police must remain part of the Ministry of Defense, because of the special circumstances, the threats and the violence that Colombia continues to face," Defense Minister Diego Molano told AFP.

The reform provides in particular better police training and sanctions against those who do not "fully" provide information during arrests or prevent journalists from videotaping their actions.

The government has been confronted since late April with wave of social controversy. The participants in the mass demonstrations demand more social justice and a more solidary state in the face of economic and social decline due to the pandemic of the new coronavirus.

After the successive incidents of police barbarity in the repression of demonstrations - they are killed more than 60 people - they also claim to have a reform of the police, especially to cease to belong to the Ministry of Defense.

In early July, the Inter-American Commission on Human Rights (ECHR) had stigmatized the "disproportionate" and "lethal" response of security forces to the protests.

Among his recommendations to the government was for the police to become a political institution, citing the "obsession with the logic of armed conflict in response to social mobilization."

The government of the right under President Ivan Duque, in power since 2018, has faced several waves of controversy. The most recent, from the end of April, triggered the plan to increase VAT and expand the tax base, which was very quickly withdrawn.

The mobilization, however, then turned into a protest against government policy.

Thousands of Colombians took to the streets again yesterday, Tuesday, after a month of suspension.

A total of 70 people were arrested in police raids in Bogota, Medellin and Cali.

Police "arrested 70 people, 69 of them on the spot, for offenses committed (…) on July 20, and another under arrest warrant for murder," police said in a press release.

In addition, 50 people, 24 civilians and 26 police officers, were injured in the incidents, according to the ombudsman's office, an independent public authority responsible for protecting human rights.

"I believe that Greece is much stronger today than it was in the last decade", stressed the Prime Minister, Kyriakos Mitsotakis, in a greeting addressed to ...
Read more
ECONOMY

New funding of 35,9 million euros in Greece from the EU Solidarity Fund

Resources of the EU Solidarity Fund amounting to a total of 35,9 million euros, were approved by the European Commission for Greece, contributing to ...
Read more
SPORT CITY

PAOK's agreement with Nova was announced

The cooperation with PAOK for the acquisition of its television rights in the current Super League championship was officially sealed by NOVA. As known,...
Read more
GREECE

The Minister of Health Thanos Plevris received today at the Ministry the coach-basketball player, Dimitris Papanikolaou. The veteran basketball player informed about the campaign that is starting regarding ...
Read more
SPORT CITY

The draw of the championship in the Third National was postponed

The final postponement of the draw for the championship of GDEthniki, scheduled for Monday (27/9), was made by the EPO. The reason that led to this development, ...
Read more
CIVILIZATION

The musical-theatrical play "Once upon a time on the Bosphorus" by Akis Dimos, which enchanted and moved the audience, returns for another performance on Wednesday, September 29 ...
Read more
ECONOMY

Until October 3, the ERGANI system will be available for Culture companies

From today until October 3, the ERGANI system will be available for the companies of theaters, music stages, dance theaters, concert halls and ...
Read more

The cultural week starts today, Friday, September 24, with a tribute from the Attica Region to the great Mikis Theodorakis with the "Mikis Theodorakis" Orchestra on ...
Read more
IT HAPPENS IN ATHENS

Registrations open at the 11 Creative Learning Centers of OPANDA

Theater, painting, music, traditional dances, jewelry making, ceramics, and much more are waiting for you in the creative learning programs of the Organization of Culture, Sports and Youth of ...
Read more