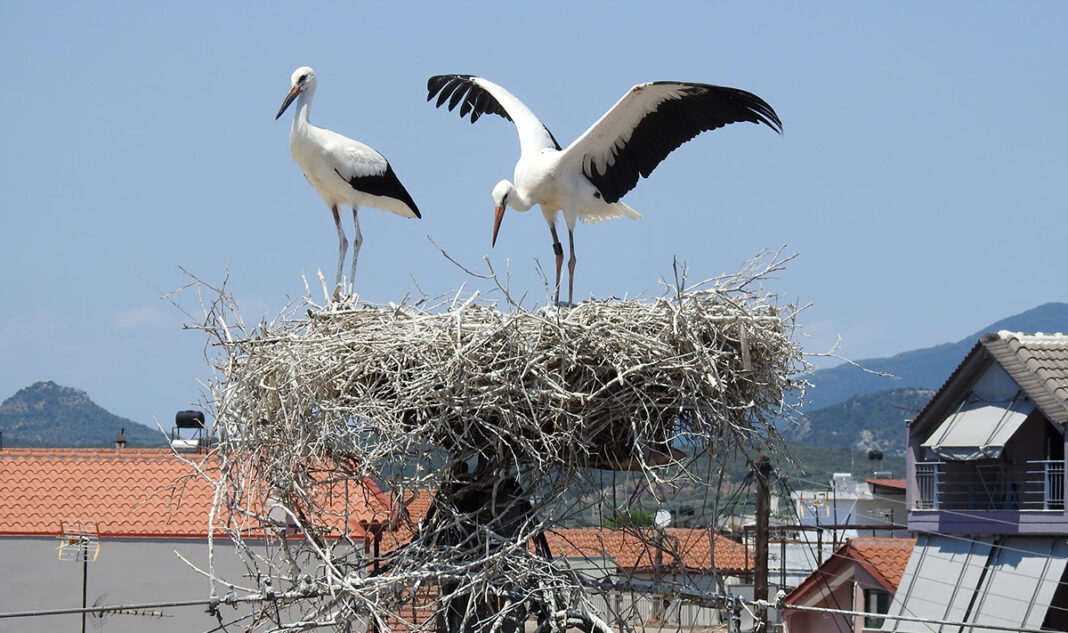 A few days ago, four young White Storks were marked with a satellite transmitter in three villages west of the Messolonghi lagoon (two in Lesini, one in the Occupation and one in Neochori).

The action was implemented with its scientific support Hellenic ORNITHOLOGICAL SOCIETY in co-operation with Messolonghi - Akarnanian Mountains Lagoon Management Body and the participation of volunteers and external collaborators.

The installation of satellite transmitters in White Storks takes place for the first time in the area. According to experts, the transmitters will provide valuable and hitherto unknown to scientists information about the movements of birds after leaving their nests, the threats they face, as well as the routes they will follow during their migration, which is expected to begin. late summer. Few storks have been observed to remain in our country all year round, while most overwinter in sub-Saharan Africa, reaching as far as South Africa. 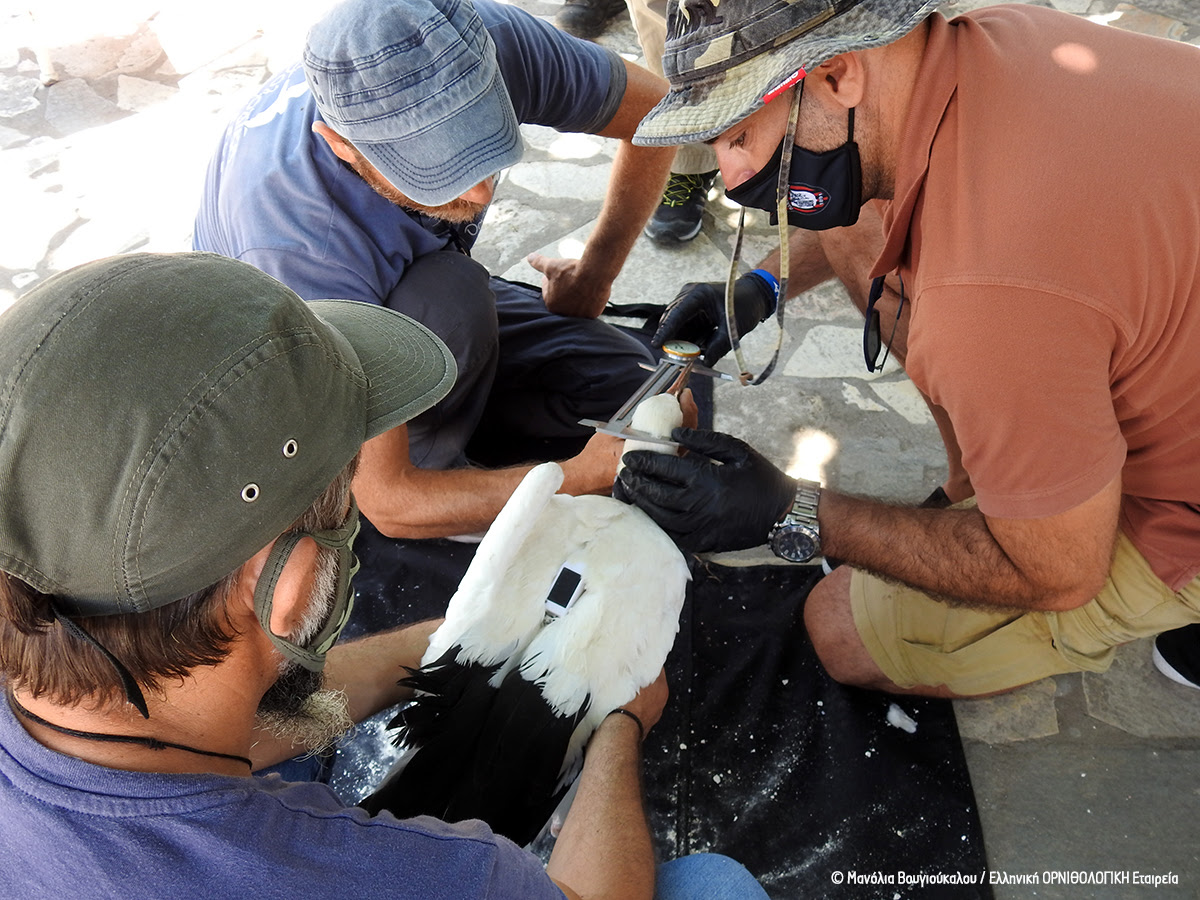 The inhabitants of the three villages, having already given names to the young birds, they watched with great interest the placement of the satellite transmitters in "Nikolina", "Aurora", "Panagiotis" and "Gyroportis". The latter especially, according to the first telemetry data we have received from its transmitter, seems to have already flown from its nest and is looking for food in nearby fields. During the operation, a blood sample was taken from the birds, the analysis of which will reveal their exact sex.

The four young storks were fitted with special, black and octagonal rings three weeks earlier, from thethe Management Body of the Messolonghi - Akarnanian Mountains Lagoon. Ringing is the longest-lived scientific method of tracking bird movements. If some birds are caught or observed in another area, the unique combination of each ring allows researchers to calculate their migration routes and movements, as well as the lifespan of the birds. 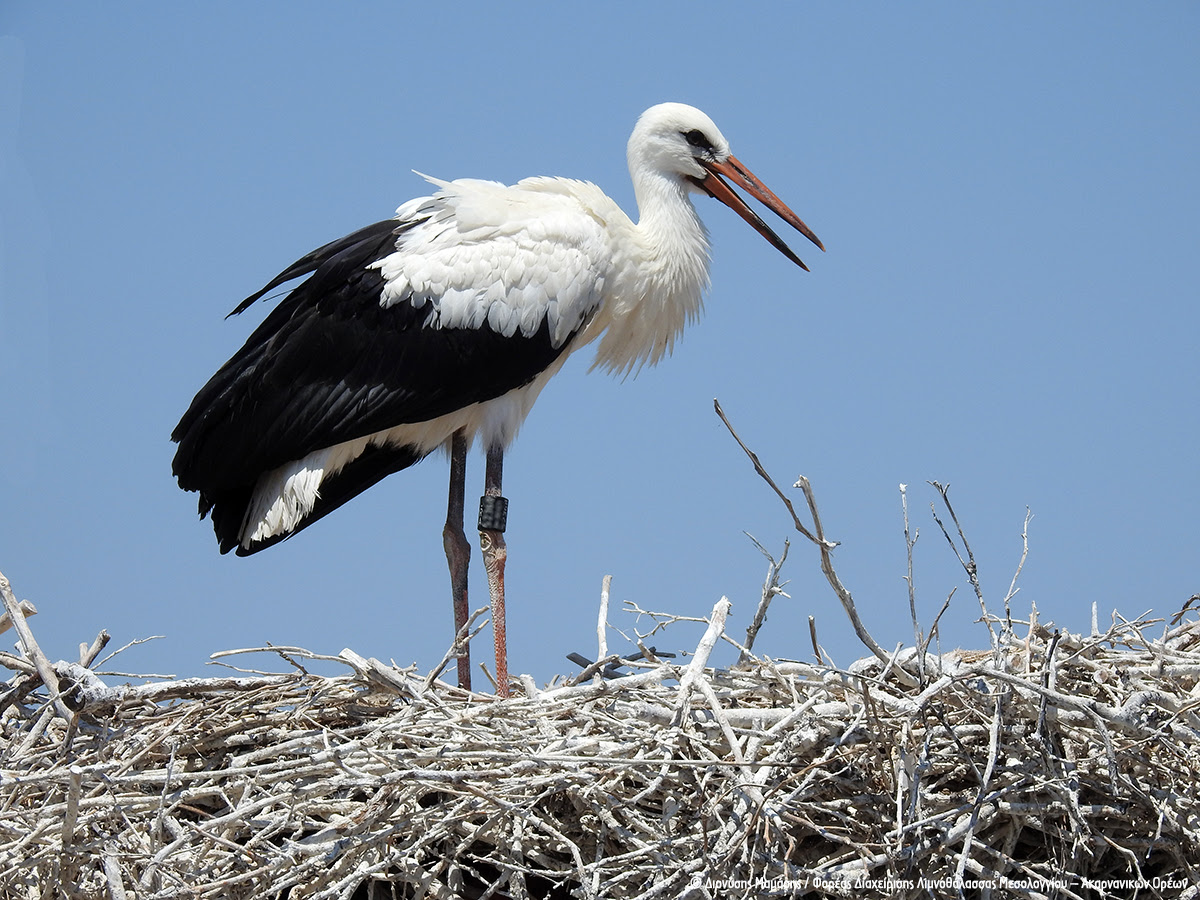 The White Stork (Ciconia ciconia) is a long-distance migratory species. For our country, the White Stork is an endangered species (Vulnerable Risk Category). Its Greek population is estimated at 2.000 pairs, 15 of which are located in the protected areas of the Messolonghi - Aetolian Lagoon National Park. According to residents, the birds nest in the area above 35 chronia.

The local community is a helper

Environmentalists warmly thank him DEDDIE Messolonghi and its sub-agency HEDNO Astakou for the assistance they provided in the implementation of the action, the Municipality of the Holy City of Messolonghi for the concession of the special basket vehicle, as well as the Fire Service Messolonghi for its contribution. They also warmly thank the villagers for their positive attitude and patience during the short power outages.

Finally, the organizations thank you the sensitized residents of Neochori, who alerted a juvenile White Stork who had fallen from the nest during his first attempts to fly. After ringing and marking it with a satellite transmitter, the stork was repositioned in its nest and has already managed to make its first flight successfully!

Northern Greece is on alert, with coronavirus cases on the rise, raising alarm in both the government and the scientific staff. In Thessaloniki...
Read more
News Bulletin Athens 9.84

The Israeli Ministry of Health announced yesterday Tuesday that in the previous 24 hours 8.691 cases of SARS-CoV-2 were diagnosed and 26 patients succumbed to ...
Read more

Online pre-sale offer 8 € through viva.gr The offer is valid until September 27. More than 30 comedians are the core of the MIC DROP Comedy Club, ...
Read more