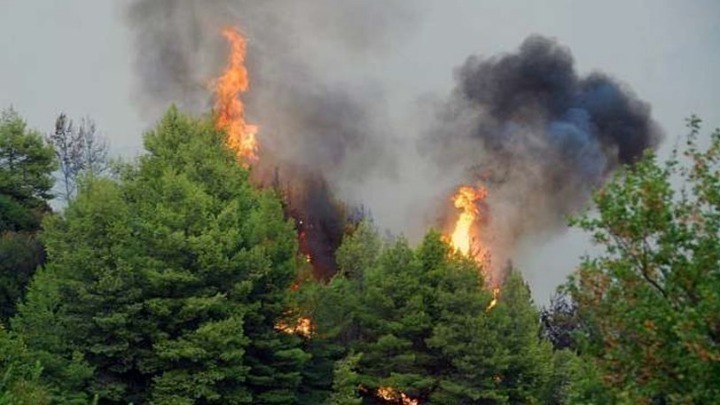 The fire fronts around the villages of Kapandriti and Agia Irini in Kefalonia are in full swing, with the fire brigade fighting to keep the flames away from the houses of the villages.

The forces are constantly increasing as darkness falls and they will not be able to operate by air. Specifically, 25 firefighters from 1st EMAK are currently going by Civil Protection aircraft, while another 16, with eight vehicles, are going by boat from Kyllini. In total, 106 firefighters will operate with six groups of pedestrians, 27 vehicles and from the air seven aircraft and two helicopters.

The forces in Kefalonia are reinforced with 25 firefighters from the 1st EMAK, who go with the A / F ATR of GGPP and with 16 firefighters and 8 vehicles that go by boat from Kyllini. A total of 106 will attempt # firefighters with 6 ohms. pedestrians, 27 vehicles, 7 A / F and 2 A / P.

By order of the Chief of PS. Lieutenant General Stefanos Kolokouris, a member of the DAEE goes to Kefalonia to investigate the causes of the fire that broke out today.

The Regional Director of the Ionian Islands, Mrs. Rodi Kratsa, spoke to APE - MPE, who, together with her staff, closely monitors and has constant contact with the Deputy Regional Governor of Kefalonia, about the development of the fire.

"The fire is very big, a coordinated effort is being made by the fire service to demarcate it. There are large fire brigades at the scene and they will be reinforced further. "Two settlements, Agia Irini and Kapandriti, have been evacuated as a precaution," said Ms. Kratsa, adding: "The Ionian Islands Region, together with the municipality, are assisting them as requested in this great battle with the flames."

"We are committed to supporting energy consumers in Greece through state aid, but also through encouragement to electricity providers ...
Read more