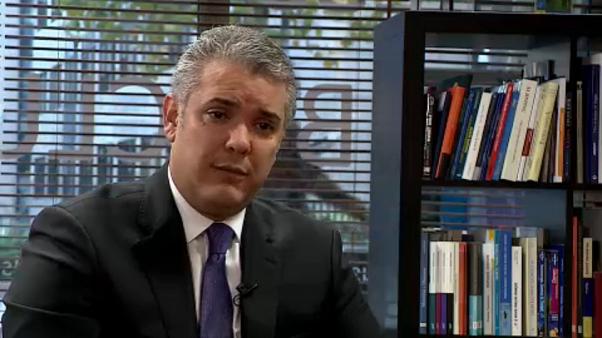 The Colombian government announced on Saturday that it was offering a large fee for any information leading to the arrest of the perpetrators of the previous attack on the helicopter of President Ivan Duque, near the border with Venezuela.

"A reward of up to 3 million pesos (approximately 666.000 euros) is offered to the person (…) who will allow us to find those responsible for this terrorist act," said Defense Minister Diego Molano, as recorded in a video distributed his services from Kukuta, in the northern part of the Andean country.

The police chief, Jorge Vargas, said the helicopter came under fire from a neighborhood not far from the airport shortly after takeoff.

Police developed and searched "this area", where "two weapons were found": an AK-47 semi-automatic rifle, the serial number of which is under investigation, and a 7,52 caliber rifle "bearing the insignia of the Venezuelan army", he said.

Mr Duque was on board the helicopter with his government's defense and interior ministers, Molano and Daniel Palacios, as well as Silvano Serrano, governor of Norte de Santander, which borders Venezuela. Photographs released by the Colombian presidency show bullet marks in the tail and near the propeller.

None of the passengers were injured. The attack was condemned by the UN, the US, the EU and several Latin American governments.

"We are not intimidated by violence or terrorism. "Our state is strong, Colombia is strong enough to face this kind of threat," the head of state assured on the day of the attack. "The government will not lose a single minute in the fight against drug trafficking, terrorism and organized crime," he insisted.

There was no responsibility for the action.

In this area, where there is great insecurity, the organization that is officially the last to continue the armed struggle in Colombia, the National Liberation Army (ELN), the Pelusos - a remnant group of Maoist guerrillas that has officially disbanded and abandoned the armed struggle. -, dissidents of the former Revolutionary Armed Forces of Colombia (FARC), as well as various drug-trafficking gangs.

A car bomb had exploded at an army base in Kukuta last week, wounding dozens of US military personnel and some of their advisers.

The defense minister denied responsibility for the attack on the ELN. The leadership of the organization, however, denied that it was the action of its own fighters.