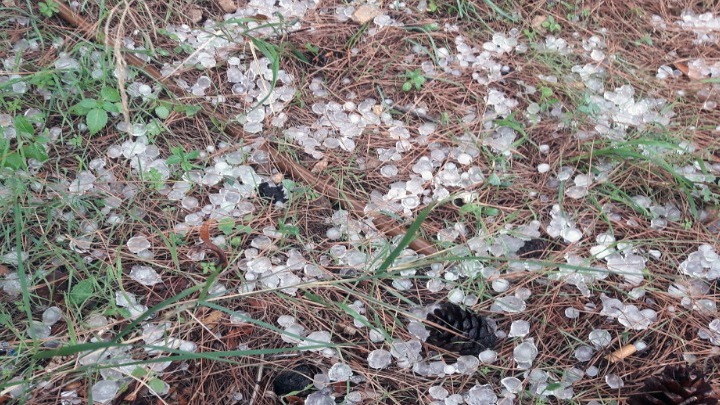 Complete destruction of crops as well as serious damage to houses and the electricity network caused a downpour that hit the wider area of ​​Karditsa yesterday Sunday afternoon.

After the municipalities of Palamas and Sofada, the municipality of Karditsa is also suffering huge losses, with the mayor V. Tsiakos stating that the destruction of the crops in the villages of Paliouri, Kallifoni, Zaimi, Ptelopoula, Melissa, Prodromos, Myrini and Makrichi is

At the same time, in the aforementioned communities there have been many falls of trees and electricity poles, as a result of which most of them face an electricity problem as it is difficult to restore them immediately despite the efforts of technicians.

In the city of Karditsa, the phenomena as Mr. Tsiakos pointed out are limited and the pruning of trees that was done by the Prasinos service in the previous period also contributed to this.

Dozens of calls to the Fire Department

The Fire Brigade announced that "after the event of short heavy rain and hail accompanied by very strong local winds in the greater area of ​​Karditsa, the Operations Center of the Fire Brigade, received 80 calls for tree felling and removal of objects.

"Firefighters continue to operate mainly in cutting down trees, several of which fell on the road.

"We ask our fellow citizens and those who drive, to be especially careful in the wider area where the intense phenomena occurred."

All the crops in Makrychori are damaged by the hail and the producers of the area, as well as others in the prefecture of Karditsa, are in despair.

According to the president of the local community, Costas Argyropoulos, the 13.000 acres cultivated in Makrychori were left empty soil. These are mainly cotton, corn and clover crops.

Mr. Argyropoulos said that he contacted ELGA in Larissa and specifically with the director Mr. Papanastasiou and steps are expected to do an autopsy, adding that Myrini, like Prodromos, is facing similar problems.

In addition to the crops, serious damage was caused to barns from which roofs were left, trees fell, while the local community. Makrychori has no electricity.

Kilkis: Fire in progress in the Municipal Unit of Gallikos

There is a great mobilization of the Fire Brigade for fire, which is in progress in a grassland area in the Municipal Unit of Gallikos in Kilkis. For extinguishing ...
Read more
SPORT CITY

Our national men's polo team will face Hungary in the semifinals on Friday at 9.30 in the morning at the Olympic Games, which ...
Read more
WORLD

Three people were killed and eight others were seriously injured on Wednesday when a high-speed train connecting Munich with Prague violated a stop sign ...
Read more
984

The fire is raging in Evia. The police, the district and the municipality are currently evacuating the village of Rovies after the order ...
Read more
CIVILIZATION

DAVID CRONENBERG "CRIMES OF THE FUTURE" FILM STARTS THE CANADA The Canadian company Serendipity Point Films and the Argonauts SA announce the start of the shooting of the long-awaited Crimes of the Future by the award-winning screenwriter David and C. Internationally renowned actors Tanaya Beatty (Yellowstone, Through Black Spruce) and Nadia Litz (Big Muddy, Hotel Congress, Blindness) are incorporated into the already announced cast of the film, with Viggo Mortensen (A History of Violence, ...
Read more
SPORT CITY

In Kallithea, against NK Lokomotiva, the next friendly game of Panathinaikos will be held, in the context of its summer preparation, next Friday, on ...
Read more
SPORT CITY

Van Haal is officially the coach of the Netherlands

Louis van Gaal is officially the new federal coach of the Dutch national football team. Together with its technical staff, which ...
Read more