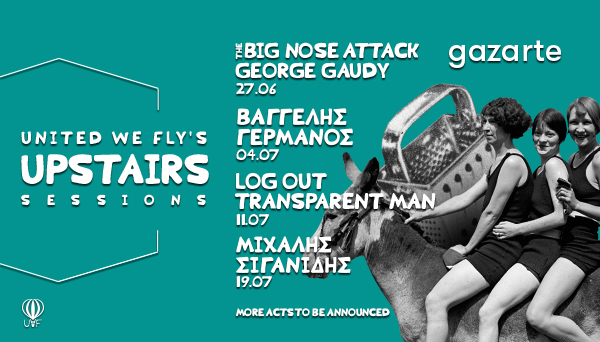 Η United We Fly, returns to live action and presents the new series of concerts Upstairs Sessions on its cool and renewed terrace Gazarte from June 27!

After the two Taste the Music in the Anglican Church of St. Pavlou but also REMISSION, United We Fly has prepared a line up - proposal, with favorite and familiar artists but also with names - surprise. A series of concerts with domestic artists in headline shows and double bills, the vast majority of which present the albums that were released or recorded in the prolonged quarantine we experienced. In the renewed space of Gazarte, in the heart of the city, under the starry sky of Athens, we are waiting for you in the mood and with the clothes of those who were deprived for so many months!

Big Nose Attack meets George Gaudy and his band on the Gazarte rooftop for the first United We Fly Upstairs Session.

The Big Nose Attack, frequenters on the Gazarte rooftop, return hungry to the "crime scene", where they successfully presented in the fall of 2019 their 4th and most recent studio album, "Deader Than Disco". Always based on the blues, funk and soul sounds that grew up - and for their sake they caught the instruments - in the also anachronistic Brahmi of Attica where they live. Definitely the fresh element is the most exuberant orchestration that the duet dares for the first time.

The same night, George Gaudy, a composer, lyricist, performer and orchestrator based in London and one of the most beloved of the Greek public, will take the stage. His characteristic voice that adapts to the needs of each song allows him to create pieces that attract the audience's attention through his particular interpretations and orchestrations. At Gazarte we will hear a setlist with everything we missed from his live performances.

“I tune my guitar and open sails!
With the tray full of songs, at the Gazarte stage for a unique, magical night! ”

Vangelis Germanos, in the context of Upstairs Sessions, takes us - finally - to the bars and goes up to the stage on the roof of Gazarte for a solo show, with all the songs that we have loved from his first emblematic releases until today!

Logout is a songwriter and producer who combines traditional references with lo-fi indie, electronic and experimental elements. In his live performances he combines natural instruments with live-looping, sampling and digital video art while in addition to songwriting he has also participated performing music in theatrical performances of Abovo and Elias Karellas. He has released 4 personal albums, experimenting each time with the musical expression and the combination with Greek or English lyrics.
In his appearance at Upstairs Sessions he will present for the first time live his album "HERE / THERE" with the participation of Nalyssa Green in the song.

Transparent Man is the solo project of Stavros Papadopoulos, a musician based in Thessaloniki. It is a deeply personal project characterized by the combination of atmospheric and electronic soundscapes, guitar melodies and inventive rhythms. He is constantly in search of those sounds that will help him create a musical grid to dress and embrace any form of emotion. Memories, experiences of pain, loneliness, joy and companionship, produce a set of musical contrasts that are reflected in his work.

Having defined as DAMI (dramatized ambient music & images) the creation of musical synapses between recorded audio and visual material (document) and live action music (fiction), complemented by improvisation - a necessary condition for the development of this musical thought - that transforms each time "the same song always", in new material, Michalis Siganidis with the Lambraki Band will present for the first time the material of the upcoming album of "ETIKAETIKAITIKAITI".

See the line up that will be constantly updated:

The president of SYRIZA-PS Alexis Tsipras is going to northern Evia and will tour the areas affected by the fire Source: ΑΠΕ
Read more
GREECE

The air quality over our country and the Eastern Mediterranean in general is still low today due to the many fires in the area. A...
Read more
GREECE

The fire is in progress on the eastern fronts in northern Evia, ie those that threaten the villages of Dafni, Kourkouli, Skepasti and Kechries. Specifically, before ...
Read more
GREECE

Tax returns: 7 out of 10 taxpayers won with tax returns

The process of submitting tax returns is evolving with a significant delay this year, despite the fact that almost 70% of taxpayers have seen ...
Read more
GREECE

The passage of the vehicles of the permanent residents in the area of ​​Varybombi will be controlled. The points where the inspections will take place are: 1. Kymi Avenue from street ...
Read more
SPORT CITY

Kynigakis: "We are alone in our darkness, we have no allies"

Alkis Kynigakis spoke after his impressive performance in Tokyo and the 5th place in the 10km. offshore and stressed that it is very ...
Read more
SPORT CITY

At 40% of the capacity of the stadiums, the presence of fans in the matches of the new La Liga, which starts at 13 ...
Read more