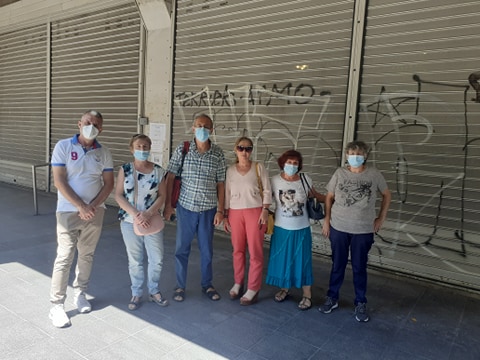 The Secretary of the Municipality of Athens, Alexandros Tsiatsiamis, reiterated the assurance that the Ministry of Interior will be asked to submit an amendment to the Parliament that will allow the continuation of the employment of all school cleaning staff who worked during the current year. at noon, with the members of the Committee for Immigrant Women / Cleaners / Schools of the DA, in the presence of the municipal councilor of Antarsia in the neighborhoods of Athens, Petros Konstantinos.

The cleaning workers demand, among other things, the permanence of all contractors.

A meeting was held on Friday 18 June at 3 pm with the participation of the Committee of Immigrants / Cleaners / Schools of the Municipality of Athens with the General Secretary Alexandros Tsiatsiamis in the presence of the President of the Cleaning Association in the public schools of Attica Lemonia Paschalidos and in the neighborhoods of Athens Petros Konstantinos. The delegation was attended by the employees M. Lindita, M. Losai and P. Skourti while others were present at the site for support.

The delegation demanded the permanent appointment of all contractors, the stay at work of all employees in the cleaning of public schools in Athens without racist exclusions to the detriment of immigrants. He also immediately asked for a one-month extension of the employment of staff who were hired quite late so that he could not receive unemployment benefits.

The Secretary General informed that the Municipality of Athens expects that a meeting will be scheduled with the Minister of Interior M. Voridis with the participation of the Mayor of Athens Costas Bakogiannis in which he will be asked to give an amendment to the Parliament to the Municipality of Athens to proceed with a tender for Continuation of the employment of all school cleaning staff who worked this year.

There is no room for complacency, no deposit of our hopes in the promises of the administration of the Municipality of Athens.

With our struggle and the solidarity of all we achieved our re-employment last year, after our racist exclusion in August 2020. Now with the pandemic having proved how necessary permanent staff in schools is for everyone's health, we can win again!

We want it permanent and stable for everyone and we want it now!

We call on our unions, EKA, WTO-OTE, EEDA, ADEDY, teachers' unions to be by our side and support our struggle!

An extraordinary press conference will be given on Friday at 12:00 (Greek time) by Joan Laporta on the subject of course the "bomb" that exploded in its foundations ...
Read more
COVID-19

The Libyan government announced tonight that it will impose a strict, three-day lockdown, starting on Saturday, to deal with the increase in cases ...
Read more
GREECE

"Invocations to individual responsibility and findings on extreme weather events do not put out the fires. The fires are extinguished with a complete fire protection plan ...
Read more