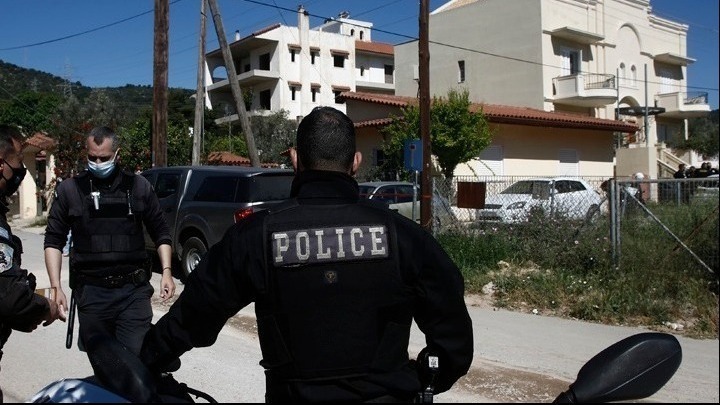 The public is silently watching the shocking facts that see the light of day for the case of the murder of the 20-year-old Caroline by her own husband. Ο 32 year confessed yesterday after many hours of examination to the officers of the Homicide Department of GADA and described exactly how he killed his wife.

He claimed that they often had quarrels and that day they had fought early in the afternoon.

In fact at night, as 32 said yearThe Caroline she kicked him out of the bedroom into the attic and he slept with the baby on the couch in the living room.

At about 4 in the morning he woke up and went to the bedroom. He lay down next to the woman and put the baby between them. Then the Caroline she woke up and asked him to get out of bed. The pilot, as he told the police, blurred and grabbed the woman by the neck and drowned her.

Immediately it started to direct the scene of the so-called robbery post murder. Tie her Caroline pistachio and put her blouse in her mouth that to seem to have had it he muttered the robbers.

He then went down to the living room, strangled the dog with the leash and hung him on the railings of the inner staircase.

About 2 hours later, at 06.15, he called the Immediate Action. He admitted that he was not tied up at the time and did not call with his nose. He just stuck insulating tape in his mouth to make it sound like he was gagging.

He was then tied up alone and casually, as the first police officers who entered the house and released him had testified.

Homicide officials estimate 33-year-old described robbery after murder copying the story told to him by his pilot instructor who had fallen victim robbery by three unscrupulous criminals in July 2018 at his home in Alepochori Megaron.

The evidence that "showed" the killer

Although from the first days after the murder the Homicide officers had understood that the story with the robbers was not true they had to find out unshakable evidence to confirm The his suspicions of his guilt 32 time.

Besides as unique The main suspect in the murder had also become an eyewitness.

After research and the help of technology, the police managed to identify the mistakes made by the 33-year-old.

Upon completion of the technical analysis on his mobile phone, it was found that between 4 and 6, when he claimed that he was tied up and gagged, the 33-year-old was walking inside the house and the application on his mobile phone had recorded the steps.

Also her biometric watch Caroline and the application on her cell phone had recorded the time she left her last breath, shortly after 4 am, while he himself had said that the robbers entered the house shortly before 5 am.

The third and most important mistake was removing the memory card from the security camera. He himself had said that the memory card was removed by the robbers when they entered home However, the analysis revealed that the card had been removed at 1.30, ie several hours before.

He said he cut the memory card and threw it in the toilet.

Also admitted that there was no money that the robbers 10 to 15 thousand euros.

He said that the jewelry was there and hid it outside the house that night. Days later he returned and threw them somewhere else.

According to police sources, during his long examination, he asked how long his sentence would be and when he would return to his young daughter, while he also apologized to the officers who had been in daily contact with him all this time.

Although the pilot attributes the murder to a moment of anger, the evidence shows that he probably had premeditated the crime by removing the memory card from the security camera, while the whole theater that played all this time and the composure he showed while he had murdered his wife and the mother of his child.

Police after the first days of the murder began to understand what had happened but had to gather unshakable evidence of the guilt of the 32-year-old.

This was made possible with the help of technology and after 37 days they solved the crime.

Amateur clubs are paid the tax from the betting tax

The financial aid is paid today to mothers with three or more children, retirees or insured of EFKA-OGA, who declared participation in the Money Provision Program ...
Read more
SPORT CITY

Olympiakos appeal against the Superleague for central management

PAE Olympiakos appealed to the Arbitration Court of the EPO, for the decision of the Superleague to proceed with central management of its television rights. As it is...
Read more
GREECE

A truck with 165.000 packs of smuggled cigarettes was found in Aspropyrgos

A truck with 331 cartons containing 165.000 packs of cigarettes that did not carry the required excise tax strip, was located in Aspropyrgos. The police officers of the DI.AS team ....
Read more
GREECE

Three arrests for the episodes of fans in Patissia

The police made three arrests for the incidents that took place last night at the offices of the Panathinaikos fans' association in Acharnon in Patissia. It is about...
Read more
ECONOMY

Three major categories of retirement are covered by insurance law. At the same time, the Ministry of Labor and Social Affairs is launching the extension - by one year - within the application deadline ...
Read more