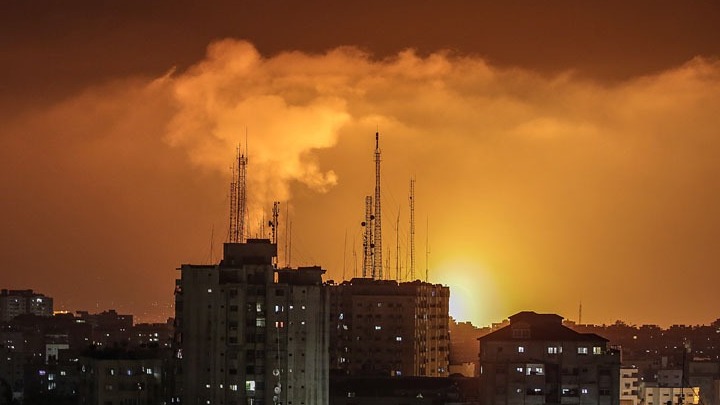 The Israeli Air Force launched new bombings today against positions of the armed wing of the Islamist movement Hamas in the Gaza Strip, according to eyewitnesses and the Israeli staff.

The Israeli military has confirmed that its planes struck Hamas positions in the Gaza Strip, saying it was in retaliation for the use of balloons with incendiary devices to provoke fires in southern Israel on Thursday.

AFP reporters in the Palestinian enclave reported that explosions were heard overnight.

This is the second Israeli offensive in the Gaza Strip since the beginning of the week and after the end of the eleven-day war (May 10-21) between Israel and the armed wing of Hamas, the ruling Islamist wing in the small Palestinian enclave. two million inhabitants.

The Israeli military says it has targeted a Hamas military post and a rocket-propelled grenade launcher in Gaza City and Khan Younis, a town in the southern part of the enclave that has been under Israeli siege for nearly XNUMX years.

The head of the Israeli General Staff, General Aviv Kohavi, demanded that his subordinates "intensify preparations" for a "series of scenarios", including the "resumption of hostilities", following the new conflict in which 260 dead were counted. among them children, teenagers and fighters, and 13 dead in Israel, among them a child, a teenager and a soldier.

The new raids come as Egypt continues its efforts to consolidate the ceasefire agreement that ended the lightning war.

The 9th place in the final ranking in the category of Laser Radial boats, at the 32nd Summer Olympic Games in Tokyo, was occupied by Basel Karahaliou. Although the ...
Read more
GREECE

Another incident of domestic violence occurred, this time in Ialyssos, Rhodes. According to ELAS, late last night, a 47-year-old man initially threatened with a knife ...
Read more
ECONOMY

The Minister of Culture and Sports, Lina Mendoni, conducted an autopsy on cultural projects in Naxos, as part of her tour of the Cyclades. Lina Mendoni performed ...
Read more
GREECE

M. Chrysochoidis: Very improved image of the fire in Achaia

"Today's much improved image of the fire is a result of the coordinated and very big effort of the Fire Brigade, the Police and all its forces ...
Read more
IT HAPPENS IN ATHENS

EKPA research on waste reveals changes in the habits of Athenians in the first lockdown and is presented in an article in a scientific journal. At work...
Read more
News Bulletin Athens 9.84

For a much improved image from the fire in Achaia, result of the great effort of the fire brigade, the police and all the forces, the minister spoke earlier, ...
Read more