Road of Truce 2021: Tribute to the 200 years of the Greek Revolution and modern Olympism 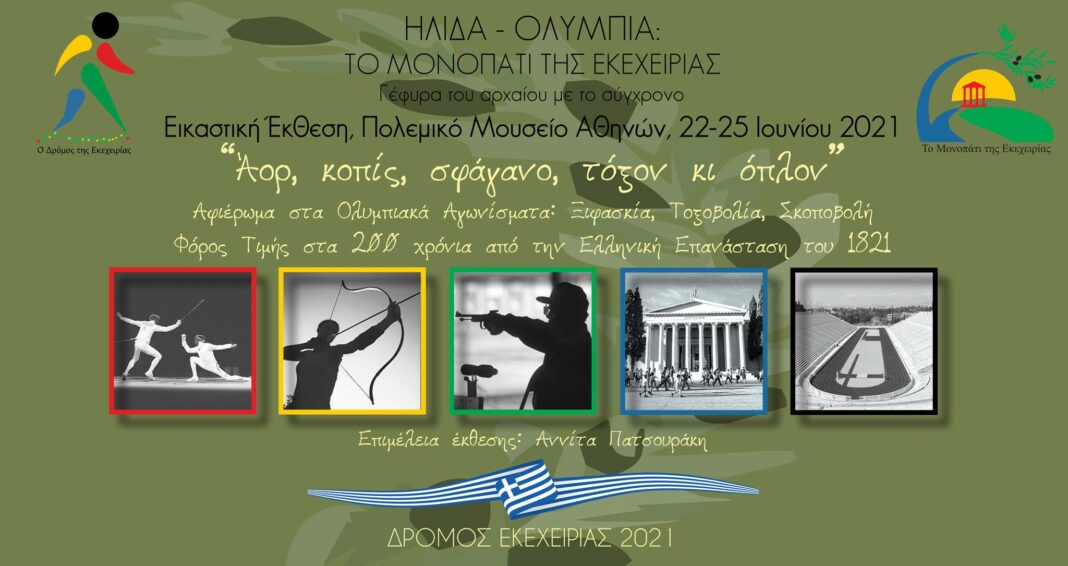 The Confederation of Olympia in the context of the "Truce Road 2021", wanting to contribute to the celebration of 200 years since the Revolution of 1821 and to keep alive in our memory the history and values ​​of our place but also to bridge the ancient with the modern, organizes an event which will take place on Wednesday, June 23, World Olympism Day, at 7.00 pm, in the amphitheater of the War Museum of Athens. In the foyer of the Museum there will be an art exhibition entitled: "Aor, copy, sphagnum, bow and weapon".

The event will honor the two great national benefactors George Averoff and Evangelos Zappas, through the Evangelos Averof-Tositsa Foundation and the Committee of Olympians and Bequests, as they were the pioneers for the implementation of the Modern Olympic Games held in Athens, but also pioneers of the movement of national benefactors. With the sponsorships of the two great benefactors, the Panathinaiko Stadium was restored and it became possible to hold the first modern Olympic Games in Greece and the Zappeion Megaron was built, the first building erected worldwide to serve Olympic needs.

In addition to the two national benefactors, distinguished athletes will be honored during the event Fencing, Archery and Shooting from the first Olympic Games until today.

The art exhibition entitled "Aor, copy, slaughter, bow and weapon", is dedicated to the Olympic values, to the sports to be honored, to the great national benefactors, but also to the sculptor and painter Dimitris Talaganis, who "left" the COVID-19 and who praised the ancient Greek spirit, the Olympic ideals and the strength of the Greek soul!

The event will feature: 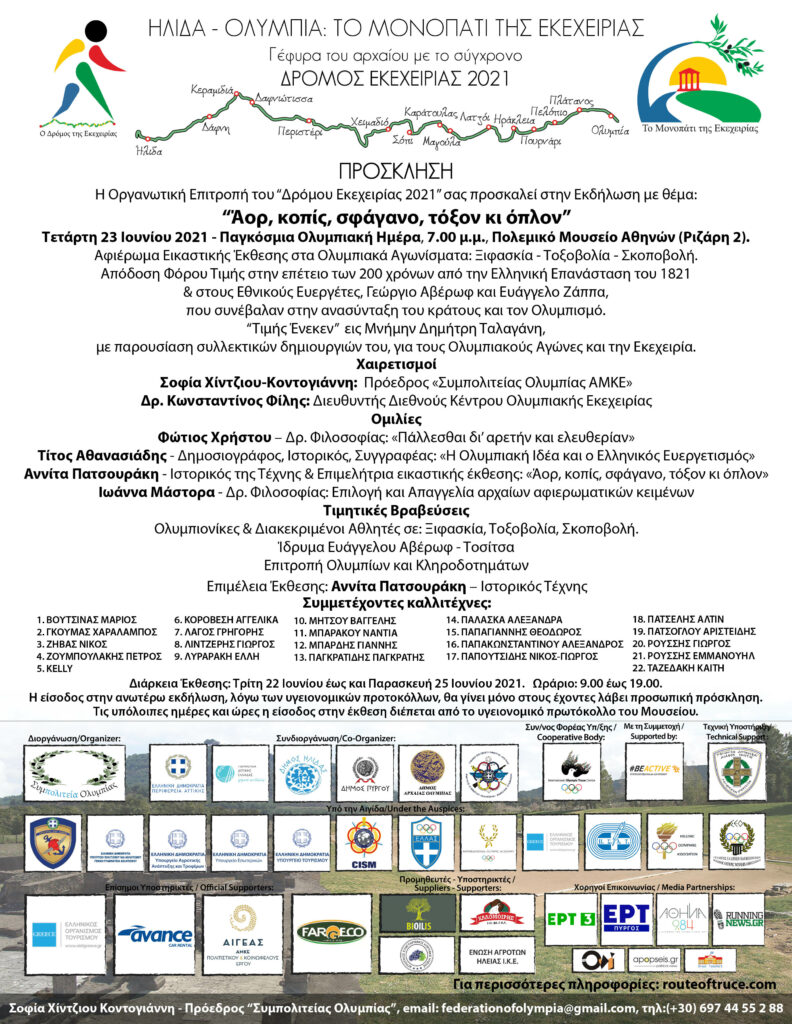 All actions are organized by the Confederation of Olympia and are co-organized with the Regions of Attica and Western Greece, the Municipalities of Ilida, Pyrgos and Ancient Olympia, Collaborating Support Agency the International Olympic Truce Center. The actions are under the auspices of the Ministries of National Defense, Culture and Sports, Interior, Rural Development and Food, Tourism, CISM, the Hellenic Olympic Committee, the Hellenic Olympic Association, the Association of Participants in the Olympic Games, EOT and EOT.

We would like to thank our Supporters for their support and assistance which contributes the most to the promotion and achievement of our goal: Hellenic Tourism Organization, AMKE AEGEAS, Avance car rental, FARGECO Hellas, Kalomiris ELVIGALOS, Agricultural Cooperative IKE, OESI, Bioilis.

Admission to the exhibition is from 9.00 to 19.00 and according to the sanitary protocol of the Museums.

On the day of the event, Wednesday, June 23, all the health protocols against COVID-19 will be applied and the entrance will be strictly by invitations.

More information about the actions in Athens and Ilia at the website http://routeoftruce.gr/ and at tel. 6942 08 80 15 (Konstantinos Kontogiannis).

Fire is in progress in a forest area in the area of ​​Ziria, in the Municipality of Egialia in Achaia. 95 firefighters are operating at the spot with 4 groups of pedestrians, ...
Read more
984

The air directive for domestic flights is extended until Monday 9 August at 06:00 in the morning, according to an announcement by the Policy Office ...
Read more
News Bulletin Athens 9.84

N. Hardalias: We do not want to take any measures, we do not target the islands

For one of the top ten extreme weather phenomena of the last 40 years due to the continuous high temperatures for many days, he spoke about ...
Read more
COVID-19

Britain: Strong urge for pregnant women to get vaccinated

The head of the midwives of England appealed to her colleagues to encourage pregnant women, who have so far been vaccinated in a small percentage, ...
Read more
984

Qualified in the final from the first jump with 8.22m. Tentoglou

With a jump at 8.22m. from his very first attempt in the XNUMXnd group of the qualifying series, Miltos Tentoglou qualified for the final of the length ...
Read more