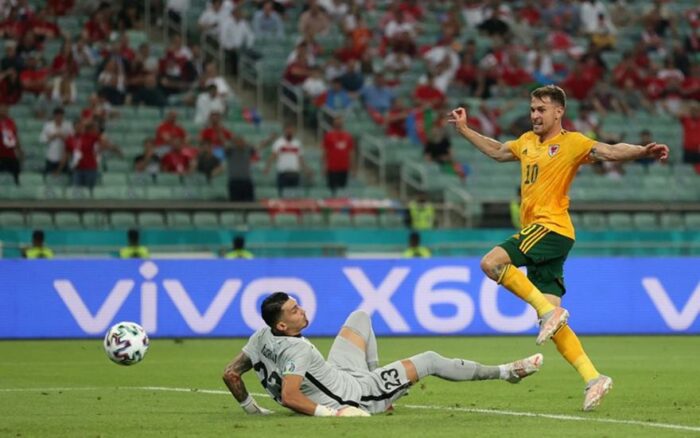 The embrace with the qualification to the next phase of the tournament is Wales, which after the draw in the premiere with Switzerland, won 2-0 with Turkey and reached four points.

At the same time he reduced the hopes of Gunes' team with two defeats in an equal number of games, he sees the train of qualification move away.

Great match by Gareth Bale who did everything except score. He organized his team's game perfectly, he gave the assists in the two goals of Ramsey and Roberts and he would have put the icing on the cake if he had not missed his penalty.

"There were 56 fires today. In the last few days we have several fires in Achaia and several of them have grown in size and developed near houses but also ...
Read more
SPORT CITY

Pyrros took a position on the issue that arose after the statements of Theodore Iakovidis, as soon as he finished his effort at the Tokyo Olympics ...
Read more
News Bulletin Athens 9.84

The fire that broke out at noon in the area of ​​Ziria in Achaia is in progress. Four settlements in Ano Ziria, Kamares, ... have already been evacuated.
Read more
COVID-19

France: Protests in Paris and other cities against the health certificate

Thousands of people demonstrated again today in Paris and many other French cities against the mandatory health card promoted by the government for ...
Read more
WORLD

Borrell - Tsavousoglou communication about the fires in Antalya

The High Representative of the EU, Josep Borrell, had a telephone conversation with the Minister of Foreign Affairs of Turkey, Mevlüt Çavuşoλουlu, regarding the fires in Antalya, pointing out ...
Read more
WORLD

More than 150 fires have been burning in Sicily since yesterday

More than one hundred and sixty fires have been burning on the island of Sicily since yesterday afternoon. According to the Italian public television Rai, a large part ...
Read more
News Bulletin Athens 9.84

The fire is raging in the area of ​​Ziria in Achaia where four villages have been evacuated. These are Ano Ziria, Kamares the Lampiri ...
Read more