Three hundred works of art, paintings, engravings, books, official texts and other items form a visualized narrative of the Struggle of 1821.

Through the technique of projection mapping, they will be projected on June 12 and 13 on the surfaces of emblematic buildings of 18 cities of the country, by choice of the Municipalities themselves and the Parliament building in Athens is prominent. 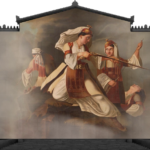 "It's a celebration. An artistic narrative of the Greek Liberation Struggle in collaboration - at the level of granting rights for the items - with dozens of Organizations, such as the National Gallery, the Benaki Museum, the History Museum, as well as the Museum of the Municipality of Athens " said τthe member of the Executive Board of the Committee "Greece 2021", Konstantinos Kontogiannis, at ATHENS 984 and Maria Pavlou.

The project "Desire for freedom" constitutes central action of the Commission "Greece 2021", while in addition to telling the story of the Revolution, the projections contain elements of the recent history of each city and will be enhanced by the installation of atmospheric lighting elements in the surrounding area.. Also, visual content is invested by a original musical composition.

Speaking about the secrets of this innovative venture, Mr. Kontogiannis noted the contribution of the Laboratory of Changing Intelligent Environments (TUC TIE Lab) of the Technical School of the Technical University of Crete.

"The artistic episodes of the work were created through a methodological approach called visual layering, which gives breath to the works of art, giving them depth, movement and sound with the technique of animation, to follow the adaptation of the material on the dimensions and special features of the 18 buildings in which it will be displayed….

In Athens, we had very good cooperation with the Municipality and the electricity sector as well as in security.

At the same time, the narration of the Revolution will be available in digital application

According to Mr. Kontogiannis "From July, ie about a month after the screenings, a digital application (app) will be launched, which, using augmented reality, will offer the possibility to the residents and visitors of the 18 cities to watch, through of their mobile phone or tablet, the audiovisual narrative of June 12 and 13.

… Each user, after the free installation of the application on his device, will be able to watch the project after standing in front of each building and turning the camera of the device on its face.
Also, through the application, which will be available on mobile phones and tablets, Android and iOS, in Greek and English, will have access to information on the actions of the Commission "Greece 2021."

US President Joe Biden is being briefed on developments regarding the Omicron variant of the new coronavirus, the White House said on ...
Read more