Thessaloniki Metro: The Ministry of Culture speaks about the distortion of Lina Mendoni's statements 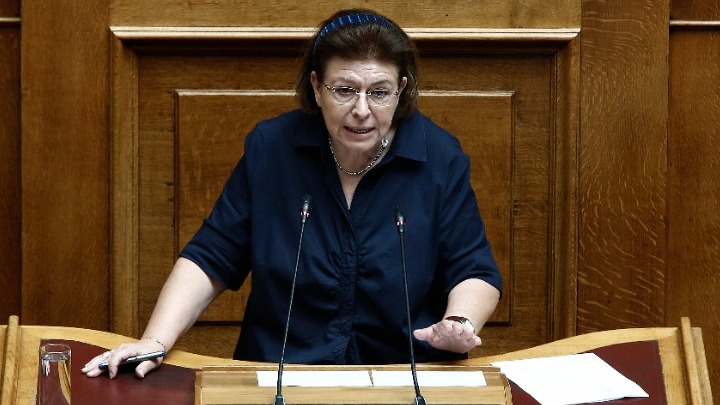 "Where it is possible for the antiquities to remain in the country, it is obviously proposed… At the discretion of the Central Archaeological Council, the temporary posting of the antiquities of Venizelos Station for the duration of the works and their relocation immediately after and in exactly the same place found proves to be solution necessary, appropriate and only ", said among others the Minister of Culture, answering a question of the KINAL MP, Haris Kastanidis, ΄on the subject of the archeological findings at Venizelos Station, on Monday, June 6.

The Ministry of the Interior quoted the entire deuterology of the minister for information because there was a distortion of what she said.

Announcement from the Press Office of the Ministry of Culture

Because once again what the Minister of Culture and Sports Lina Mendoni said is distorted, answering on Monday, June 7, the topical question of the KINAL MP Haris Kastanidis, on "Country preservation of the antiquities of Venizelos station", we quote the text of the Minister's Deuterology.

Those who choose specific points in order to falsify reality, obviously, among other things, ignore the basic rules of the NSRF.

The following is the text of the Minister's Deuterology:

I will not respond in the same offensive way that you used. Nevertheless, I will tell you two points. I do not ignore the fact that you are aware of your institutional responsibilities, but I am also very familiar with mine. In any case, it is not institutionally correct to discuss a decision of the Supreme Court, which has not yet been issued.

Secondly, I belong to those who write their own texts, despite the fact that I have very capable collaborators. I did not insult you, you insulted me. So let's go see the Athens Metro, which I know very well, as then Secretary General of the Ministry of Culture.

According to the decision of the Central Archaeological Council, which in your opinion does not have sufficient prestige and knowledge of the scientists, who constitute - and this is offensive - the temporary posting of the antiquities of Venizelos Station for the duration of the works and the relocation immediately after and in exactly the same position they found proves to be a necessary, appropriate and only solution.

Necessary for the construction of the station, suitable for the protection of antiquities, which are forbidden to be endangered, because with any other solution, depending on the country of residence, the work below can create such conditions that the antiquities are destroyed.

And alone, as evidenced by the fact that apart from "ideas" of polite intentions impossible to constructively and yet unsigned, no study has been submitted to the Ministry of Culture. No study. And a study, which is complete, according to the conditions of the law, what a study means. No brainstorming or just scribbles.

On the claims about the feasibility and safety of the preservation of antiquities by country, you said some things, again in theory. I did not hear anything specific.

The Thessaloniki Metro is the only project within the European Union that has been funded by 3 Community Support Frameworks, as you know very well. To date, Greece has received a total of € 637 million and this amount can reach a maximum of € 852 million by the end of 2023, when the eligibility period of the NSRF 2014-2020 ends.

In case of non-completion of the project by March 2025 at the latest, there is a risk of return of all the money that the country will have received by December 2023. So one understands, not the financial, but the public interest.

All this, which I said and much more, was submitted, fully documented, to the CoC and was discussed at the meeting of 6 November 2020, and since then we are waiting for the relevant decision.

However, since you mentioned that we have a unique case of antiquities here, I must inform you, Mr. MP, that corresponding antiquities of much more important value were found in the adjacent Venizelos Station, in the Hagia Sophia Station.

With the same materials, they can not enter because during SYRIZA the study of the station was modified - this is another story, which we face and will see. So the materials are the same, the antiquities, possibly more important of Venizelos according to some experts, were removed and will obviously be relocated with the care of the Ministry of Culture. Those about materials and hazards, at least, are not documented.

As for the major archeological site, let me remind you, I am sure you know that during the construction of the metro at Syntagma and the Parliament parking lot (it was a combination of the two projects at the time) a very large site was demolished and moved, which today is the Archaeological Park on campus and is used by Archeology students.

I say this only in terms of size so as not to be misunderstood, because for the antiquities that will be removed, there is already a study, approved by the KAS and for the decision and for their relocation.

Monuments declared and included in the list of World Heritage Sites were removed, placed in a different, short distance, location in Egypt and remained a UNESCO World Heritage Site. So let us not take any risks, ladies and gentlemen.

If he has construction studies, it is entirely possible for anyone to have them. But such studies do not exist or at least have not been made known to the competent Ministry of Infrastructure and the Ministry of Culture. The two you mentioned above are well known and do not guarantee buildability.