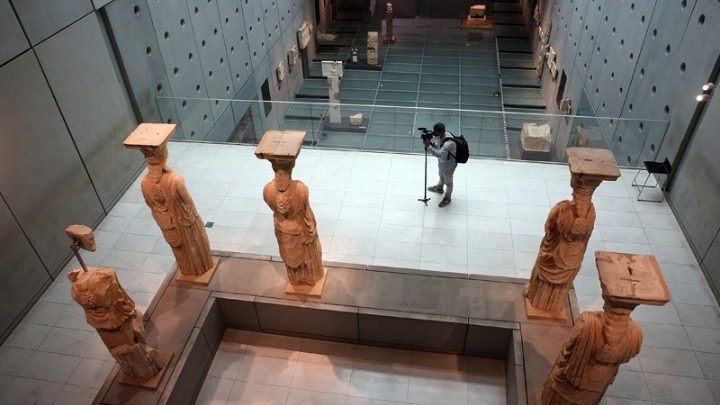 Museums across the country are welcoming the public again from today, Friday 14 May. The safe opening of the museums adds to the smooth operation of the archeological sites, which are open to visitors from March 22, and marks an important step in the gradual reopening of the country's cultural infrastructure.

"Just before the day of the celebration of the International Museum Day, the museums reopen their doors for the citizens of the country and the visitors from all over the world" said the Minister of Culture and Sports Lina Mendoni.

"In view of the dynamic start of the tourist season, our main concern is the safe return of the public to the places of culture, which remained closed for a long time due to the restrictive measures imposed by the epidemiological data.

The National Gallery is ready to welcome the public, while their doors open in May and the new museum spaces at the Ziller - Loverdou Palace in Athens and at Arethousa in Chalkida. Refreshment bars (depending on the restaurant) will operate with protection measures, as well as shops (depending on the commercial stores) by the Organization for the Management and Development of Cultural Resources. The Ministry of Culture and Sports takes care of the smooth reintegration of cultural activities in the daily life of the citizens ".

Watch the video produced by the Ministry of Culture for the reopening of museums here:

The Acropolis Museum: Ready to welcome its visitors

A few hours before the coveted opening of the museums and the Acropolis Museum, one of the most important and beloved in the world, is ready to welcome its visitors. As in the first, so in the second, this time extended, lockdown, the Museum did not remain dormant.

Its staff moved creatively to the digital world, offering its virtual visitors unique applications, some of which the public can enjoy from tomorrow and live.

"The Acropolis Museum is looking forward to May 14th to reopen its gates to the public after many months of being closed. However, this period gave us the opportunity to re-preserve a number of ancient works or to erect some of them from the beginning and, most importantly, to complete a large project, the Digital Acropolis Museum. It is a diverse program, with many strands, one of which was the creation of the new website, the launch of which coincided with the lockdown period, giving the Museum the opportunity to address if not to the physical, at least to its digital audience in which is just as big ", said Stamatia Eleftheratou, Director of Collections and Exhibitions of the Acropolis Museum. The digital applications of the Museum

"The new website of the Acropolis Museum is not a simple website. It is a whole world, which captures the life and activities of the museum. It is also the first museum website in Greece to which all the exhibits of the Acropolis Museum have been posted. That is, the visitor can find for each exhibit a description, rich bibliography and plenty of supervisory material, ie images and videos - where they exist.

Also, our website has a website that is aimed only at children, with rich activities and imaginative videos and games. In addition, a series of digital applications, interactive or video, have been created, which the visitor can see in the physical space of the Museum, but also on the internet ", Ms. Eleftheratou added, stressing, however, that some of these applications will not be immediately accessible, that is, as long as the strict sanitary measures last "Touch screens, for example, will not work. But we can get an idea of ​​the full picture of the Acropolis Museum when the restrictive measures are lifted. " "The equipment provided by the project Acropolis Digital Museum gave us the opportunity to create two new spaces on the 2nd floor. One is the Multimedia Center and the other is the Children's Corner ", noted Mrs. Eleftheratou.

On the touch screens of the Multimedia Center, visitors learn about the adventures of some of the most important works of the Acropolis and their distribution in various museums around the world, while in the Children's Corner the little friends of the museum can be entertained with digital games and fun videos . In the same Children's Corner there is the hologram of the lost ivory statue of Athena the Virgin, work of the sculptor Pheidias, which was located inside the Parthenon. The small-scale holographic projection was created based on ancient copies of the statue and references to written sources. The video that shows the daily life of children in ancient Athens - specifically in the ancient neighborhood where the museum was built many centuries later - or the game "Gigantomachia", which is known to be depicted on the metopes on the east side of the Parthenon, are just some of the pleasant possibilities offered in the Children's Corner.

"The entire 2nd floor is a service area for visitors, adults and minors. Apart from the Children's Corner and the Reading Room, which pre-existed, now there is also the Multimedia Center which will be constantly enriched with new applications and where one can rest and, at the same time, have a very nice view of the Caryatids and the Hall of Of the Acropolis ». 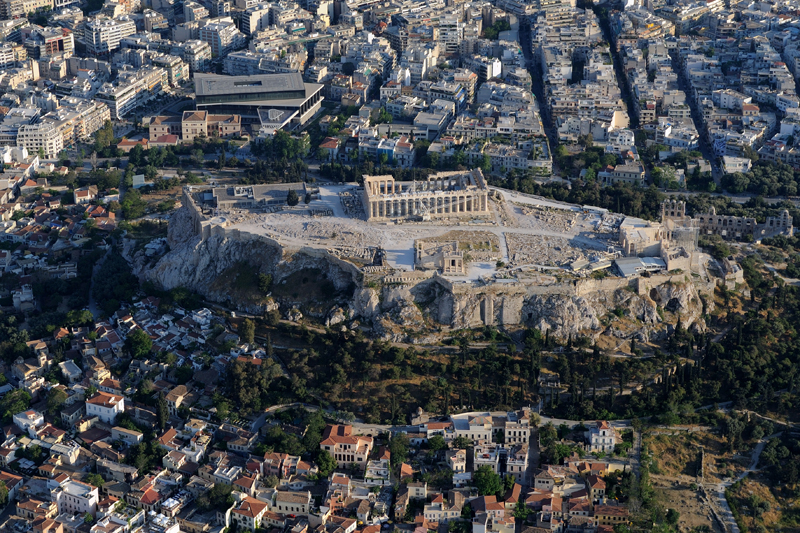 New applications, however, enhance the interest of visitors in the other areas of the Acropolis Museum. For example, In the thematic sections of the 1st floor that concern the Erechtheion and Athena Niki, two screens -one in each section- show informative videos that solve many questions.

"In this way we 'tie' the exhibits that are parts of the monument with the monument itself. In order for the visitor to understand what it was like, to learn briefly his history and to be able to better understand what he sees ", clarified Mrs. Eleftheratou. On the same floor, another fascinating digital program recalls the charm of the signs we often pass. "Inscriptions are not usually very appealing, but they tell a whole story that is very difficult to tell with a caption or an introductory text.", he added. This program changes the light and reveals the engraved letters and the details of the relief forms, giving the opportunity to explore the secrets that hide 20 of the inscriptions of the Acropolis, but also the domestic and foreign policy pursued by the Athenian Republic in the 5th and 4th ai. ai. e.g.

The acoustic tour of the Acropolis Museum is completely new. Once things are fully recovered, visitors will be able to use the audio guide to learn about top 60 exhibits in a two-hour audio tour. And if there is not enough time, the smaller version of the application that includes 30 exhibits gives the solution.

The tour, which is in Greek and English, is also supported for people with hearing problems, who will be able to read the texts on the screen of the device. "There is another version that addresses families. With it, the whole family will be able to watch a very pleasant tour of some important exhibits of the Acropolis Museum. The digital tour is a completely new application, but we will not be able to give it immediately as long as the measures last. Hygiene issues do not allow it. But when all this history is over and the Acropolis Museum is fully operational, we are ready to make it available. ", stressed Mrs. Eleftheratou.

On the ground floor, an original interactive application with the most important exhibits of the Acropolis Museum welcomes visitors. Sixty works of art invite the public to a pleasant "play" of touch and a first acquaintance with the Museum's collections before entering the exhibition spaces - or after the tour, as in our case when we said goodbye to the hospitable Acropolis Museum with a another surprise application which will be available when the measures allow it: A digital interactive map at the exit that presents the most important archeological sites and museums of the city with all the necessary information to reach them.

"Monkey" clothes were confiscated and destroyed, while at the same time fines were imposed, during an anti-trafficking operation that took place today at the public market in ...
Read more
984

The new cases of coronavirus today, Saturday, October 23, were announced by EODY. According to the information, during the last 24 hours in Greece, 43 new deaths are recorded ...
Read more
WORLD

Tens of thousands of Hungarians took to the streets of Budapest today to commemorate the 1956 revolution against the Soviets and to express their support ...
Read more
984

The episode with the shootings on Tatoiou Avenue in Nea Erithraia had a tragic end. Despite the efforts of the doctors to keep him alive, he concluded, ...
Read more
SPORT CITY

Stefanos Tsitsipas, who remained in third place in the world with 7.995 points, behind the Serb Novak Djokovic and the Russian Medvedev, ...
Read more
GREECE

SYRIZA-PS demands explanations for the attitude of the Greek Police in yesterday's episodes in Perama, with an announcement and states that "what happened ...
Read more
984

A case is being filed against 7 police officers for the fatal injury of the 20-year-old last night in Perama. These are police officers of DIAS teams who participated in ...
Read more