The appointments that were closed from today until July reached about 4,5 million 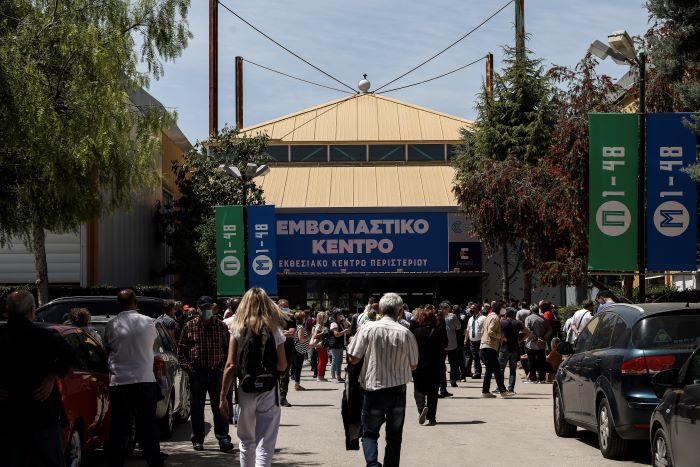 Approximately 4,5 million confirmed appointments were made between today, Saturday and July, while the data show the first citizens aged 50-54 who either underwent the first dose of vaccination against Covid-1 or proceeded to a scheduled appointment recording 19 vaccinations or an appointment.

The age group that follows is 45-49 years old with 300.476 vaccinations or scheduled appointments. As for the citizens who have already been vaccinated or have made an appointment, they have exceeded 4 million, as the Minister of Digital Government, Kyriakos Pierrakakis, characteristically stated in his post on social media.

Specifically, according to the data, until the evening of Thursday, May 6, the separate age groups that have been vaccinated with a dose or have a scheduled appointment are the following:

- the group of citizens aged 30-39 with 222.456 single dose vaccinations or scheduled appointments

- the age group of 40-44 with 154.666 single dose vaccinations or scheduled appointments

- the group of citizens aged 45-49 with 300.476 single dose vaccinations or scheduled appointments

- the 55-59 age group with 271.087 single dose vaccinations or scheduled appointments

Regarding the first ten in the total vaccinations according to the data per regional unit until Friday, May 7, most vaccinations have been done in the central sector of Athens, which reached 451.269 with the first dose reaching 1 vaccinations and the 294.565nd dose reaches 2.

Third comes the northern sector of Athens with 378.359 vaccinations to have been carried out with the first dose ranging to 1 vaccinations and the second dose to 244.621.

Next is the western sector of Athens with 161.679 vaccinations in total. In particular, first dose vaccinations were performed 1 and second dose 111.097.

Fifth in a row is the southern sector of Athens with 125.024 vaccinations with the first dose reaching 1 and the second dose 96.101 vaccinations.

It is followed by Eastern Attica with a total of 89.776 vaccinations and specifically with first dose vaccinations of 1 and of the second dose of 64.398 vaccinations.

Below is recorded Achaia with a total of 86.342 vaccinations. The first dose reaches 1 and the second dose 59.928 vaccinations.

A little below is Heraklion with a total of 85.601 vaccinations, the first dose of 1 and the second dose of 58.960 vaccinations.

India recorded 24 new cases of covid-60.753 and 19 deaths from the disease in the past 1.647 hours, according to an official announcement. In total in the country have been recorded ...
Read more
COVID-19:

The Ministry of Health of Turkey informed yesterday Friday that in the previous 24 hours 5.575 cases of SARS-CoV-2 were confirmed, with the total number of people who ...
Read more
WORLD

New clashes between security forces and protesters broke out in Cali, in southwestern Colombia, resulting in one death between the participants in ...
Read more