Mytilene: Meeting of N. Mitarakis with the new Secretary General of the Aegean and Island Policy M. Koutoulakis 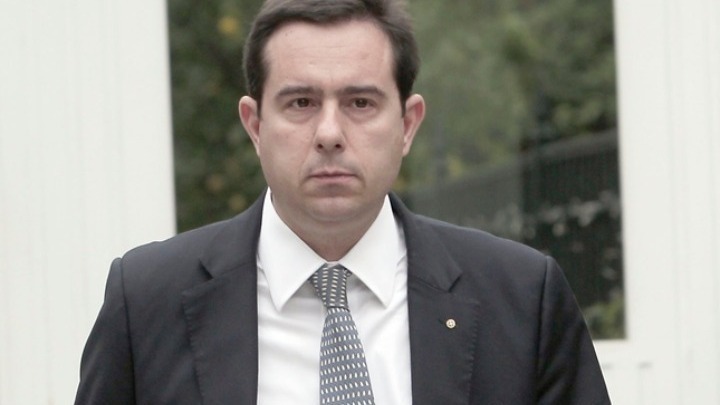 The Minister of Immigration and Asylum, Notis Mitarakis, met with the new Secretary General of the Aegean and Island Policy, Manolis Koutoulakis, at the headquarters of the Secretariat in Mytilene.

During the meeting, Mr. Mitarakis reiterated the need to maintain the reduced island VAT for all five Aegean islands that bear the brunt of the immigration issue, because on June 30 its six-month validity expires.

Mr. Mitarakis and Mr. Koutoulakis discussed at length the need to strengthen the vessels that carry out patrols on the island of Lesvos, while in his capacity as MP for Chios, the Minister noted the need to speed up the works, in the building of the Chios customs.

The new Secretary General of the Aegean and Island Policy Manolis Koutoulakis also had a meeting with the President of the Lesvos Chamber Vangelis Myrsinias and the Steering Committee of the Chamber during which all current issues of mutual interest related to island politics and island politics were discussed. Mr. Koutoulakis stressed the importance and value of the role of the General Secretariat of the Aegean and Island Policy and its consolidation in Mytilene as a center for decision-making regarding island policy.

In a statement, Mr. Koutoulakis underlined the following:

We created the bases of a different regional policy, with special financial tools, so that insularity is a vehicle for the development and preservation of the territorial cohesion of our country, with the result that Mr. Plakiotakis presents, for the first time, a coherent legislative proposal, which focuses the islander resident and the islander businessman.

It is our duty and responsibility to work effectively to justify the citizens' trust in the government, without losing a single day. The development course of our islands is a challenge, to which, with the help of the employees of the General Secretariat of the Aegean and Island Policy, we are ready to respond ".

Pandemic indicators are still improving today. EODY announced 248 new cases of coronavirus, of which 111 in Attica. 14 is ...
Read more
984

Freshwater Crime: The 33-year-old pilot organizes his defensive tactics - What penalties are provided

His defensive tactics are organized by the Security, where the 33-year-old pilot remains detained, who after his shocking confession, is now waiting for ...
Read more
984

CONCERT ON THE RADIO Tonight at 21:00 WOMEN SINGERS Singers: Elli Paspala Dimitra Selemidou Presented by Margarita Mytilineou and Aristea Giannou And we arrive, hopefully, at the tenth Concert, at the ...
Read more
984

The new cases of coronavirus increased to 248 in 24 hours. At the same time, 14 new deaths were recorded, while 296 patients remain intubated in the Intensive Care Units per ...
Read more
984

The Prime Minister will pay an official visit to Egypt tomorrow

Prime Minister Kyriakos Mitsotakis will pay an official visit to Egypt on Monday, June 21. At 12:00 (Greek time) the Prime Minister will meet with the President ...
Read more
984

How supermarkets and shops of the Holy Spirit will work

Shops and supermarkets will be open on Monday of the Holy Spirit, June 21, 2021, while their opening hours will be the same ...
Read more
984

Unstable weather is expected on Monday with rains or thunderstorms from noon onwards, mainly in the central and northern continents, according to the network ...
Read more

Where are free coronavirus tests performed on Sunday 20/6

On Sunday, June 20, 2021, the Acropolis Museum closes its 12 years of operation, having gone through its most difficult year, after it remained closed ...
Read more
IT HAPPENS IN ATHENS

The city's favorite architectural festival could not fail to return this year, even online. The online event includes a livestream and ...
Read more