Public art as a tool for social change

The reason for it international initiative Paint the Change, which in our country implements the Impact Hub Athens. The ongoing action aims to link public art with the empowerment of young communities by encouraging the collective design of large-scale projects that reflect the social quests of local communities.

After a series of educational workshops with organizations and schools in Athens, Paint the Change has "strong messages" that will soon be visualized on the walls of the city!

"The workshops were held in Primary Schools, Gymnasiums and Lyceums of Athens, in refugee accommodation structures, in KETHEA structures", he says in Athens 9.84The Sophie Lambrou from the Impact Hub Athens team. "The participation was excellent and the participants decided that the social issue, which unites them and they chose to visualize it in the streets of our city, was the issue of the climate crisis. They will be created this way, at the moment we are in negotiations with the owners of the buildings, 3 large murals. One mural will be made in Liosion at Larissa Station, the second in Alexandras Avenue and the third in the city center near Varvakeio Agora. Three places in Athens are busy. At the same time, the participants will be involved in the production of a series of video-documentaries, which will be created during the implementation of the murals, with the guidance of experts in the field of filmmaking.

"Our next step will be to connect all this work and the messages we received from children and teenagers with an environmental awareness campaign we are preparing " completes Ms. Lambrou. "The campaign will be a reminder of the relationship between people and especially Greeks with nature. 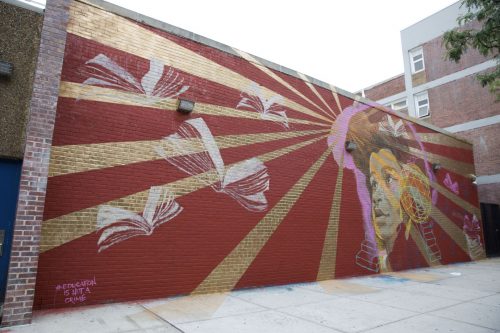 "Paint the Change is an international movement for street art, which uses murals as a tool to convey messages on various social issues that concern each region," he explains. Sophie Lambrou. "The messages come from a co-creative process of the inhabitants of each area. The movement started in New York, moved to London and has now reached Greece and Serbia. Murals have been created abroad that highlighted themes such as: women's right to education and employment, climate change, violence, xenophobia and exclusion ".

The initiative Paint the Change is based on the belief that public art plays a powerful role in transforming communities. Recently, the initiative produced murals in Tower Hamlets of London with portraits of local heroes, selected by residents of the neighborhood. The campaign also produced one monumental mural for the tragedy of Grenfell Tower.

Small breaths of freedom with the resumption of more and more activities, starting today with the opening of organized beaches, the government announced. From the...
Read more
WORLD

Colombian President Ivan Duque demanded yesterday the removal of the roadblocks that have multiplied after ten days of bloody anti-government demonstrations, which have ...
Read more
COVID-19

As of today, the organized beaches are reopening, while the percentage of area per customer, which corresponds to stores over 500 sq.m., is reduced to 50 ...
Read more
984

Porto Summit: The "27" adopt a text on employment

The leaders of the 27 governments of the European Union are expected to adopt today, during their informal meeting in Porto, a statement on employment and ...
Read more
984

The nurseries are open again from Monday, May 17th

The reopening of the nurseries from Monday, May 17, was announced by the professor and member of the Committee of Experts Vana Papaevangelou. As he explained, its members ...
Read more
News Bulletin Athens 9.84

The government announced the opening of a series of activities with the reopening of the organized beaches from today. Kindergartens, Primary and Secondary Schools are reopening from Monday, as well as ...
Read more