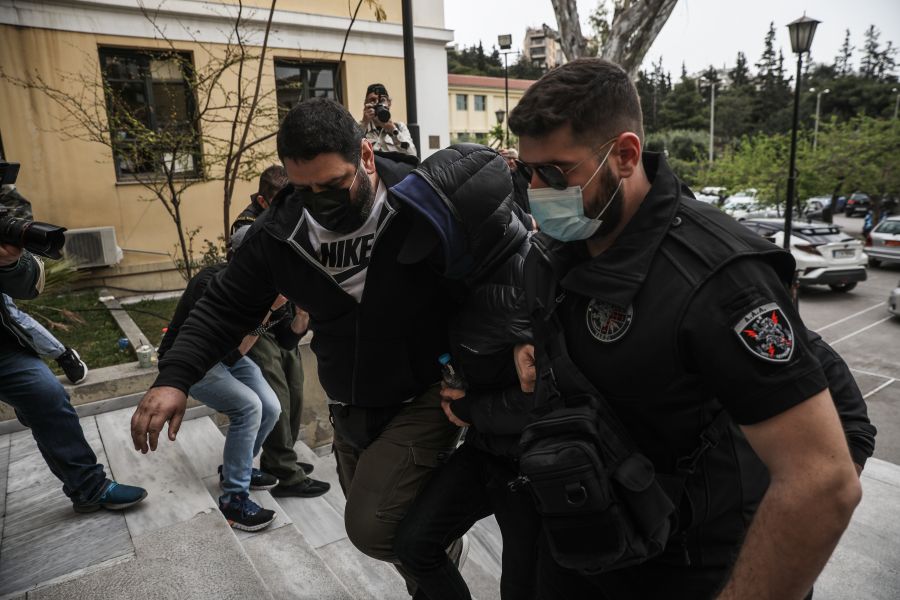 The presenter Menios Fourthiotis was taken to the prosecutor of the criminal prosecution, who joined wearing handcuffs. Two more people were arrested with him, who have been arrested, in the context of the Attica Security investigation, for the attacks on his house in Dionysos, as well as the shootings against DIAS police officers in Nea Erithraia. 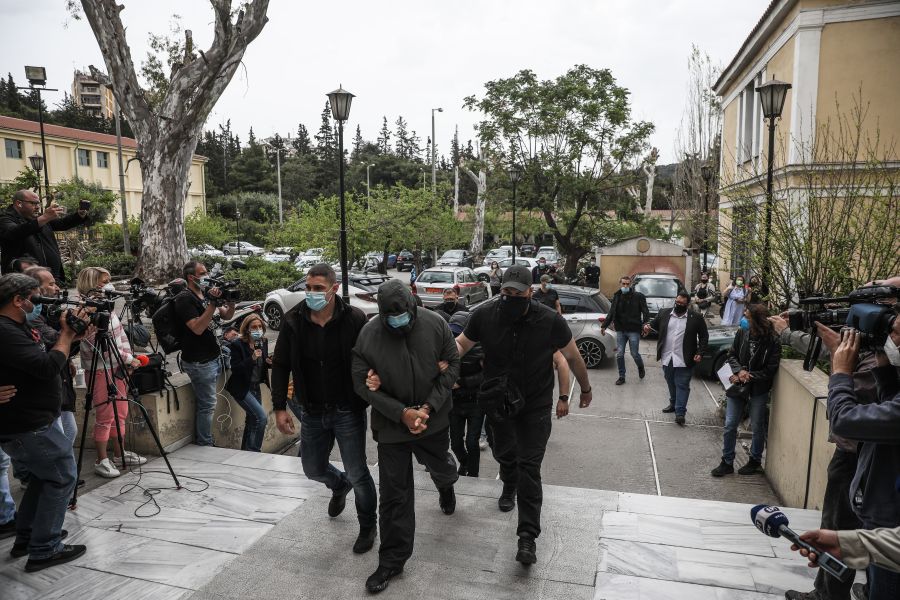 "The Police are always fighting on the front lines, with absolute dedication to their mission," said in a message on social media the Minister of Civil Protection Michalis Chrysochoidis and added: "Its success to quickly resolve an extremely unpleasant case, leading them suspects in Justice, testifies to her high professionalism. I feel the obligation to publicly congratulate the team that worked on this case ", concludes Mr. Chrysochoidis.

I feel obliged to publicly congratulate the team that worked on this case. (2/2) https://t.co/7VHHvzCL1b

Under the microscope of the prosecutors are also the complaints from the journalist and publisher of Documento Costas Vaxevanis, against the death contract in which a presenter is involved.

Menios Fourthiotis is accused of instigation of attacks on his home, both with a Kalashnikov and with an explosive device on the garage door, as, according to reliable police sources, it is alleged that the had directed it himself, after removing his police guard and had hired the two of the other detainees to carry them out.

As it emerged, however, from the police investigation of the Attica Security Extortion Prosecution, They themselves shot at DIAS police officers when they tried to control them in New Eritrea.

According to the results of the ballistic investigation, it turned out that the Kalashnikov used was the same in Nea Erithraia and in the house of Fourthiotis.

According to the same information, Fourthiotis knew the two perpetrators, who are people with a criminal past at night, in the area of ​​Piraeus and had used them in the past as security, as they themselves reported.

The third of those arrested is the brother of one of the two, who allegedly helped them hide the motorcycle with which they escaped after the shootings against the police.

It is noted that one of them had been identified from the beginning almost by DNA in a bag that fell on them in New Eritrea.

Three different prosecutorial investigations have been ordered ex officio by the competent authorities for what has been made public in recent days, with the TV presenter as the main person. Menu Fourthiotis, who according to information was arrested and will be taken to the prosecutor.

Reminded that this is held from yesterday in his offices Security Extortion Prosecution Department together with three more people. It had preceded by η call of the TV presenter for deposit at the offices of the same service and afollowed by an attack by the Hellenic Police, in the presence of a prosecutor, at the home and office of the presenter on channel E.

According to information, computers and other items have been confiscated from the office of Menios Fourthiotis as part of the investigation.

Prosecutors with careful steps, under absolute secrecy and with respect for the presumption of innocence, as required by domestic law, but also the European Convention on Human Rights examine one by one the facts which gave rise to their intervention, in order to ascertain whether and what criminal offenses may have been committed.

And at the end of each of these pending lawsuits the competent prosecutor is the one who sovereignly decides whether to proceed with the criminal prosecution , where appropriate when there are indications of performance criminal or will proceed with the archiving of the file when the data at his disposal are not able to substantiate any criminal act.

The first case was formed following a relevant order of the head of the Financial Prosecutor's Office, Christos Bardaki and concerns the control of economic activities of M. Fourthioti, ενώ η second case opened based on the order of the head of the Athens Prosecutor's Office of Salvation Papageorgakopoulou  on the occasion of the statements -complaints of the former Minister of Labor Giannis Vroutsis that the Fourthiotis with thumbs up invaded the ministry and threatened for five hours.

In order to fully and quickly investigate this case, the competent auditing authorities have been asked to consider all the data for the "tax" profile of M. Fourthioti, so that the data can be immediately forwarded for processing and evaluation to the prosecutor.

As it became known, for the "case Fourthioti»On the initiative of the Minister of Labor and Social Affairs, Kostis Hatzidakis, the information concerning the execution of the mechanism was forwarded to the prosecutor "COOPERATION». The memorandum also includes detailed data on payments to employees of specific companies in order to investigate any criminal liability for submitting inaccurate statements under the mechanism "COOPERATION».

The third case concerns the issue of the fake identity of the Athens Daily Newspaper Editors Association που allegedly possessed by the presenter, a case for which he has taken the necessary legal action and the Ε.Σ.Η.Ε.Α requesting its full investigation.

Finally, the intervention of justice was provoked only last Sunday by the publications with the complaints - revelations of the journalist Costas Vaxevani  that his life is in danger. The Chief Prosecutor of the Athens Court of First Instance ordered a preliminary examination, during which the journalist's complaints will be investigated, in order to determine if and by whom persons any criminal acts such as inciting and offering a misdemeanor or misdemeanor have been committed.

The investigation was assigned to the Security, where it is expected to start the cycle of investigations taking a statement from K. Vaxevani.

ΣτΕ: And a second rejection of Fourthiotis' request for suspension of the reduction of his security measures

Meanwhile, the State Council of State issued a second rejection decision at the request of the arrested presenter Menios Fourthiotis, who had appealed against the decision of the Chief of Police to reduce his protection measures. The Fourth Chamber of the Supreme Court (chaired by Vice President Maria Karamanov and rapporteur Christiana Bolofi) with its decision No. 90/2021 of the Suspension Committee, rejected his request. Meniou Fourthiotis, on the grounds that the damage he claims he will suffer from the contested act of the leader of EL.AS. "Does not justify the grant of the requested suspension, which must therefore be rejected."

In the request for suspension, he claimed that from the disputed act of the Leader of EL.AS. There is a danger to his life and physical integrity, while he has been subjected to a series of attacks, which leads to the conclusion that they will continue, which at the same time translates into a constant and immediate risk of serious bodily harm, even death.

The State Counselors point out that after the restriction of the security measures, Menios Fourthiotis has not invoked new incidents that would endanger the safety of his life and therefore judged that the damage he invokes will suffer from the contested act leader of EL.AS. "Does not justify the granting of the requested suspension". With this reasoning, the judges rejected the request for suspension.

ILO: The impact of the pandemic on aggression is greater than expected

The impact of the Covid-19 pandemic on work proved to be stronger than predicted, according to estimates by the International Labor Organization published today. The...
Read more
WORLD

Luxembourg: Prime Minister accused of plagiarism in his dissertation

Accused of plagiarism in his dissertation at the University of Nancy, the Prime Minister of Luxembourg Xavier Bethel admitted today that "he should have done ...
Read more
SPORT CITY

David Beckham received 177 million euros to be the central figure in the Qatar World Cup campaign, a fact that caused the intense ...
Read more
WORLD

Berlin for Greek-Turkish: Solutions only through talks and in a spirit of mutual respect

The governmental representative of Germany, Stephen Seibert, in view of the forthcoming visit of Angela Merkel to Greece, reiterated that, regarding the Greek-Turkish relations, ...
Read more
984

Last joy to Fofi Gennimata - Shock her children: You left a fighter - We will follow what you taught us

In her last residence, in the First Cemetery, in the same place where her father was buried, she will be led in a short time, the ...
Read more
SPORT CITY

Fenerbahce issued a statement on the refereeing. The Turks who play on Thursday at SEF with Olympiakos, are protesting against some refereeing decisions in ...
Read more
SPORT CITY

Swimming: The mission for the European 25m Swimming Pool Championship

In Kazan for the 20th total participation of Greece in the European Swimming Championship of 25 ara pool (November 2-7), 5 of our swimmers will go on Friday who, ...
Read more