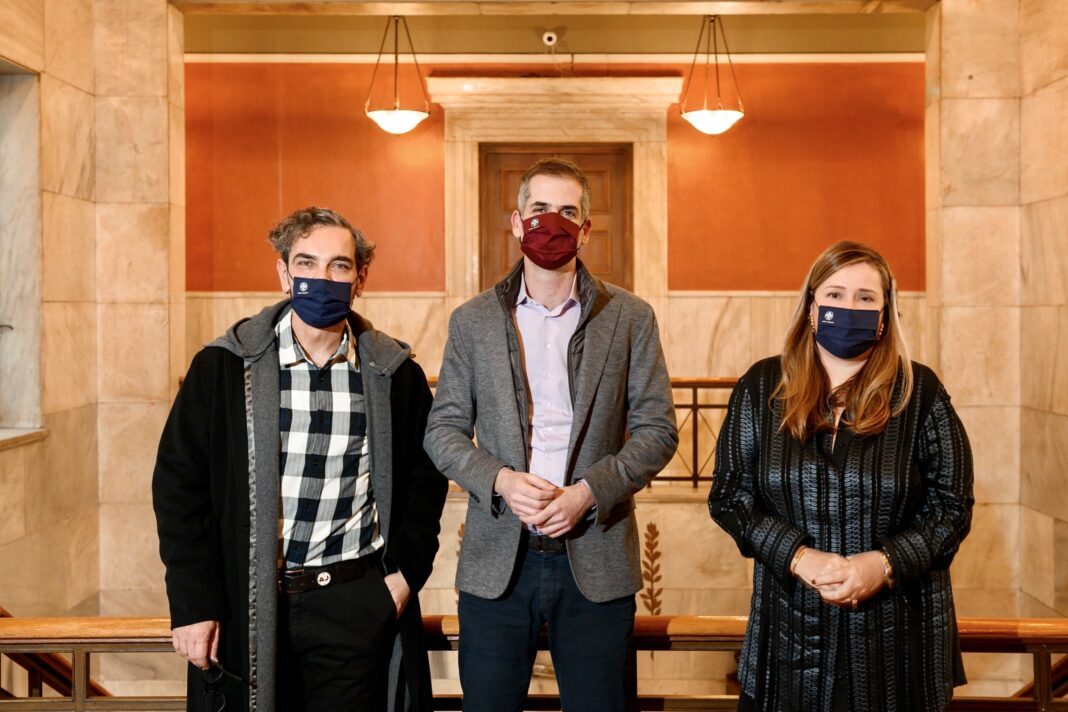 The tender procedures for the radical renovation of the historic and emblematic Theater Square, behind the City Hall of Athens, begin. The budget project ...
Read more
PLUSATHINA

Meet the tribes of Athens An emerging outdoor exhibition with 5 wooden installation boxes, which highlight the traditions of different cultures through art, music, food and ...
Read more

In the implementation of a three-year plan for culture, aimed primarily at empowerment of artists and cultural workers, who have been severely affected by the health crisis, in the utilization and creation of modern infrastructures, but and the Municipality of Athens is proceeding with the realization of a single program of cultural events for all.

For the implementation of the program o Municipality of Athens joins forces with the two cultural institutions of the city who have in their potential people with many years of experience and significant know-how, the Culture, Sports & Youth Organization (OPANDA) and Technopolis. Helper in this effort and the Regeneration of Athens SA. He also collaborates with Ministry of Culture & Sports and Attica, while continuing the creative synergies with the cultural institutions of the city through him Athens Culture Net.

The team of the Municipality of Athens is strengthened with two renowned professionals with an important course in the field of culture: The art historian, museologist and curator of exhibitions Mr. Katerina Koskina as Advisor to the Mayor of Athens for cultural issues and Mr. Olivier Decott (Olivier Descotes), as Artistic Director of OLYMPIA Municipal Musical Theater "Maria Callas" and in charge of the artistic program of the Music Ensembles of OPANDA.

The first priority of the Municipality of Athens remains the continuous and practical support of artists and employees in the field of culture, who have been severely affected by the effects of his pandemic Covid-19. The report of the artistic events of 2020, despite the pandemic, closed with a positive sign. In 2020 they took place in total 116 events, which were attended by more than 31.000 spectators and 8.000 digital spectators, while 780 beneficiary artists and employees attended from the field of culture. All this was made possible with the support of the Municipality of Athens, which offered its infrastructure and equipment free of charge to the affected artists, always applying the prescribed sanitary measures.

This year the summer, for 2η year, the premises of the Municipality of Athens will reopen. The Technopolis, the theaters of Kolonos and Gravas of OPANDA, but also AB cinema will be available for concerts, theatrical performances and dance performances. The details for the submission of new artistic proposals will be announced soon.

At the same time, one is being implemented unified cultural program for the Municipality of Athens. They are strengthened and opened in the city events already carried out while planned new from the whole range of arts (music, dance, theater, cinema, visual arts, architecture, book), while investing in modern tools and new technology for their organization and realization. Anniversary events for him celebration of the 200th anniversary of the Greek revolution, but also the immediate cultural program of the Municipality of Athens for the summer of 2021 compose the "puzzle" of the actions of the Municipality of Athens that will begin to be implemented as soon as the health conditions allow. 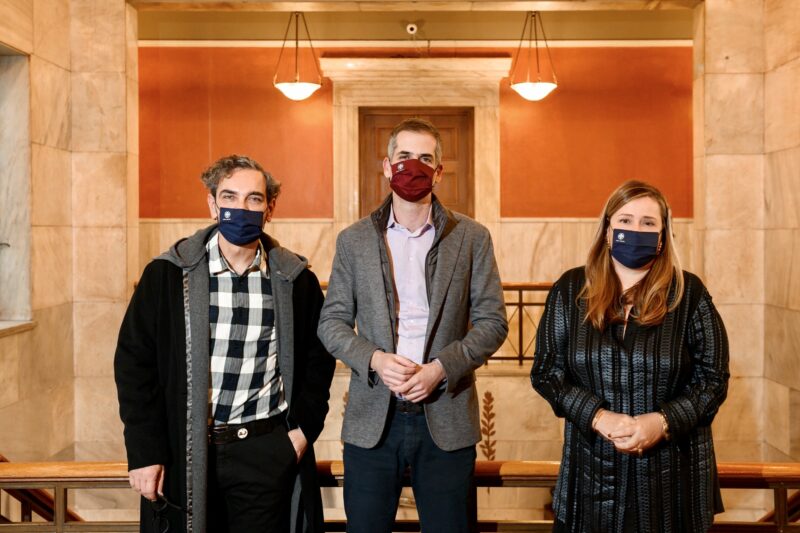 In the meantime, the infrastructure is upgraded and the building stock of the Municipality is highlighted. Historic buildings that until now were closed are reopening, new museums for the city are being created, collections are on display again adopting a modern approach compatible with the latest international trends.

The gallery, the libraries and the cultural spaces that are already functioning are evolving and being created new, open and fully accessible, cradles of culture inside in Athens. The project has already started to be implemented, with the first studies in progress, for example for the Museum "Maria Callas" in the neoclassical building at 44 Mitropoleos Street, for the building of EAT-ESA in Eleftherias Park with the aim of highlighting it park in a central cultural destination, but also for the house of Georgantis which is transformed into a place for the promotion of sculptural art.

Theatrical scenes of Athens come to life again, while pThe successful operation of OLYMPIA Municipal Musical Theater "Maria Callas" continues, the program of which is enriched with concerts, performances of lyric theater, dance and performances by distinguished artists from Greece and abroad.

They are also designed and implemented educational programs for all, children, teens, adults, schools & families in museums but also in the renewed cultural spaces, while the highly successful educational program continues "The child, the city & the monuments", which has been awarded a gold prize at Educational Leader Awards.

The culture of a city is found in the buildings, in the monuments, in its public space. Is located in theaters, music studios, dance schools, art workshops, in actions of creative interventions in the neighborhoods and streets of Athens. Is located in its great human capital. The Municipality of Athens is here, to embrace the artists, the workers in the field of culture, cultural institutions. It creates a field of networking and substantial interaction between them, turning Athens into a vast scene, a vehicle that allows the voices of the city to be heard.

Athens is located in center of the world cultural map as one fertile field of creative processes, a center of creative economy, a modern city for its inhabitants and visitors of from Greece and abroad. Athens stands out in capital of culture, creation, cooperation.

"Athens is going through its cultural restart through the implementation of a plan that is being implemented for the first time in the city. A program that invests in the people of culture, in our cultural capital and in its expansion. The goal, within the next three years, is to support employees in culture and to create those conditions that will give opportunities and space for new ideas but also new points of artistic expression in the city. We turn on the lights of culture in Athens again ", said the Mayor of Athens Costas Bakogiannis, on the occasion of the new program of culture for Athens. 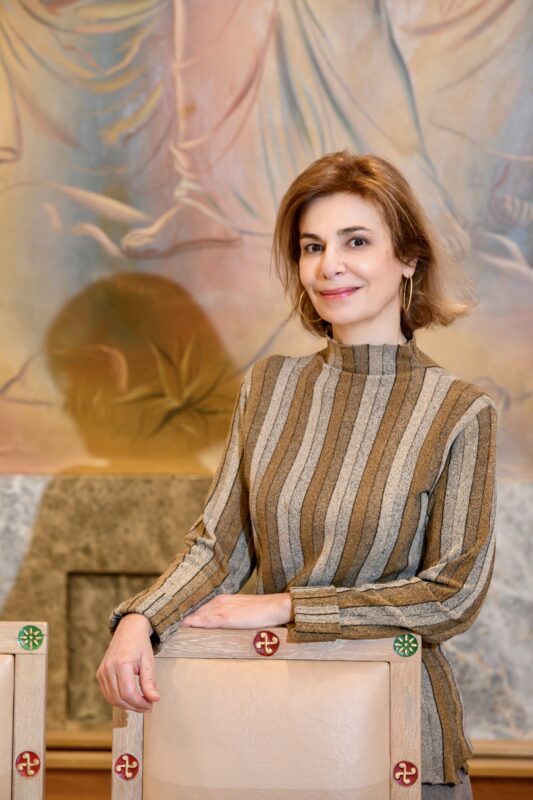 Katerina Koskina is a Doctor of Art History - museologist and curator of exhibitions. He was born in Corfu. He studied French Philology at the National and Kapodistrian University of Athens, History & Philosophy of Art at the Sorbonne and Museology at the Louvre School. He has a PhD in Art History. She has worked at the European Cultural Center of Delphi (1988-1992), at the Ioannou F. Costopoulos Foundation (1992-2014) as a curator and artistic director of the foundation and at Alpha Banking as an artistic advisor to the Management and curator of her art collection (1992-2014). From 2008 to January 2015, she was the Chairman of the Board of the State Museum of Contemporary Art and from 2011 to 2015, she was the director of 3th 4th and 5th  Biennial Of Contemporary Art of Thessaloniki. From December 2014 to December 2018, she was the director of the National Museum of Contemporary Art (EMST), while since 2020, she has been an advisor to the Mayor of Athens for culture. He has been a member of the Aesthetic Framework Committee of ATTICA METRO SA. (1998-2011), artistic consultant of the Organizing Committee of the Olympic Games - Athens 2004 SA (2000-2004) and its national commissioner 23th Biennial of Sao Paulo (1996), of 51th Biennialof Venice (2005) and 57th (2017). He has curated many solo and group art exhibitions in Greece and abroad and has written texts in books and exhibition catalogs, as well as articles in newspapers and art magazines. She is a member ICOMOf CIMAM and AICA Hellas. For her work she has been awarded the Cavaliere dell'Ordine della Stella d'Italia and the Chevalier dans l'Ordre national de la Legion d 'Honneur, respectively by the Italian and French Republics. 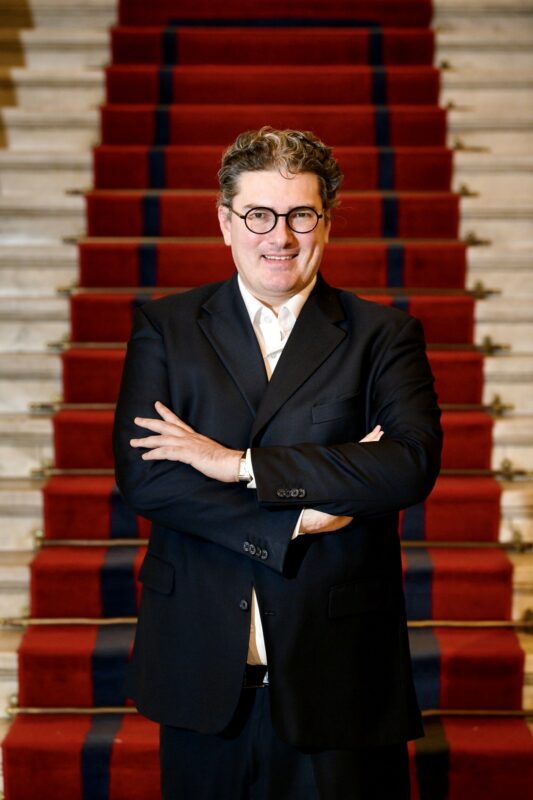 Olivier Descotes holds a Master's degree from the Sorbonne University (History) and the Paris Institute of Political Science (Public Administration), is a Knox Fellow at Trinity College (University of Cambridge) in Music History and, since 2006, has studied at the French Ministry of Culture. Having been an advisor to the Minister of Culture & Communication of the French Republic (2002) and the President & CEO of Vivendi Universal, he became a cultural attaché at the French Embassy in Italy (2005-2009), director of the French Institute of Milan (2009-2011) and, then, of Athens, while maintaining the capacity of advisor for Cooperation & Cultural Action of the Embassy of France in Greece (2011-2015). Appointed director of the Benaki Museum in 2016, while working at the Ministry of Culture & Sports of Greece as a special adviser to the Minister on issues of international relations and contemporary culture. Since January 2019, he has been the general director of the Rossini Opera Festival (Pesaro, Italy), one of the largest opera institutions in the world. He is a Knight of the Order of Letters and Arts and of the Order of Academic Phoenixes of the French Republic.

US diplomacy described the second round of the June 6 presidential election in Peru as "a model of democracy", despite ...
Read more
COVID-19:

The Mexican Ministry of Health announced yesterday Tuesday that in the previous 24 hours 261 patients with COVID-19 succumbed and 4.233 cases of ...
Read more
GREECE

Schools close in Thebes-Lamia-Livadia-Aliarto due to the heat

Schools are closed in many parts of the country, due to the heat, which will make its appearance more intense from today, Wednesday. As it became known, the ...
Read more
COVID-19:

The Brazilian Ministry of Health announced yesterday Tuesday that in the previous 24 hours 2.131 patients with COVID-19 succumbed and another 87.822 cases were confirmed ...
Read more
ECONOMY

Philip Lane (ECB): The resilience of the euro has improved thanks to its architectural reforms

The resilience of the euro has improved thanks to the reforms made in its architecture, but it is important not to be complacent as the agenda ...
Read more
ECONOMY

The 35-year-old man accused of raping a 50-year-old woman in Petralona was arrested.

The 35-year-old man accused of raping a 50-year-old woman in Petralona was recently arrested in New Philadelphia. According to information from police sources, the foreigner strongly resisted ...
Read more
IT HAPPENS IN ATHENS

The contract for Line 4 of the Athens Metro was signed

Another step towards the beginning of the works for the construction of line 4 of the Athens Metro was made on Tuesday night as ...
Read more
IT HAPPENS IN ATHENS

A march is currently taking place in Kato Petralona after a call by feminist collectives, for the complaint of a woman that she was raped in the area by ...
Read more
COVID-19:

Abolition of the mask for the vaccinated outdoors, many Athenians claim

The possibility of stopping the use of a mask outdoors for those vaccinated from mid-July onwards, is being considered by the committee of experts, ...
Read more