A Goth warrior in the center of Thessaloniki

The three-aisled cemetery Basilica, which came to light in 2010 as part of the Metro work at the Fountain, "hid" among many and important finds, a gothic warrior with his weapon, a find that is revealed for the first time in Thessaloniki and the wider region of Macedonia and which until now was only known bibliographically from other areas.

The early Christian basilica, almost throughout its southern aisle, is occupied by a cluster of tombs, most of which are vaulted. In one of them - which according to the pottery and the surrounding finds must be dated to the beginning of the 5th century AD - was found a skeleton of a man, next to which there were remains of weapons. The best surviving of his weapons was a sword which was found folded. Another manual and a shield navel were found. What seems to "unlock" the identity of the warrior, is that "the sword was deliberately folded, not broken", explains archaeologist Melina Paisidou to APE-MPE, who together with PhD candidate Errico Maniotis will present the study "Op soldier from the tomb of the basilica of the Fountain "at the 33rd Archaeological Conference for the excavations in Macedonia and Thrace (22-24 / 4). 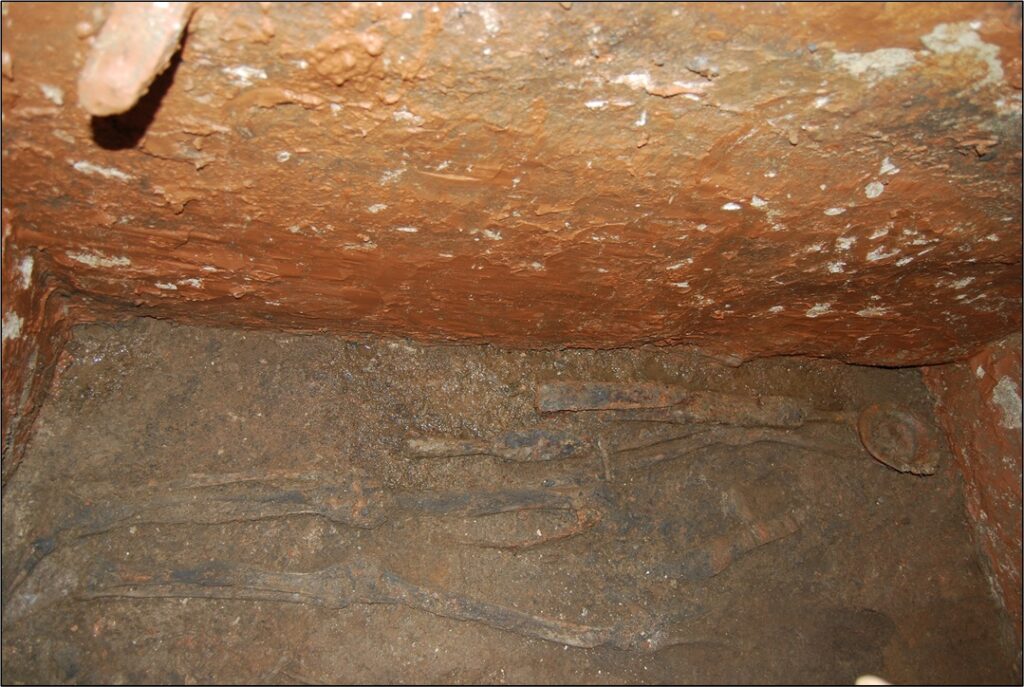 In 2010 archaeological excavations uncovered much of the city's eastern cemetery. Specifically, it brought to light about three thousand burial monuments which came to enrich our knowledge so far about the organization and continuous use of space from the Hellenistic period to Late antiquity. The tombs belong to various types, pit-shaped, box-shaped, inlays, altars, altar-shaped structures, vaulted single or twin.

The main element and the rarity of the find, which will be mentioned by Ms. Paisidou and Mr. Maniotis at the conference, is that there is this series of vaulted tombs inside a temple, ie that this Basilica was built in such a way that they included, so they were important people who belonged to the Christian religion. A special honor was also the fact that this warrior was buried with his weapons.

"It is rare for weapons of this period to be found in excavation contexts, even in Greece. "Most of the corresponding findings we have are from Balkan and Western European countries," explains Ms. Paisidou. It is probable that he was a gothic soldier, as Byzantium employed gothic mercenaries especially in the last decades of the 4th century onwards. They were experienced warriors and had a reputation for being good warriors. To this conclusion leads the type of armament found next to the soldier, as well as the folded sword, two elements that according to the archaeologist we knew until now only from Western Europe. "In Thessaloniki and in wider Macedonia, this sword diploma is encountered for the first time", emphasizes Ms. Paisidou.

OFI and AEK were called to apologize

AEK and OFI were called to apologize for the behavior of their fans in the matches with Panathinaikos and Olympiakos, respectively, by the disciplinary committee of ...
Read more