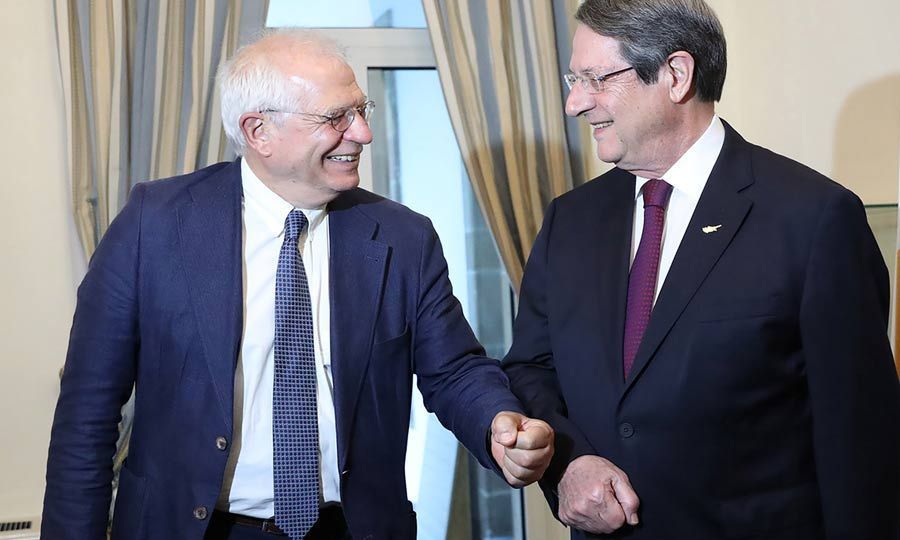 The High Representative of the Union for Foreign Affairs and Security Policy Josep Borrell, will be received at 10:30 at the Presidential Palace of Nicosia the President of the Republic of Cyprus Nikos Anastasiadis. At the center of the conversations Anastasiadis- Borel is the Cypriot and informal conference on Cyprus convened by the UN Secretary General Antonio Gutters.

The KThe special envoy of the UN Secretary General is expected in Cyprus on Sunday, March 7 Jane Hall Lut for meetings with the President Anastasiadis, and the Turkish Cypriot leader Ersin Tatar, to prepare for the informal conference. Her meeting with the President of the Republic is scheduled for Monday morning.

Mr. Anastasiadis will have first cat themselves meeting with Mr. Borel and extended talks will follow.

At 11:40 p.m. Υπατος EU envoy to visit Foreign Ministry, where he will be received by Cypriot Foreign Minister Nikos Christodoulidis. Will follow in itself meeting of the two men.

Except Informal Conference on the Cyprus issue scheduled for April 27-29, at agenda of conversations and contacts of Mr Borel in Nicosia is located  and  the European Council meeting on 25 and 25 March who will be occupied by Turkey.

The program of Mr. Borel includes a meeting with the Turkish Cypriot leader Ersin Tatar.

On the eve of his visit to Cyprus Josep Borel with statements in ΚΥΠΕ He emphasized that the solution was to ensure the integrity and decision-making capacity of the European Union. Shipping message to Anchor for Turkish negativity for EU participation in the Cyprus process, Mr. Borel write down that he is ο λόγος seeking engagement of all of parts in conversations.  Such a ο own as the ambassador of France Salina Grenet-Catalan were clear as to the form of the solution of the Cyprus problem, they took a position in its favor ΔΔΟ and against the two-state solution.

It is reminded that on Thursday night the President of the Republic, Nikos Anastasiadis, asked the German Chancellor, Angels Merkel to forward to the Turkish President, Recep Tagip Erdogan, the message that Turkey should stay away from challenges and avoid anything that could affect the status quo of Famagusta.

Germany: The number of ICU admissions determines the emergency brake

The president of the Federal Medical Association, Klaus Reinhard, called on the parliamentary groups of the parties to strengthen with more effective criteria, such as the number of ...
Read more
WORLD

The first EU supercomputer is launched by the European Commission, together with the Joint Undertaking for European High Performance Computing (EuroHPC) and ...
Read more
COVID-19

Turkey: Second in the world in new coronavirus cases - 1% of the population is infected

In Turkey, which comes second in the world after India in terms of the number of coronavirus cases, the recent increase in infections ...
Read more
PRESS RELEASES

G. Gerotziafas. If we start telling the world we are done with the virus, then we have destroyed our countries

The Minister of State and Digital Governance Kyriakos Pierrakakis was elected by the OECD as President of the Global Strategy Group. His election will be ratified formally by ...
Read more