A nearby, super-Earth hot rocky exoplanet suitable for studying its atmosphere has been discovered 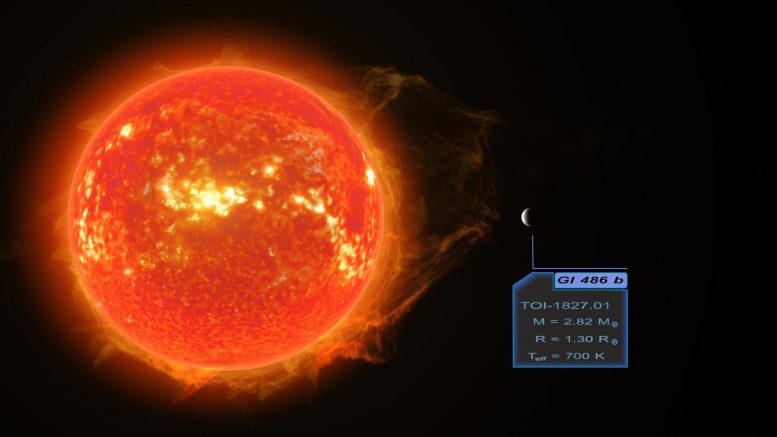 European astronomers have discovered the hot exoplanet Gliese 486b, a super-Earth around the nearby star Gliese 486, a red dwarf smaller and colder than the Sun, just 26,3 light-years from our planet.

The rocky exoplanet, the third closest ever found, is considered ideal, according to scientists, because of its proximity to the search for atmosphere in it, although due to its high temperature, the existence of friendly conditions for the development of life is unlikely.

Researchers from the Spanish-German consortium CARMENES, led by planetary scientist Tryphon Trifonov of the German Planck Institute for Astronomy in Heidelberg, made their observations with various surface and space telescopes and The DM XIXIX The XX; XOXOO O O O-DM; in the journal Science.

"Gliese 486b cannot be habitable, at least not in the way we know it here on Earth. "It is not hot enough to be a lava world alone, but its temperature makes it suitable for studying a possible atmosphere," Trifonov said.

Gliese 486b, perhaps, has retained some of its original atmosphere and on its dry surface there may be many volcanoes and some lava rivers flowing. The exoplanet is estimated to take only a day and a half to complete its orbit around its star (this is the length of its year), at a distance of 2,5 million kilometers from it.

It is almost 30% larger than the Earth, as its radius is about 1,3 times larger, while its mass is almost three times (2,8 times larger). Its surface temperature is around 430 degrees Celsius, slightly lower than Venus, while a human on its surface would feel a gravity 70% stronger than the earth.

"If the planet were 100 degrees hotter, its entire surface would be lava. "Its atmosphere would consist of gassed rocks," said astrophysicist Jose Caballero of the Spanish Center for Astrobiology.

Over the past two and a half decades, astronomers have discovered more than 4.300 exoplanets, both rocky and non-rocky, few of which have similarities to Earth. The big challenge for "terrestrial" exoplanets is the chemical analysis of a possible atmosphere, something that is expected to be possible with NASA's James Webb Space Telescope being launched this year and the future Ultra Large EL Telescope under construction. ) in Chile.

"Studying the atmosphere of Gliese 486b" could turn it into the "Rosetta Column" of extraterrestrials, at least for Earth-like planets, "said Caballero, referring to the discovery in 1799 of an inscription that helped archaeologists translate Egyptian hieroglyphics for the first time.

"Once the James Webb telescope is up and running, we plan to observe the Gliese 486b. "We are optimistic that in about two and a half to three years we can know whether this planet has an atmosphere or not and, if so, what its composition is," Trifonov said.

The "experiment of Rhodes" and the big bet

The German-language press focuses on the efforts to open Greek tourism. Also in the press are the flights of asylum seekers to Germany and the ...
Read more
WORLD

The Czech Republic has deported 18 Russian diplomats accused of espionage. The Czech intelligence services have identified 18 members as agents of the Moscow espionage services ...
Read more