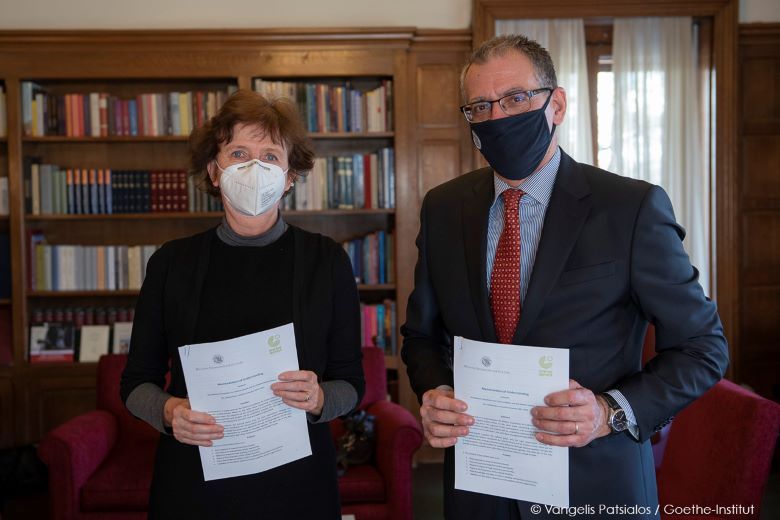 The Hellenic Cultural Foundation and the Goethe-Institut Athens signed a Cooperation Agreement opening a new chapter of cultural exchanges.

The signing of the Cooperation Agreement came after a series of discussions between the two bodies that started in the fall of 2020, with the aim of strengthening and expanding their long-term good cooperation. The main goal, as set by the two interlocutors, is the expansion of the EIP-GAITE cooperation on a stable and continuous basis during the year, maintaining of course the ad hoc collaborations e.g. Thessaloniki International Book Fair.

German literature will be honored at the next 18th edition of the Thessaloniki International Book Fair. Both the success of the German translation program Litrix, which was extended until the end of 2021 while 26 books have already been purchased by Greek publishers, and the successful series of six professional seminars "Let's talk" (November 2020) with more than 800 entries, have to form a suitable ground for exploring the possibilities of implementing reciprocal programs that will enrich the Greek-German literary and wider cultural exchanges.

It is noted that a new series of seminars on the Art of Translation, inaugurates this official collaboration. The first event entitled "Literary Translation: Exercises and Limits of Freedom" was held online with the participation of more than 150 interested people, who attended the experienced translators: Marina Agathangelidou, Birgit Hildebrand, and Despina Kanellopoulia and translators of literature, both in the process of assigning a translation and in the linguistic confrontation with a text. This program will continue during the year while the cooperation of the two bodies will be enriched with new actions that are planned.

Following the consultation of the Prime Minister, Kyriakos Mitsotakis with the Minister of Health, Vassilis Kikilias, vaccinations will take place on Good Friday, Holy Saturday and ...
Read more
SPORT CITY

Prime Minister Kyriakos Mitsotakis announced five tax and insurance reliefs for employees and companies during a government meeting via teleconference on ...
Read more