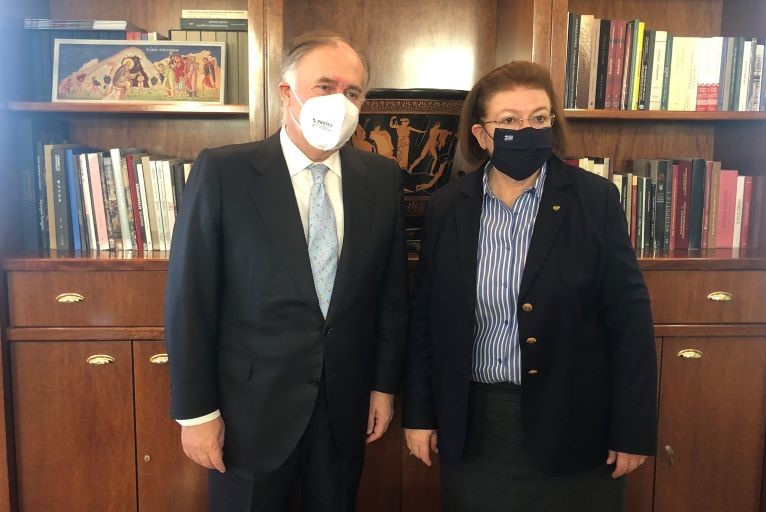 The Minister of Culture and Sports, Lina Mendoni, received today at the Ministry of Culture, the Ambassador of Spain, Enrique Viguera, in order to discuss issues of cultural cooperation between the two countries.

Ms Mendoni briefed Mr Viguera on the plan to restore and renovate the former royal estate of Tatoi, which the Spanish ambassador said was an issue of great interest to Spanish society due to Queen Sophia's Greek origin. As Ms. Mendoni said, "the majority of the Greek people believe that the period of the Kingdom is a part of our recent history and therefore, we must highlight this history. The state issue has been finally resolved. "Nobody disputes anything and people love the former royal estate."

According to Mr. Viguera, a film project of Spanish production is in progress, for the portraits of two important personalities of Greek origin, Juan de Fuca (Ioannis Fokas) and Francisco Albo (Francis Albos) from Chios, who were important seafarers. The former explored the coast of Canada, while the latter participated in Magellan's crew and the first Earth voyage. A program is also being planned to promote the unknown Spanish supporters of the Greek Revolutionary Struggle.

Ms Mendoni and Mr Viguera also discussed co-organizing exhibitions, physical or digital. Ms. Mendoni noted that "In our program there was a joint initiative between the National Archaeological Museum and the Archaeological Museum of Madrid. Unfortunately the pandemic did not allow us to move on, but it is something we really want. I hope that with the vaccination, from September 2021 we will be able to feel more free, so that we can restart all our actions and activities ".

The Prime Minister of Denmark apologized today, after the amateur lens recorded her not wearing a mask in a store, unlike ...
Read more
984

Weather: Heavy rains and thunderstorms on Sunday - Which areas will be affected

On Sunday, locally heavy rains and thunderstorms with the possibility of hail are expected in the eastern parts of Crete and the Dodecanese, with a gradual improvement from ...
Read more