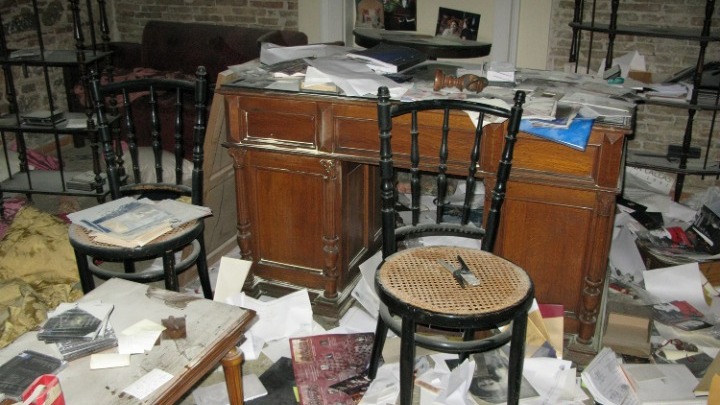 Yesterday, the Minister of Culture and Sports Lina Mendoni met with the President of the "International Art Center Athenaeum" Anna Koukouraki. Ms. Koukouraki presented to Ms. Mendoni in detail the great damage suffered by strangers to the building at 3 Adrianou Street, which houses the Conservatory and the International Art Center Athenaeum. Unknown perpetrators looted the Center and destroyed musical instruments and equipment, as reported by the organization's administration on January 20th.

The Athenaeum was founded in 1974. It was originally housed in a neoclassical building on America Street, while in September 1998 it was moved to 3 Adrianou Street, in a 19th century listed building. The Athenaeum International Art Center established the "Maria Callas" music competition in 1977.

Ms. Mendoni informed Ms. Koukouraki that the Ministry of Culture will immediately proceed with the extraordinary support of the Association "International Art Center Athenaeum" so that the damaged musical instruments and other equipment can be replaced as soon as possible, in order to make it possible to restore it.

The Minister of Culture and Sports Lina Mendoni stated:

"The work of the Athenaeum International Art Center, which bears the stamp of the late chief musician Loulis Psychoulis and is continued by Anna Koukouraki, is extremely important. The Athenaeum brought together personalities of music and culture and has played a key role in music education. His international activity with the Grand Prix Maria Callas, as well as his educational work have contributed greatly to the musical life of the country. The destruction of the building and the equipment of the conservatory is a blow to the culture and the great history of the Athenaeum. We must honor and protect this history, ensuring the conditions for its reopening ".

As stated by the Deputy Minister of Culture and Sports Nikolas Giatromanolakis:

"What happened at the Athenaeum can not leave anyone unmoved. In addition to the very serious material damage suffered by the Conservatory and the heartbreaking image that I saw during my visit, the Conservatory also lost historical archives, musical instruments and works of art that are unfortunately irreplaceable. We pledge to stand by the Athenaeum and to actively support the efforts of the people of the Conservatory to heal these deep wounds. "

For her part, the President of the Athenaeum International Art Center Anna Koukouraki noted:

"Thank you very much for the meeting with the Minister. I am excited because the 45-year-old work has left a mark on the musical life of our place and society. I express my satisfaction and gratitude for the fact that our request was answered immediately and with the support of the Ministry of Culture and Sports, the Athenaeum Conservatory will be able to start operating again ".

Christos Thivaios: We try to stand up and show height

Christos Thivaios, takes the baton in the online concerts organized by Stavros tou Notou and invites us to sing with him - from security ...
Read more
WORLD

A Democratic lawmaker is suing Trump for invading the Capitol

A Democratic MP has filed a lawsuit against Donald Trump, Rudy Giuliani's lawyer and other associates of the former president, demanding compensation for ...
Read more
984

Live information on the evolution of the pandemic

The briefing of the accredited authors at the Ministry of Health is underway by the Deputy Minister of Civil Protection and Crisis Management Nikos Hardalia and Professor ...
Read more
SPORT CITY

Bouchalakis: "That's how I got the inspiration for the goal"

Andreas Bouchalakis scored a brilliant goal in the game with Aris at "Kleanthis Vikelidis". He managed to catch Cuesta asleep and with ...
Read more
WORLD

US: Sanctions on Ukrainian Igor Kolomoisky for corruption

The United States has imposed sanctions on former Ukrainian official Igor Kolomoisky for his involvement in corruption, the American said today in a statement ...
Read more
COVID-19

The Canadian health authorities have given the green light for the use of the vaccine of the American pharmaceutical company Johnson & Johnson for Covid-19. It's about...
Read more
COVID-19

France: Vaccinated seniors will be able to leave nursing homes

The French government will allow the vaccinated elderly to leave the nursing homes, while 80% of them have ...
Read more

By order of the Police, the "Syntagma" Metro station remains closed from 16:30. Isidore Roussos
Read more
IT HAPPENS IN ATHENS

Students gather in the Propylaea, demanding that the law of the Ministry of Education on higher education not be implemented. Victor Antonopoulos
Read more