Online the Night of Ideas from the French Institute 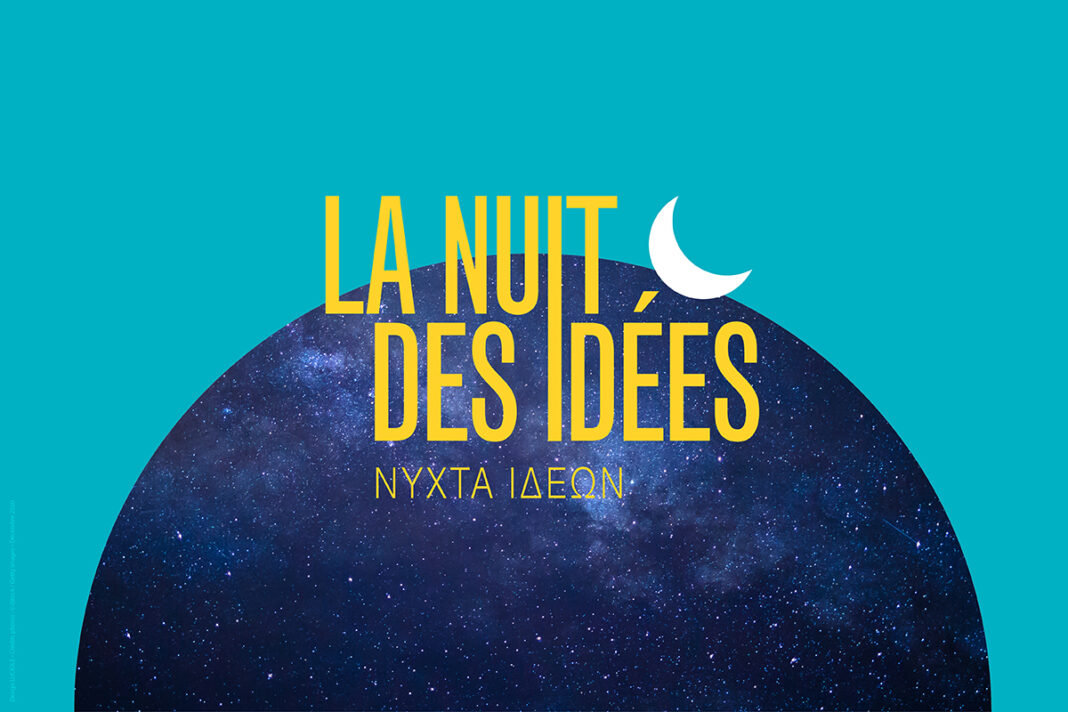 Close: to ourselves, to our own, to others

Online event at www.ifg.gr and Social Networks of the French Institute of Greece

The French Institute of Greece organizes the 8th event of the Night of Ideas and the special night that will take place on Thursday, January 28, 2021 around the theme "Near".

Is the neighbor always… farther away? Even though economic globalization has pushed many boundaries and the digital revolution has created countless opportunities for meeting and exchanging, the feeling of alienation or even a broad reconstitution extending from the immediate personal environment - love, couple, family - to the wider friend. professional and social environment, as well as in relations between States, seems inevitable.

For the first time this year, the Night of Ideas is giving way to testimonies from neighboring countries. This approach is based on the assumption that, in addition to the peculiarities, differences or even individual conflicts, which often characterize the "near stranger", the form of diversity that is the impenetrable horizon of our actions, there are also common concerns and fertile ground for dialogue and the search for convergences within and between social groups.

This year's Ideas Night event is unprecedented. At a time when the majority of States and peoples are confronted with the restrictions of a ban or a traffic ban, it invites us to reflect on the nature of our relationships with our fellow human beings.. Despite the stress caused by the pandemic, despite the isolation it imposes, the fear of the other that it causes, it is perhaps at the same time a unique opportunity to restore the fragile, fraternal, friendly, political ties, which beyond individualism, peculiarities, redemption, we know that they are necessary to face together the future of the human species and our planet.

The evening is coordinated and presented by the author, creator of radio art and culture documentaries and journalist, George Archimandrite.

We make an appointment on the website of the French Institute of Greece from 18.00 ′ to listen to those who contribute to the advancement of ideas, and to share, throughout the night, personal testimonies and artistic events.

Generation Covid? Young people face limitations in their desires, representations and prospects. Challenges and expectations of a generation. Prohibition and traffic ban upset relationships in the socio-emotional environment. Weakening of interpersonal relationships and prospects for vocational rehabilitation. Families in confinement faced with isolation in small spaces.

In the geopolitical and cultural context of the Eastern Mediterranean, the French Institutes of Greece and Turkey have chosen to invite young people from Greece to a dialogue, via live teleconference (live broadcast throughout the international network of French Institutes), lasting 45 minutes. Turkey, to share their personal experiences from the prohibition, their hopes, their commitments, their love, their expectations and their vision for the world of tomorrow. This discussion, which will be moderated by a journalist, is part of the broader program of the Night of Ideas and is part of the bilateral dialogues that take place around the world.

18.50 : Urban tour with the author Christos Chrysopoulos and Patrick COMOY, educational advisor and Director of the French Institute of Greece.

19.00: Meeting with Bruno PATINO, Chairman of the Board of Arte and Rector of the School of Journalism Sciences Po Paris.

The discussion is moderated by George Archimandrite, focusing on the issues of the digital world and the impact of digital media on human relationships with the environment.

19.50 : Meeting with the protagonist of "The double life of Veronica", Irène JACOB and coordinator George Archimandrite. The actress will read excerpts from her book "Bing Bang".

With the support of the Embassy of Greece in France

Men and women, destined for love, friendship, coexistence in the family, social and professional environment. Such a close by nature, but so alienated from a cultural edifice lost in the depths of the centuries, which defines the superiority of the male sex as the foundation of the bourgeois, political, economic, social, moral and religious order. A trap of an established model that consolidates women's inferiority and traps men in the model of masculinity characterized by power, competition and heterosexuality.

Return to the production, from a very young age, of gender stereotypes and traditional gender roles. The urge for strength and high performance secures the prestige of masculinity. As the #MeToo movement brings to the fore the issue of seduction, consent and sexual violence, the man is confronted with the privileges and contradictions of his gender, having previously led the fight for freedom and rights, but failing to do so. those that undermine his supremacy.

How does the movement for the emancipation of women contribute to the change of representations, both in the emotional field and in the social change of the family (enlarged, nuclear, single-parent, adoptive, homosexual)? How does the struggle for equal rights and the removal of gender stereotypes contribute to changing parental patterns? Are other male role models compatible with women's rights possible? Is a further convergence of male and female possible?

Olivia GAZALE, professor of philosophy, co-founder of the Mardis de la philo program. Author of The Myth of Virility: A Piece for Both Sexes (Robert Laffont, 2017).

Alexandre LACROIX, author, philosopher, journalist and editor of Philosophie magazine, author of the autobiographical novel The birth of a father.

Theofano PAPAZISI, Emeritus Professor of Law, Aristotle University of Thessaloniki, member of the drafting committee of the cohabitation agreement for Greece.

21.45: Meeting with Barbara CASSIN, philosopher, Hellenist, member of the Académie Française. The discussion is moderated by George Archimandrite.

With the support of the Embassy of Greece in France

The health crisis has radically, and possibly irreversibly, changed social relations. Everywhere, gestures of solidarity and mutual aid, but also the realization of a threat that targets the most vulnerable groups. Somewhere, brave decisions to support those affected by the coronavirus crisis. Elsewhere, introversion, individual, group or national selfishness. This crisis calls into question the models of production and distribution of wealth, traditional perceptions, forms of coexistence, and even our own personal consciousness.

"Stay home" or "We stay home", this call for home confinement, defines our daily lives according to the course of the pandemic. By definition, social "distancing" raises social and even psychological walls. What would happen if, on the occasion of the health emergency, the precautionary principle was transformed into a suspicious principle? How does this crisis contribute to the devaluation of public discourse? Fake news and simplifications, undermining of expertise, limiting the conditions of dialogue in public… When health conditions and safety issues overturn the rules and behaviors in matters of freedoms.

Vassilis KARAPOSTOLIS, Professor of Philosophy of Communication and Culture, University of Athens.

During the night Selected episodes of the series will be shown « 50 nuances de Greeks "(ART) of Jul (Berjeaut), cartoonist and comic book creator, such as Lucky Luke.

About the Night of Ideas

Idea Night, an initiative of the global network of French Institutes set up to celebrate the flow of ideas and knowledge between countries, is both an invitation to the exchange and discovery of knowledge. This cultural event encourages exchanges in all fields of knowledge, in an accessible and festive way, and in contemporary topics that are approached simultaneously, in the light of philosophical thought, scientific knowledge, artistic practices and literary experiences.

The event is organized in collaboration with Institute français (Paris).

More information and the full program will be posted shortly at  www.ifg.gr