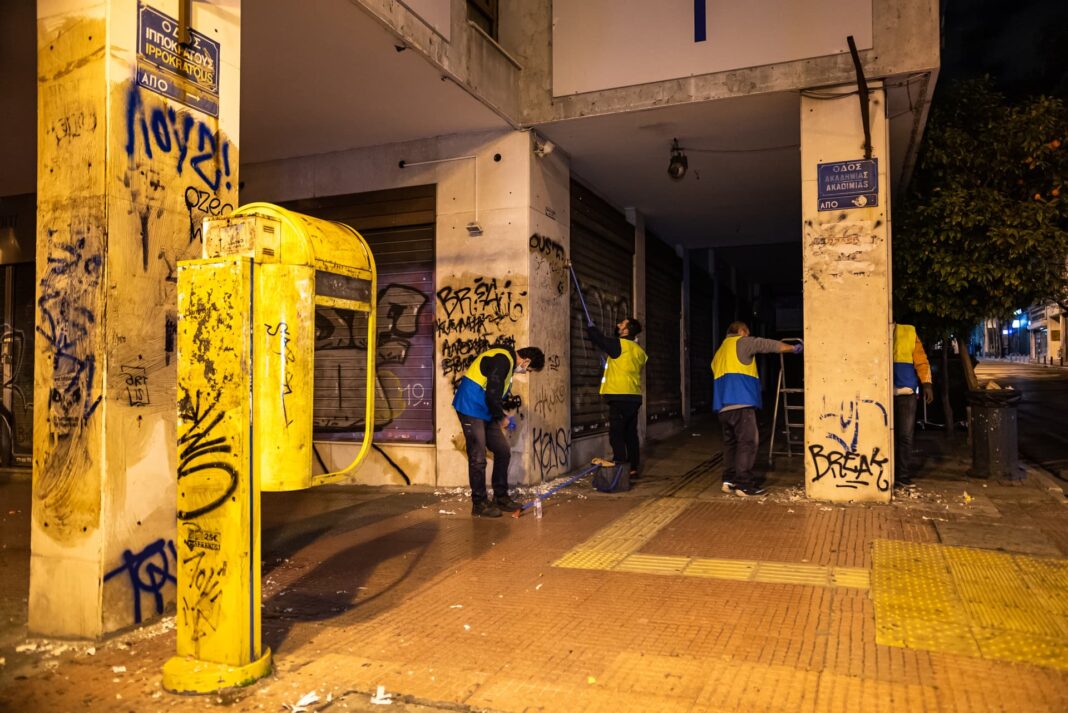 The sweeping operation of cleaning the large surfaces of the Academy, completes the first cycle of 40 such interventions that are made for the first time in Athens.

For decades, the main streets of Athens, but also many of its corners, had been handed over to smudges and anarchic graffiti. Over the years, artistic expression and creation in public spaces, became "entangled" with any form of mark on the walls and large surfaces.

Athens turned into a field of anarchic graffiti, without control and without consequences. Conditions that were even used by "visitors" of other countries, where strict restrictions were applied for those who wanted to do graffiti. Result; Kilometers of surfaces, covered by unsightly designs that did nothing more than hide the city.

Picturesque corners of Athens, monuments, statues, shop facades, parks, "drowned" by the paint and slogans and the color of emblematic places of the city, was replaced by misery and black.

In this situation, Athens had to give an answer. By cleaning and implementing a plan that will organize the interventions on the surfaces of public spaces. Thus, the Municipality of Athens, in the first phase, started a barrage of companies to clean all these surfaces.

To date, there have been 40 anti-graffiti companies. About 19.000 sq.m. have been cleaned. Stone, marble and glass surfaces, metal fences, shop shutters and columns, have been given to the city clean, after the effort of the cleaning team and the important contribution of the program "Adopt your city", in which organizations and companies participated.

They are interventions that have been made in places that have been connected with the History and the culture of Athens, but also with its daily life. Surfaces were cleaned in Anafiotika, in a very large part of Patission, in Ermou, in Thiseio, in Stadiou but also in dozens of places in the neighborhoods. The most recent, which was completed a few days ago, took place at the Academy. A company that restored its surfaces, clean and bright. In the Academy, as in all areas where business is done, a special anti-graffiti coating is applied, so that in the future it is easy to remove the paint.

At the same time, an organized effort was launched to allocate spaces so that groups of artists could create works that turned "indifferent" points into paintings. Cafes, walls, large surfaces, now host works by people who want to combine creation with the light of the city.

In the same strategy, the new cleaning regulation is moving, which will soon be put to consultation and provides for fines for those who continue to violate the right of Athenians and visitors to the city to enjoy it clean.

They are fines against graffiti in archeological sites, monuments, statues, public and municipal buildings, in urban equipment but also against poster pollution and advertising stickers on the walls and columns of Athens.

These are the axes of the plan, as analyzed by the Mayor of Athens, Costas Bakogiannis, with the aim of "Revealing the real Athens under the smudge".

"Cleaning, places of creation, effects. With this triptych, our strategy has begun to spread throughout Athens. On the one hand, to reveal the true picture of the city and on the other hand, to send a message that says that the right of Athenians to live in a clean neighborhood is inalienable, is respect for their quality of life. What matters now is to stick to these big cleaning companies, to erase all this misery from our daily lives. And this is what we do "adds Mr. Bakoyannis.

Andre Vierinia signed the extension of his contract with PAOK for an additional year and will wear the team's jersey at least ...
Read more
COVID-19

In the areas affected by the earthquake on Saturday, Al. Tsipras

The president of SYRIZA-Progressive Alliance, Alexis Tsipras, will visit the areas affected by the earthquake tomorrow, Saturday, March 6.
Read more
984

China: WHO SARS-CoV-2 origin report to be released around mid-March

The findings of the mission of the World Health Organization in the city of Wuhan, China, which sought the origin of the coronavirus SARS-CoV-2, are expected to be announced ...
Read more
COVID-19

Nigeria, Kenya and Rwanda today began vaccinating the health and vulnerable groups of the population for Covid-19, as ...
Read more
COVID-19

The Russian Sputnik-V vaccine, the second most popular coronavirus vaccine in the world in terms of the number of approvals

The Russian vaccine Sputnik-V against coronavirus holds the second place among the vaccines as the number of approvals for emergency use in which ...
Read more
COVID-19

During his short visit to Vienna, Kirill Dmitriev, the head of the Russian Direct Investment Fund responsible for the promotion of the Russian vaccine ...
Read more