Last spring, since the beginning of the new coronavirus pandemic, diANEOsis launched an effort to record the perceptions and views of Greeks during the unprecedented phenomenon and the greatest crisis in the recent history of our country, publishing a series of public opinion polls. .

In April 2020 recorded how the Greeks live in quarantine. Our country escaped the dramatic consequences of the "first wave" that swept many European and other developed countries but, after the summer, began to face serious problems with the much more intense "second wave". The search was repeated September 2020 , at a time when the country was not in lockdown but began to record increasing numbers of cases.

Two important things have changed since September: First, the country has entered a second lockdown, following the launch of cases, ICU and deaths to unprecedented levels. Second, major pharmaceutical companies began announcing the results of the third phase of their vaccine trials in early November. Today, as the expected start of the vaccination process in Europe in the near future indicates a possible way out of the crisis, a whole new situation is emerging again. Thus, diANEOsis conducted a third investigation in its first ten days December to capture the attitudes and views of the Greeks at this time.

In mid-September 2020, 42% of Greeks stated that they did not intend to get the coronavirus vaccine when it is approved by the competent European and national bodies, and it becomes available for free (sum of the answers "definitely not" and "probably no ”in the relevant question). It was a large percentage, which was widely reproduced in the media and raised reasonable questions and concerns among experts. Less than three months later, however, the situation is quite different. That 42% in mid-September has now become 27,4%. Today, two out of three Greeks (66,3%) say they will get the vaccine (sum of 'definitely yes' and 'probably yes'). 1 in 3, in fact, answer emphatically "definitely yes". 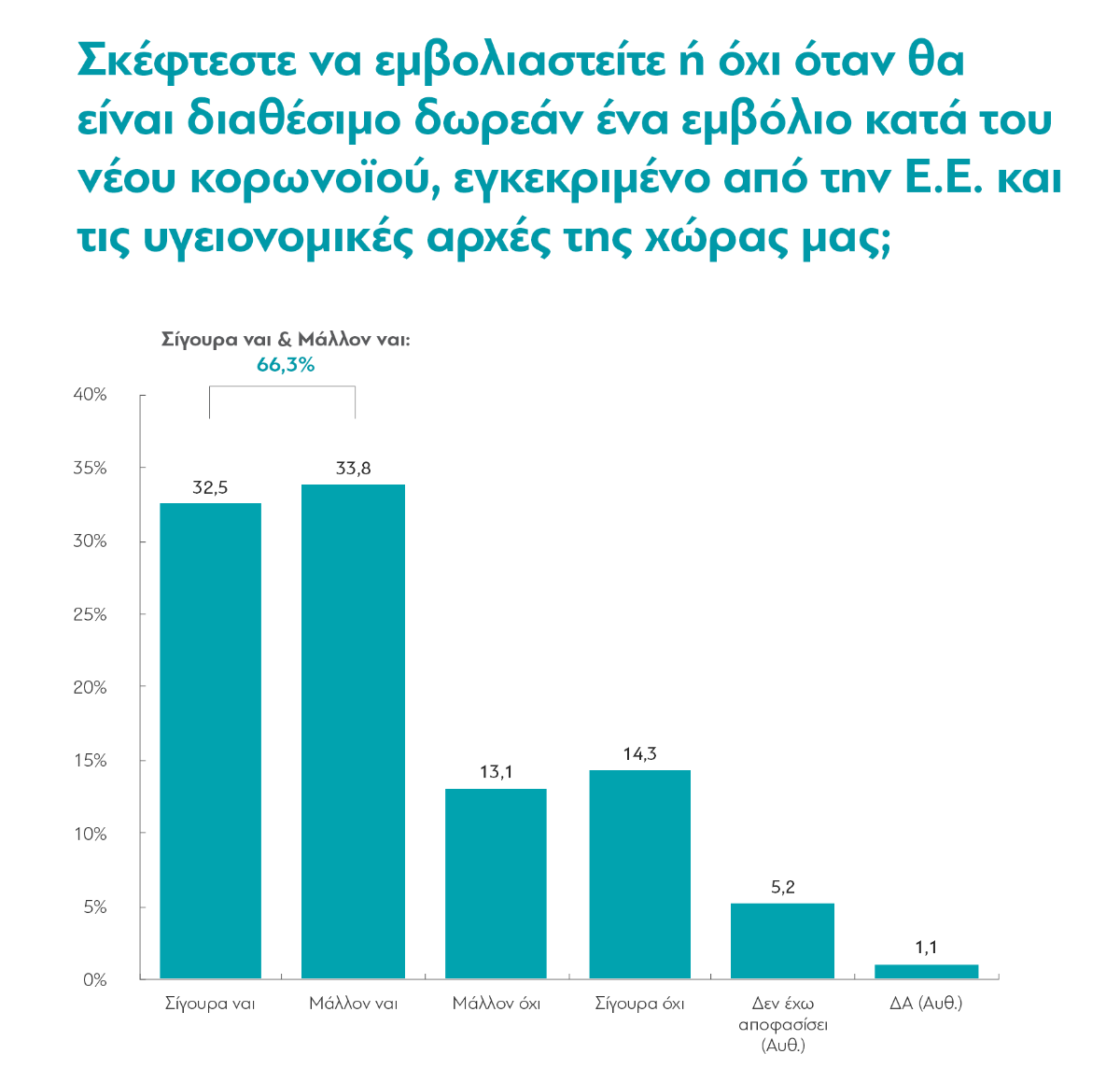 How did the opinion of a large part of the population change so quickly? On the one hand, the December investigation took place at a time when in Greece we had steadily thousands of cases, about 600 Greeks in the ICU and about 100 deaths from Covid-19 every day, so the health risk was much more pronounced and obvious. Most importantly, in early November, major pharmaceutical companies announced that the vaccines they were developing had successfully completed the third phase of testing on tens of thousands of volunteers, with far better results than expected.

Besides, as can be seen from the results of September, and it is confirmed even now, in Greece there does not seem to be a strong movement of anti-vaccine or anti-virus. The vast majority of Greeks have very positive views about vaccines in general. To the question "do you agree or disagree with the view that vaccines save lives" 94% of respondents agree. In fact, 61% agree "absolutely". 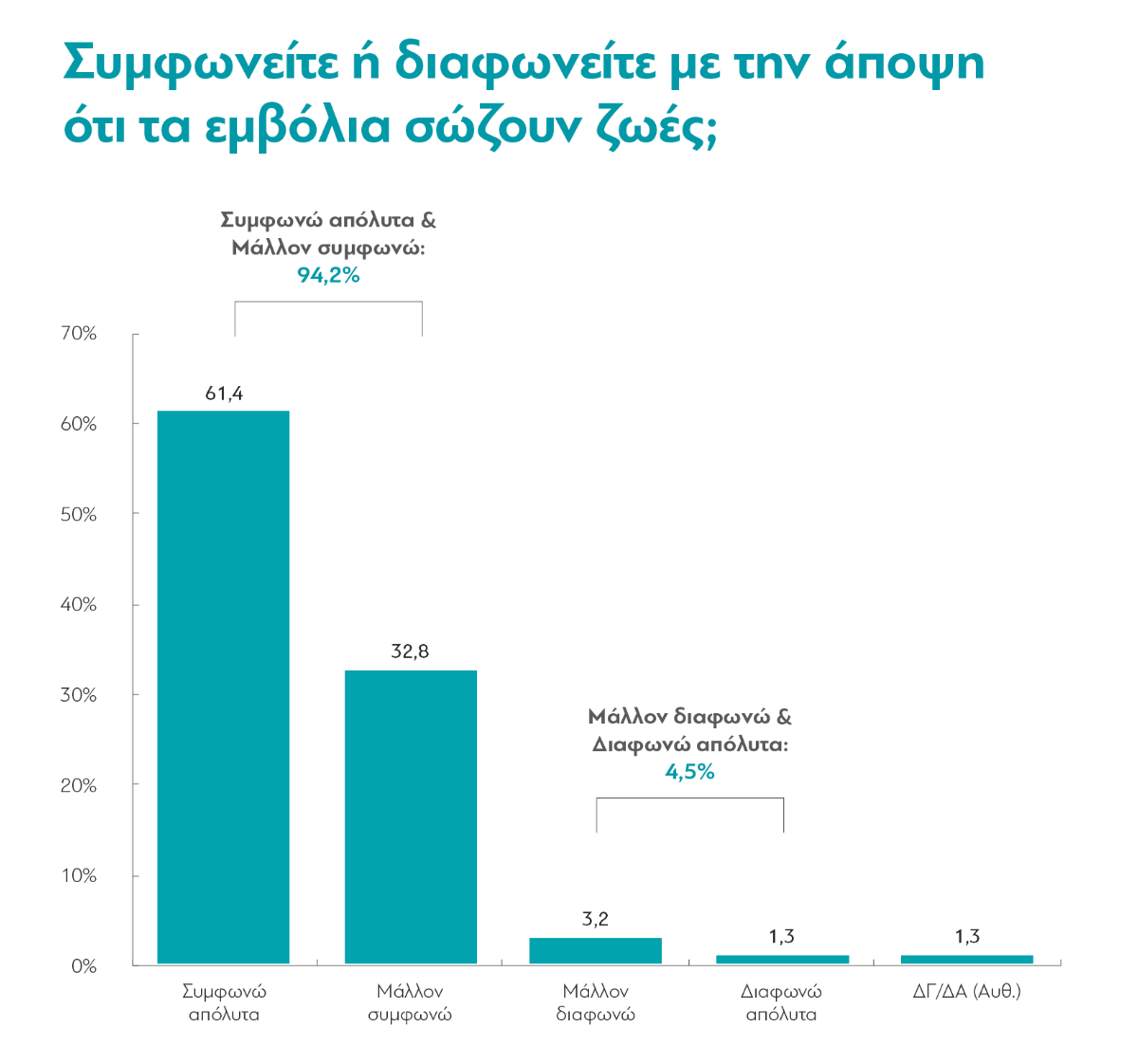 Of the approximately 27% who say they (certainly or not) will not get the vaccine, the main reason they cite is very different: "it may not be safe, or it may have side effects." The percentage of citizens who say "there is no virus" or "I do not trust vaccines" to this question is very low. As Stratos Fanaras, CEO of Metron Analysis, points out, "there are very few who actually challenge the supply of vaccines to public health and the so-called 'anti-vaccination movement' is limited to epidemiological terms." But if the information of the citizens is not honest, transparent and understandable, it can speculate on ignorance and become a measurable force ". 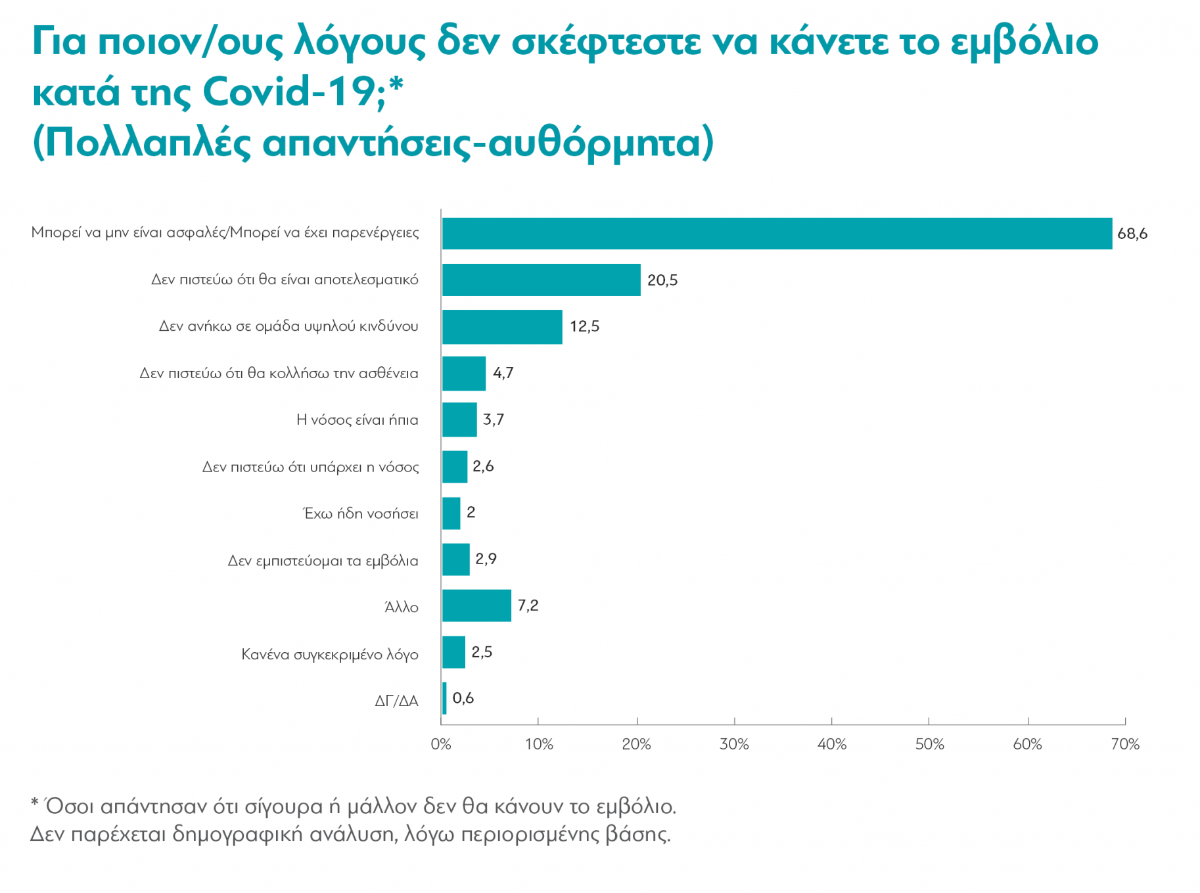 However, it is a fact that, although many Greeks have already made the decision to get the vaccine - one in four who would (probably or certainly) say they would have done it "among the first" - a large percentage of citizens have still reservations and hesitations. About half of those who say they intend to get the vaccine would like to discuss it more with doctors or relatives first. 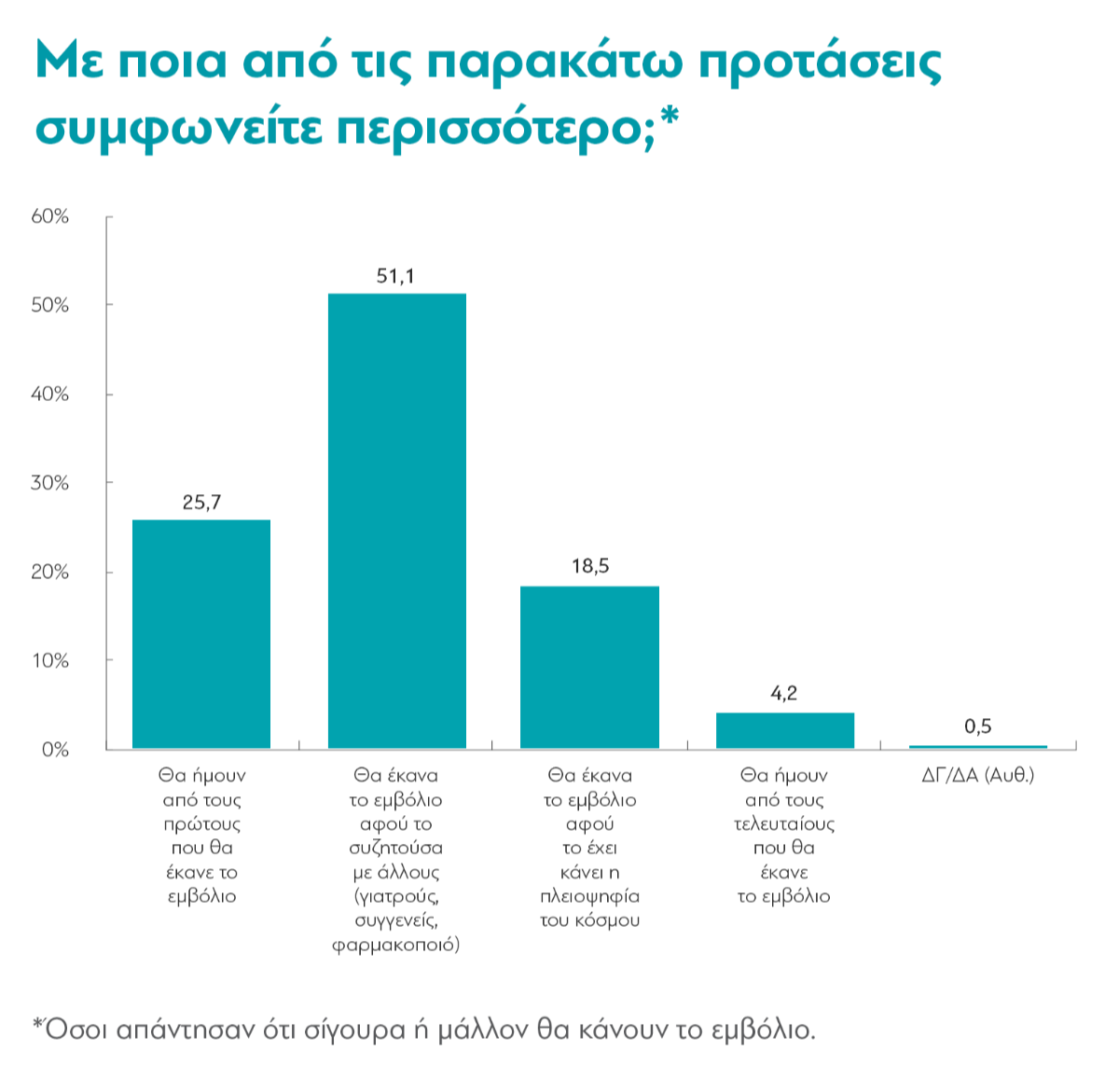 Something extremely interesting, too, which is indicative of the climate in society: 40,9% of respondents say they have been vaccinated against the flu this year, a much higher percentage than usual. Indeed, this year the demand for the flu vaccine is much higher and may reach up to 1 million more doses than last year. In fact, 8 out of 10 respondents over the age of 65 say they have had the flu vaccine. 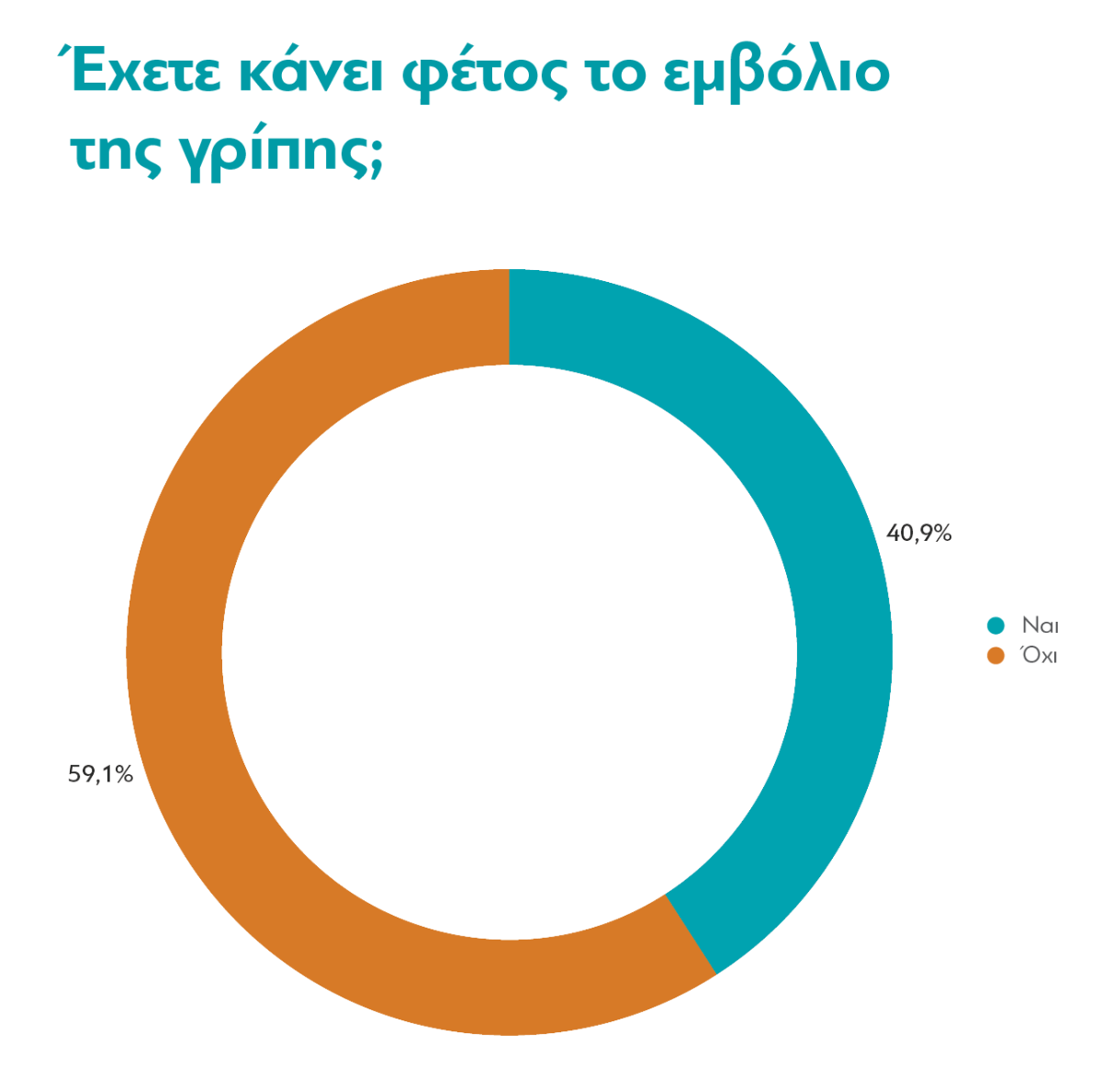 As expected, of those who say they have been vaccinated against the flu, 84,1% say they will get the coronavirus vaccine.

It is noteworthy that the majority of citizens believe that the vaccine will be available in our country "in the first quarter of 2021".

On the other hand, it seems that even after ten months of pandemic and crisis, Greeks still believe that in our country in general "things are going in the right direction". Although the percentage has dropped significantly from the historic high of 86% last April, it has not changed much since September (54% vs. 57% in September). As we mentioned in September, it is interesting that this attitude is unusual. Metron Analysis asks this question regularly, every month in its surveys since 2014 and with few exceptions the Greeks have always traditionally considered that things are not going well. Throughout the pandemic, however, majority believe that our country is heading in the right direction.

Moreover, in the midst of lockdown and the peak of the "second wave", the percentage of Greeks who believe that "the worst is over" increased to 39%, compared to 19% last September. The majority, however (47%, up from 73% in September) still believe that "harder days are coming". 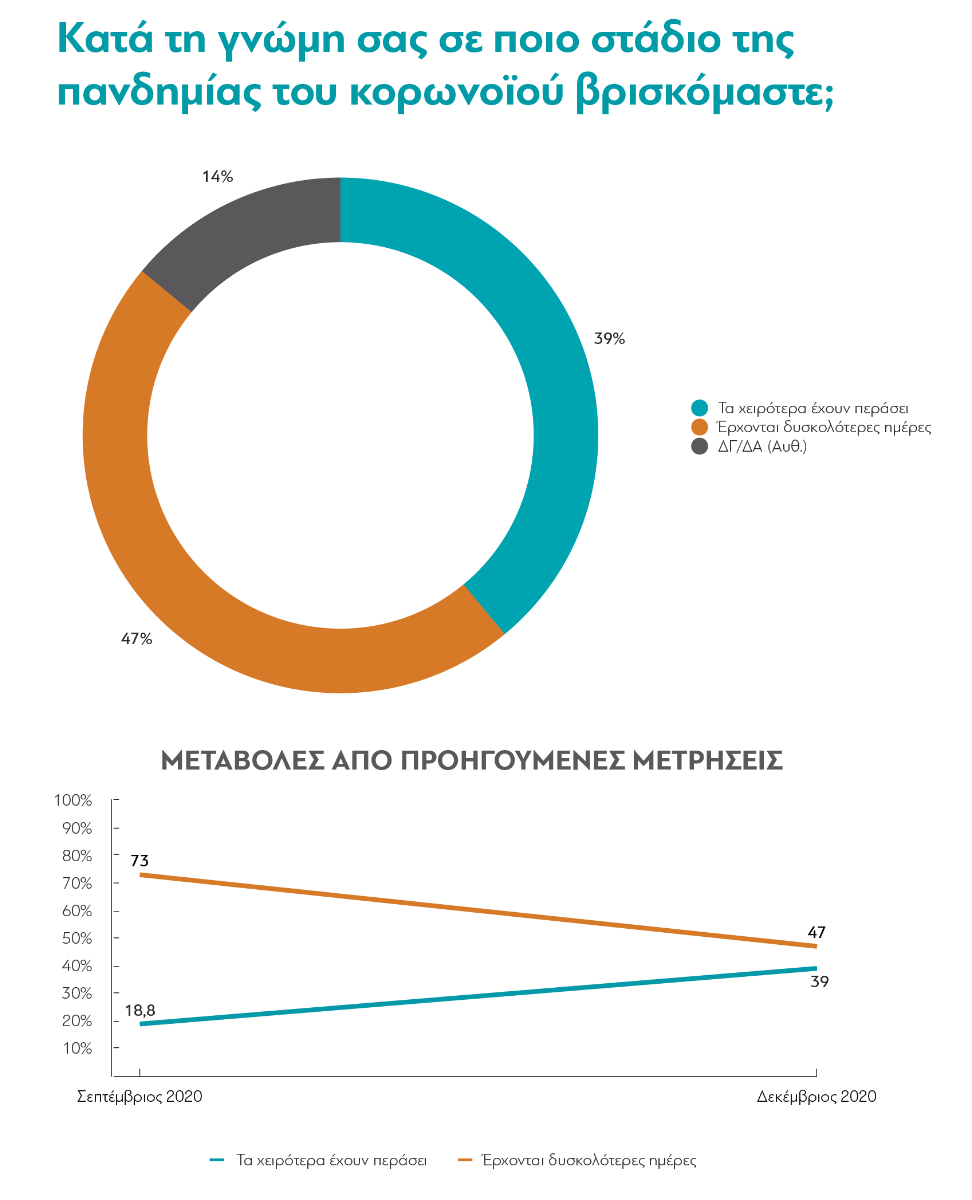 And this time it is confirmed that the pandemic has completely changed the way we live. 65,1% say that their lives have changed "a lot" or "too much" - and the percentage reaches 88% if we add the "enough" (from 73% in September). All ages, all social classes and all sections of the population agree - with the exception of a remarkable 23,8% of those who claim to be farmers, who answer that their life in the pandemic has not changed "at all". 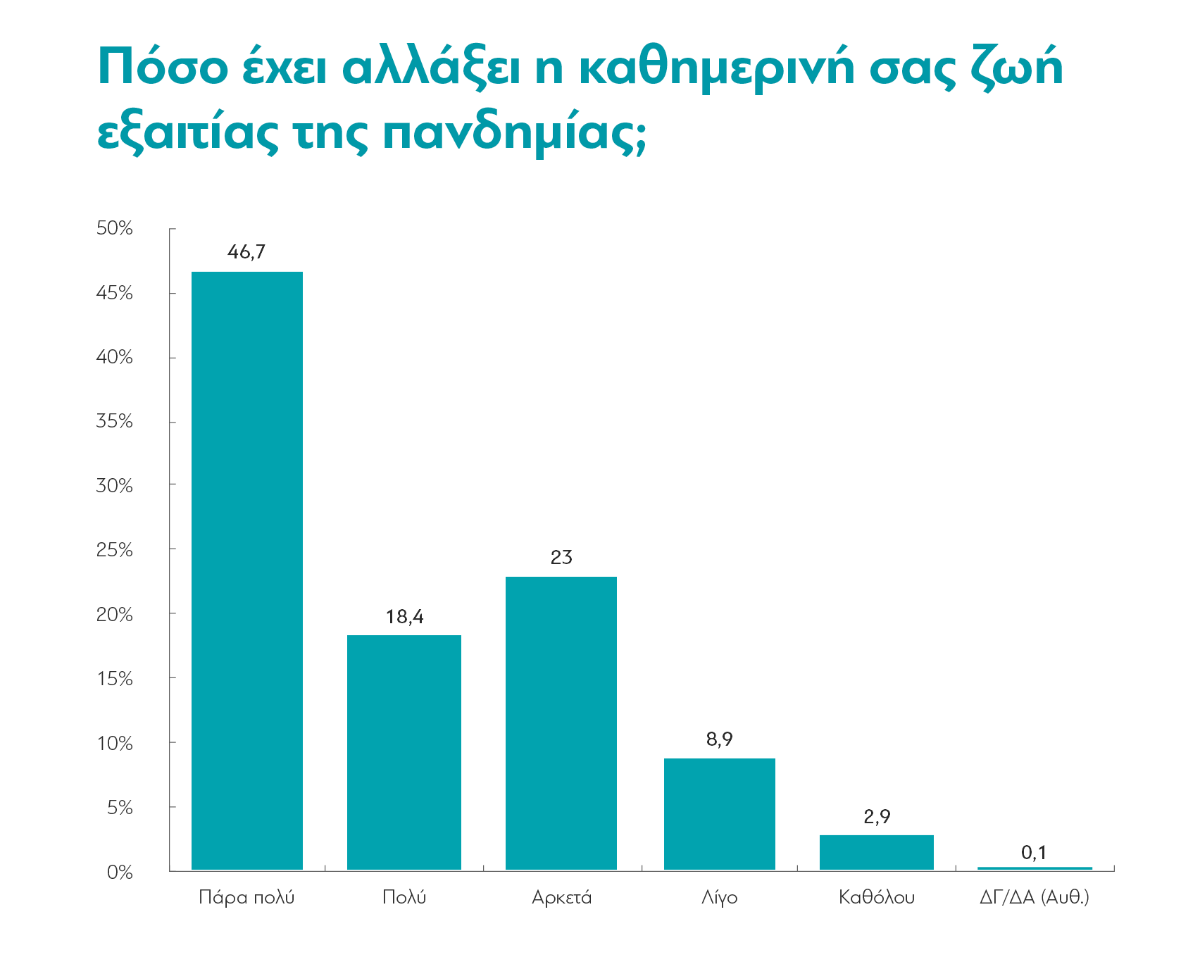 In addition, the Greeks, of course, are still afraid of the coronavirus. 54% answer "probable" or "quite probable" to the question if they think they are at risk of being infected, and 63% answer "very" or "enough" to how much they think they are at risk of getting the disease if they are infected. Here, too, the answers are significantly influenced by the age of the respondents. 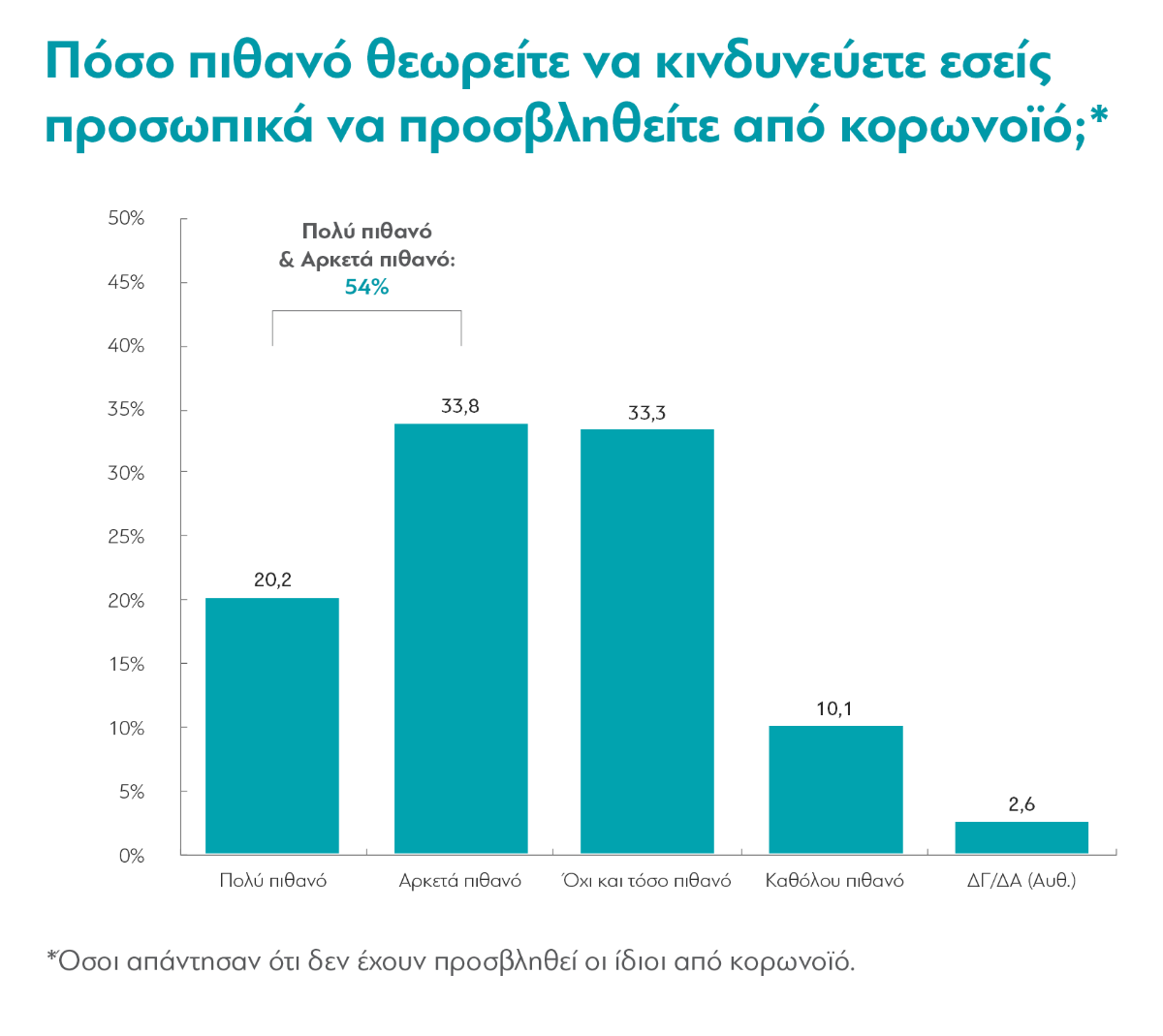 After all, for the first time since April, the percentage of people who answer yes to the question if they have contracted coronavirus is becoming statistically significant. About 2,5% answer "yes" to the relevant question, a percentage that corresponds to about 200.000 people in the general population, not too far from the actual number of confirmed cases (over 130.000 at the time of writing). 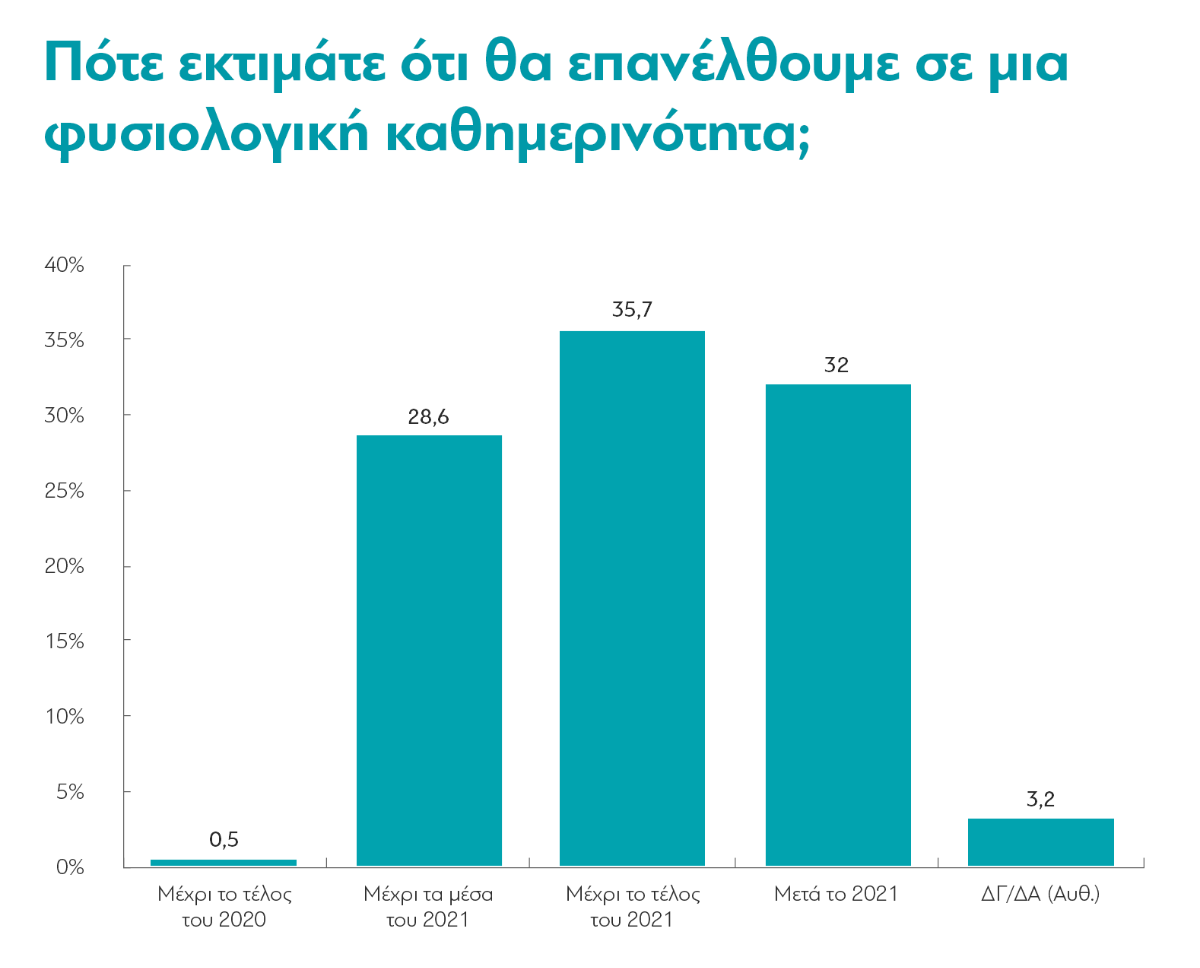 Today, moreover, almost all Greeks - 92% - say they are informed about the pandemic, with 49% saying "very" or "very" informed.

The majority are informed by the internet (44%, as in September) while the percentage of those updated by television has fallen from 49% in April to 37% today. Television, however, gathers the least degree of trust from all sources of information, while the internet also gets a low degree. Citizens, however, trust personal physicians and their relatives to a much greater extent for their information.

Finally, it is worth noting two other interesting findings.

First of all, it is important that 1 in 3 Greeks report that they suffer from a diagnosed underlying disease, with more often hypertension (15,8%), chronic metabolic diseases such as diabetes (9%) and chronic respiratory diseases , such as asthma (5,8%). As mentioned above, the members of this very large group state in a larger percentage of the general population (72%) that they intend to get the coronavirus vaccine as well.

It is also interesting that now half of the employees work normally in their workplace (48%) in the middle of a lockdown, and only 20,3% state that they work part-time. The corresponding percentages in April 2020, in the first quarantine, were quite different. At that time, only 25,4% worked in their workplace, and 26,2% with telework, while almost half of the employees were part-time, on leave or suspended. Now in such forms of reduced employment (or non-employment) there is only 1 in 3 employees.

Again over two thousand and today the cases. Record in intubation as well. According to EODY in the last 24 hours there were 2.215, of ...
Read more
WORLD

Twitter today confirmed that it is working on an option to cancel the posting of a tweet (undo send), immediately after it was sent. A...
Read more
COVID-19

The French biotechnology company Abivax announced tonight that it is terminating the clinical trial it was conducting for a candidate drug for Covid-19, due to "lack of effectiveness" ...
Read more
COVID-19

The number of Americans who say they want to be vaccinated against Covid-19 has increased compared to the rates three months ago, especially among ...
Read more