Cavafy in Berlin with the wings of cinematic poetry 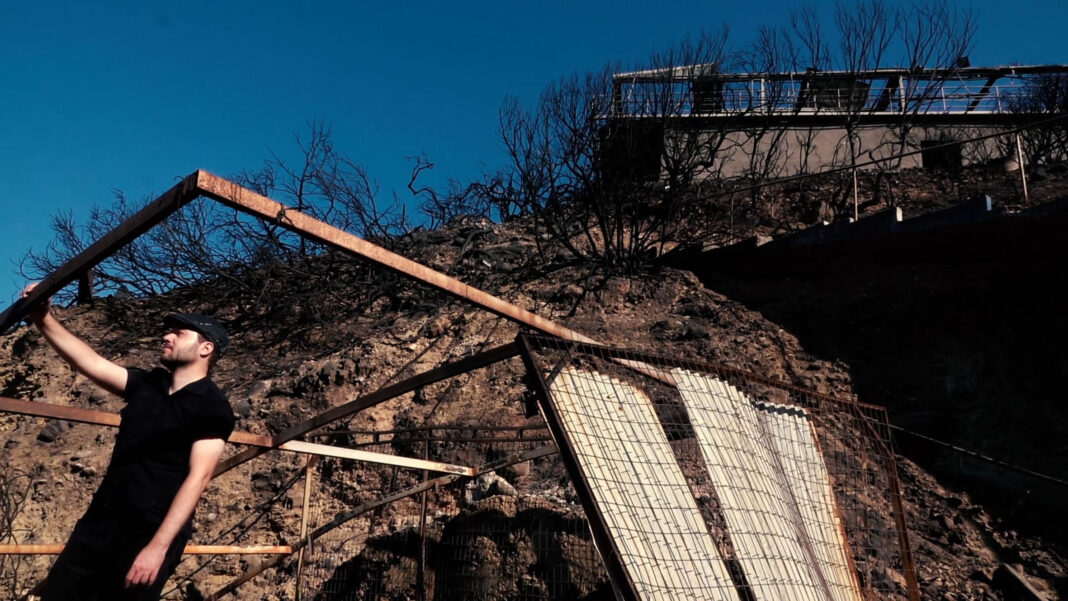 The movie "K. P. Cavafy | The City (Where My Eye Turns) "directed by Panagiotis Kountouras and Aristarchos Papadaniel was selected as an official participation in the ZEBRA Poetry Film Festival, which takes place from 19 to 22 November in Berlin, Germany. 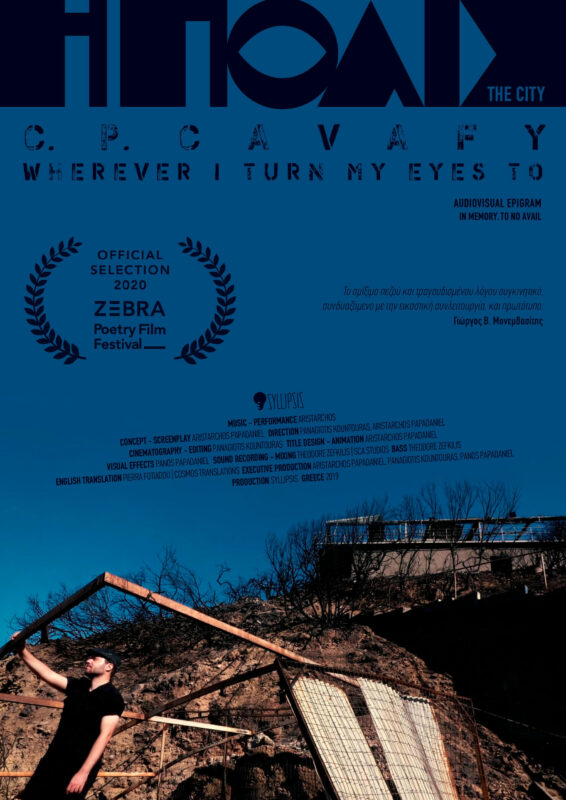 The festival first opened in 2002 and is internationally the first and largest of its kind to screen short films based on poetry.
Due to the pandemic, the festival will be held online, while taking advantage of Vimeo's video-on-demand capability and giving the public the opportunity to access its selected movies for a month (December).

Summary: As a funeral portrait of Fayoum, the look of the Poet who "acquired in Art" "something half-shaped, faces or lines" distinguishes with the blink of an eye the procession of souls in the hollow of the Eye. Audiovisual epigram in memory. To no avail.

The movie "K. P. Cavafy | The City (Where I Turn My Eye) " belongs to the genre of poetic documentary proposing the term audiovisual epigram. Its official premiere took place at the 14th Athens Animfest in March 2019, where it won the Audience Award for Greek films. An important milestone of the film was its official participation in the 24th International Environmental Film Festival "Green Vision" in November 2019 in St. Petersburg, which is the first and oldest film festival of environmental interest in Russia.

At the beginning of the year, the film was included by the Hellenic Film Academy in the 11 nominated short documentaries, from which the members of EAK were invited to select the 5 finalists for the Iris 2020 Award.

In November 2020 the film continues its journey to film festivals with stops at the 11th Amorgos Tourism Film Festival (Special Environmental Selection) in Amorgos, the 15th CYIFF Cyprus International Film Festival in Nicosia and the 14th Docfest in Chalkida.

Currently, Panagiotis Kountouras and Aristarchos Papadaniel are collaborating in the context of the weekly TV show "Shots with a tail" (Saturday, 18:00, ERT2) which is directed by Panagiotis and for which Aristarchos created the visual identity (logo, , titles). The show is edited and presented by journalist Tassoula Eptakoili.

O Aristarchos Papadaniel is an award-winning director and animator. Author of the book "Greek Political Cartoon. The Serious Side of a "Funny" Art ", creator of the series" Pocket Cinema "and the poster book" A Bearer on TV "(Syllipsis). Co-creator, together with the author Sofia Mantouvalou, of the first Greek educational animated series "A Letter A History" (Educational Radio and Television | Ministry of Education, ERT1) for the Greek alphabet and language, which develops in an interactive learning environment A Highly com ). 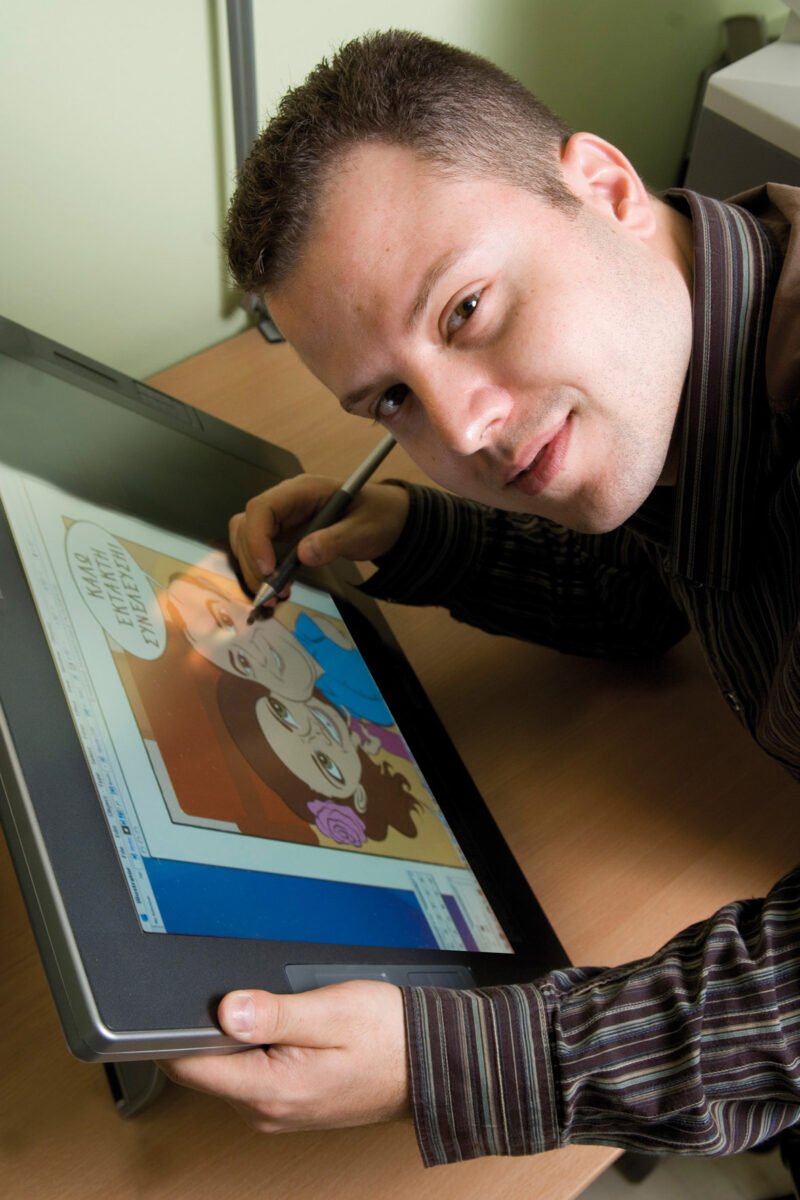 His illustrations were published in magazines (Babel, Dance, 9, PC Magazine) and were shown on TV shows (The Apartment Building, One Month and

Something, The X Factor). Keynote speaker in the series of biographical documentaries "From the Small to the Big" (Association of Greek Screenwriters, Parliament Television) on the subject of great Greek cartoonists. Co-editor of the book "70 Years of Creating Greek Animations" (ASIFA Hellas - Greekanimation.com).

Co-founder of the award-winning creative office Syllipsis and founding member of the Hellenic Animation Association ASIFA Hellas. In 2020, under the Special Program for the Support of the Cinema Community, its proposal for the creation of a short animated film entitled "The Song of the Degrees" (production: Syllipsis) was selected to be funded by the Ministry of Culture and Sports (YPPOA) through Hellenic Cinema Center (EKK).

Ο Panagiotis Kountouras is an excellent graduate of the Department of Cinema (AUTh). His films "Invisible Heroes", "Wooden Box" and "Emoticon Man" have participated in dozens of festivals in Greece and abroad. His award-winning new film "IVAN", held its world premiere t 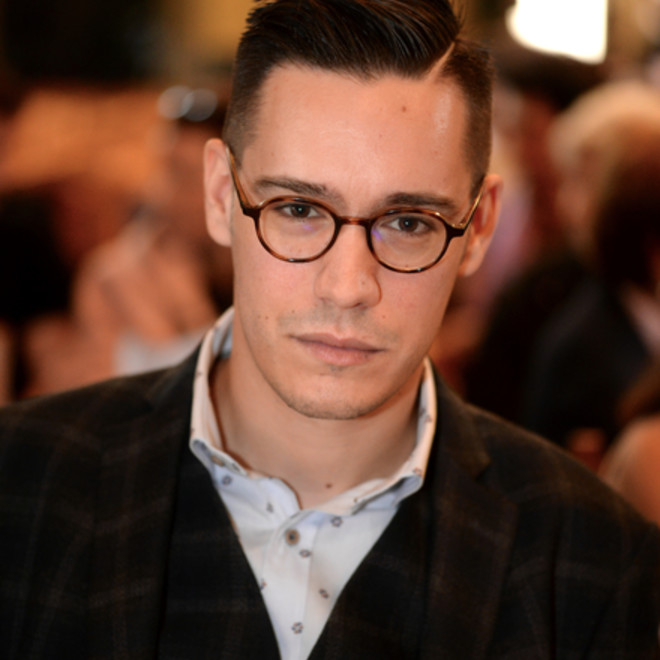 at the Leeds Film Festival. He has directed more than 60 commercials, 120 TV episodes and music videos for renowned artists (Gus G., Dimitris Maramis).

He has directed the transnational EUFORIA program in collaboration with the Thessaloniki Film Festival, for which he has created 15 educational documentaries. With the documentary series "My Name is not Refugee" (TV100), he participated as a director in the World Conference on Public Television (Input 2017). He was in charge of film programs at Mantoulidis Schools and was one of the 6 finalists at the Medea Awards 2018 for global innovation in the use of video in education. Directs and presents the travel show "SELFIE" on ERT2. In August 2020, he participated in the Sarajevo Talents (by Berlinale Talents), in the directors summit program, mentored by the renowned Hungarian director Gula Gazdag.

The bill for the tightening of deportations is being consulted

The bill on "Reform of deportation and return procedures of third country nationals, issues of residence permits and procedures for granting international protection and ...
Read more
GREECE

Glyka Nera crime: How the 32-year-old pilot describes the time of the crime

The scene of the crime was called to describe once again in the early hours of June 18 by the accused pilot, examined during the pre-investigation ...
Read more
SPORT CITY

The World Champion France drew 1-1 with Hungary in "Ferenc Puskas" for the 2nd match of the 6th group and failed to ...
Read more
COVID-19:

The death toll in Brazil from Covid-19 is expected to exceed 500.000 today, at a time when experts warn that the second deadliest ...
Read more
News Bulletin Athens 9.84

The image of the pandemic in the country is still reflected today. Earlier, EODY announced 394 new cases, with the percentage of positivity in relation to ...
Read more
GREECE

A police officer was arrested for robberies at gas stations

A police officer was arrested this morning for robberies at gas stations. As it became known, a case was filed against him for committing serial robberies against ...
Read more
GREECE

The 58-year-old accused of the brutal crime in Kallithea, Katerini, was remanded in custody

The 58-year-old man arrested after being accused of the brutal murder of the 45-year-old in Kallithea, Katerini, was sentenced to pre-trial detention after apologizing to the investigator of Katerini. In the apology ...
Read more

A celebration of refined taste and beauty. Dozens of models walked on Thursday night in Kallimarmaro, wearing the creations of the French house Dior. Impressive images ...
Read more
IT HAPPENS IN ATHENS

The three days of the Holy Spirit are an opportunity for a short getaway from the city and a first "taste" of summer vacation. "They are not few ...
Read more