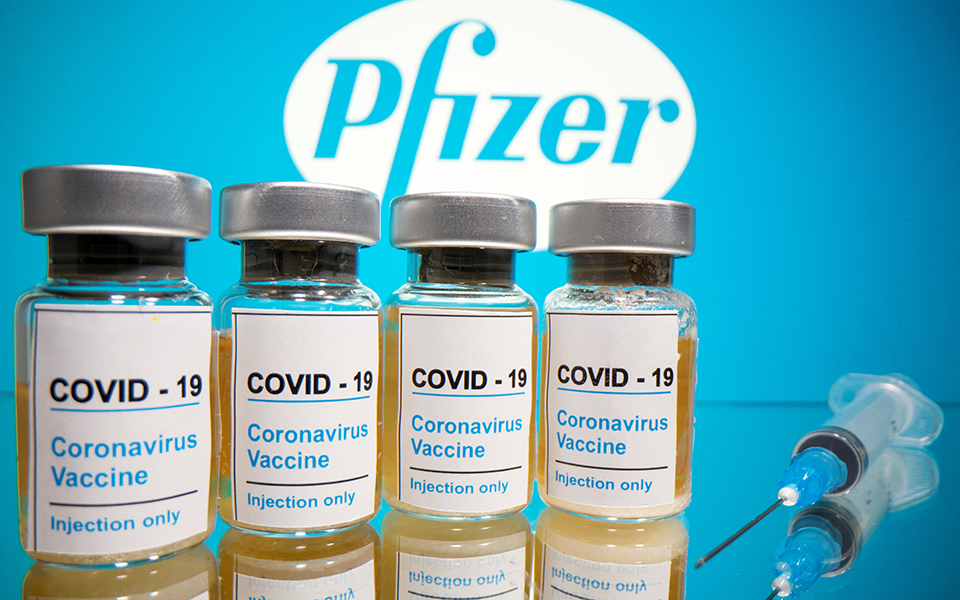 She announced that "the European Commission will soon sign a contract for up to 300 million doses of the vaccine".

Global optimism was sparked by Pfizer Inc.'s announcement that its experimental vaccine is 90% and more effective in protecting against COVID-19 based on its test findings.

Pfizer plans to apply for a broad license for emergency use of the vaccine for ages 16 to 85 at the end of November but can not yet apply for an emergency permit from the US Food and Drug Administration (FDA) because the merger has not been completed. security data, stressed yesterday the president of the company Alberto Bourla. He noted that enough data will have been collected, as required by the organization, in the third week of November. The data contained in the application for approval of the vaccine will be evaluated not only by the scientists of the organization, but also by an external panel of independent experts in a public assembly, Mr. Bourla said in October.

Although the study has not yet been completed, so the results have not been sent to approval agencies, the two companies are expected to have produced up to 50 million doses of the vaccine by the end of the year and up to 1,3 billion doses by 2021.

The Pfizer & BioNTech Group vaccine against Covid-19 disease, which may be released by March 2021 for the most vulnerable populations, could, along with other advances, fundamentally change the course of the pandemic, a senior UN official has said. Health.

Bruce Ellward also told the WHO's annual general meeting that the provisional results announced by Pfizer Inc. on the final stages of a vaccine were "very positive".

"There is still a lot of work to be done, it is a temporary result; but it is a very positive result that was announced today, which is expected to be very promising, to give a lot of hope, to the whole world, as we move forward," he said. Eilward, before the 194 members of the WHO.

For his part, the director general of the World Health Organization, Tentros, Antanom Gebregesus, called "encouraging" the announcement made today by Pfizer and BioNTech labs about a "90% effective" vaccine against Covid-19.

"We welcome the encouraging news about the vaccine from @pfizer and @BioNTech_Group and welcome all the scientists and partners around the world who are developing new tools, useful and effective, to beat Covid-19," the tweet read. written by the head of the WHO.

"People know of an unprecedented innovation and scientific collaboration to put an end to the pandemic," he added.

According to the Wall Street Journal, the vaccine was developed by Pfizer Inc. and BioNTech SE proved better than expected for protecting humans against coronavirus in Covid-19 in a central study. This development is a milestone in the vaccine race that can stop the global pandemic. The vaccine has been shown to be more than 90% effective in the first 94 people who became infected with the new coronavirus and developed at least one symptom.

The assay evaluated 94 confirmed Covid-19 infections among the 43.538 participants in the trial. Pfizer and BioNTech reported that analyzing the results in the two groups of people who took the test - those who received the vaccine and those who received placebo - showed an efficacy rate of more than 90% seven days after the second dose.

This means that protection against Covid-19 is achieved 28 days after the initial vaccination, which consists of a two-dose program. The final efficacy rate of the vaccine may vary, however, as safety and additional data continue to be collected.
How scientists received the news

Anthony Fauci described the results of the vaccine as "great news", who, speaking to CNN, did not rule out the release of the vaccine on the market by the end of the year.

The municipal transport of Metamorfosi is being upgraded

The new bus, acquired by the municipality of Metamorfosi, is already on the streets of the city and a second one will be procured soon. At the same time through ...
Read more
GREECE

An alarm has been sounding since 11 on Friday morning in the center of Volos, when they were located by employees in a box-receiver at the Central Post Office of ...
Read more
GREECE

"Greece alone cannot bear the burden of immigration policy, a new framework must be found that will indicate that it is common ...
Read more
STREAMING

Old Music Concert "Las Meninas: The music behind the table" in live streaming

The emblematic painting "Las Meninas" by the great Spanish painter Diego Velázquez Diego Velasquez becomes the occasion for an unusual journey in the musical universe of ...
Read more
984

Women in the countries of the European Union have been disproportionately affected by the coronavirus pandemic because they constitute the vast majority of health workers ...
Read more
GREECE

Seven senior judicial and prosecutorial officials in a joint statement acknowledge that the Union of Judges and Prosecutors has always had the right to participate and ...
Read more

The municipal transport of Metamorfosi is being upgraded

The new bus, acquired by the municipality of Metamorfosi, is already on the streets of the city and a second one will be procured soon. At the same time through ...
Read more
IT HAPPENS IN ATHENS

Students gather in the Propylaea, demanding that the law of the Ministry of Education on higher education not be implemented. The "University" Metro station remains closed. Victor ...
Read more
IT HAPPENS IN ATHENS

Lefteris, a cinema connoisseur and film fanatic, owner of the Movie Galaxy in Exarchia, has been doing the job of his dreams since 2006. When asked ...
Read more