"Preparing for the Beach": A Secret Look at the World of Retired Women by Pernille Koldbech Fich 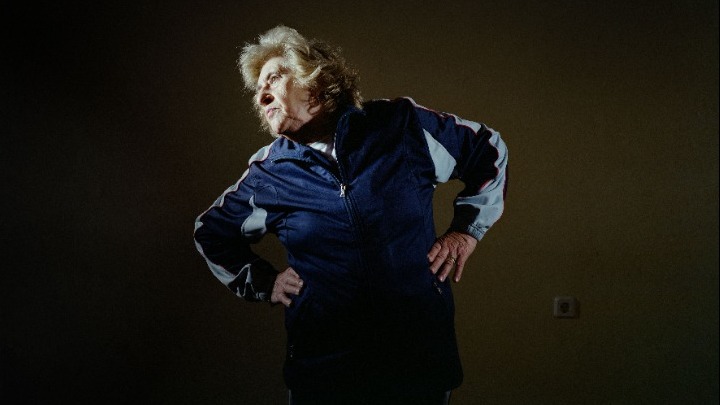 The exhibition "Preparing for the Beach" by the Danish photographer Pernille Koldbech Fich, presented from Thursday, October 1, 2020 at the Benaki Museum of Piraeus, is a reflection on time, age and vanity; faded memories of family and youth that are intertwined with reports from their daily lives in Athens.

The exhibition will last until Sunday November 22 2020 and is organized by the Benaki Museum and the Danish Institute in Athens.

The Preparing for the Beach exhibition is a secret look at the world of retired women, each a member of a different KAPI or Friendship Club of the Municipality of Athens. In these Clubs the elderly can attend gymnastics and self-defense classes by distinguished male athletes who have now retired. Memories, imagination and reality are intertwined in a Memento Mori, a reminder of mortality and the variability of life. The time that passes while the physical exercises are repeated in order to keep the body healthy and the memories alive and thus to be able to continue their life.

Pernille Koldbech Fich's topics are older women. Looking at the photos one may wonder how they lived their lives and who or what mattered to them. What events shaped them and what paths did they follow? Are they mothers, daughters, mistresses or all of them together? Which ones are they or could they be?

The photos are strangely gentle and at the same time persistent. They produce narratives that are imaginary and at the same time true. Throughout the encounters with the depicted women, the viewer is forced to reflect on his life and mortality. What does it mean to exist, to belong somewhere, to someone or something and what does it mean to be alone?

In the exhibition Preparing for the Beach, the seemingly simple things and objective facts dive into unknown waters. Accordingly, the complexity of knowledge and understanding of age and lived life becomes strangely familiar. In short, the simple becomes complex and the complex simple. The encounter with the works of Pernille Koldbech Fich leaves the viewer somewhat puzzled but at the same time wiser about the importance of being human.

Considering the process while working in Athens, Pernille Koldbech Fich writes about:

"… At KAPI… it was like being in the theater or watching a movie that was both a fitness video and a dramatic movie of socialist realism. All exercises have a predetermined order and like the teacher's instructions, as if they follow a script ∙ in a language I do not understand. The photos are like snapshots from this movie. I do not know the actors, but even so, I imagine their life story just by looking at them and thinking about what their lives are like. Who are outside the limited space I meet?

The 43 photos are accompanied by short phrases and recordings from the daily scenes at KAPI where the women are in dialogue with the trainers and my young interpreter. Together, they reflect on the present and the past following an annual cycle. The texts will be placed on the walls of the exhibition as excerpts from a film script with each generation having its role and its mottos ".

The exhibition Preparing for the Beach is held in collaboration with the Danish Institute in Athens.

Pernille Koldbech Fich is a visual artist from Denmark (Copenhagen, 1971) with a Master's degree in Visual Communication from the Royal Danish Academy of Fine Arts. He has participated in many local and international exhibitions. In the last five years he has received numerous scholarships from the Danish Institute in Athens, for the purpose of research and development of the project Preparing for the Beach.

Foreign Minister: Turkish allegations regarding alleged incident in Evros are rejected in their entirety

"The Commissioner in Ankara, following relevant instructions, responding to a relevant emergency step to which she was summoned earlier today at the Turkish Foreign Ministry, rejected all ...
Read more
GREECE

ELAS: There was no involvement of Greek forces in the alleged incident in Evros

"Regarding publications of Turkish media that are reproduced on websites, it is announced that there was no involvement of Greek forces in the alleged incident in Evros", he states ...
Read more
984

G. Antetokunbo: I have not believed it yet - We will take the trophy to Sepolia

For huge damages to houses and crops caused by the big fire in Ziria, the Mayor spoke to ATHENS 9,84 and Giannis Theodosis, ...
Read more
984

The two police officers are also faced with possible criminal responsibilities, who, although they received a high priority signal, did not even come down from ...
Read more
984

The Minister of Civil Protection, Michalis Chrysochoidis, described the situation on the fire front in Achaia as "very improved". "Today's much improved picture ...
Read more
CIVILIZATION

All Greece a Culture - Schedule of events 2-8 August