Η Film case suggests a selection of rare films from its archive that are presented online for the first time through new digital of room.

Each movie will make its online premiere on a specific day and time on its updated website Film library and will be available for three 24 hours online. Then it will be her turn next.

The opening will take place on Wednesday, April 8 at 20.00 with the oldest surviving Greek fiction film "The Adventures of Villar" (1924) and the screenings will continue throughout April. At the same time, through the website, we will have access to more details about these films, the peculiarities of their production, their original creators and the process of their restoration.

The films were selected based on historical / chronological criteria, so that the public, watching films from the beginnings of Greek cinema, to see the evolution not only of Greek cinema but also of the Greek landscape (Athens, countryside) over the years. At the same time we get a taste of the archive of the Film Archive and its multifaceted action (rescue, restoration, maintenance and screening of films of Greek cinema).

Most movies will be shown with original music composed by well-known composers to whom the Film Archive commissioned to invest the newly restored copies.

The films that will be screened from April 8-20 are: 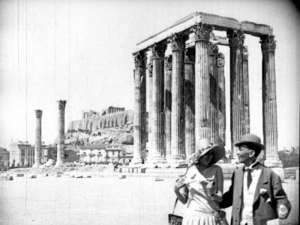 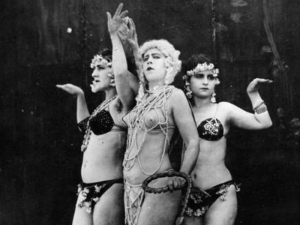 Friday April 17
LOVE OF VOSKOPOULA (Dimitris Tsakiris, 1932)
Based on the genre, Koromilas's theatrical work for the genre, he transfers the action to the Politics of Evia and produces the second surviving fustanela of Greek cinema and the first Greek-speaking film. The technical elaboration took place in Berlin and the music was written by Dionysis Lavragas. Monday April 20
SOCIAL ROT (Stelios Tatasopoulos, 1932)
Stelios Tatasopoulos is shooting the first film of social realism in Athens in the 30s. Drugs, gangs, prisons but also strikes and clashes with the police.
Music: Konstantinos Beta. The film was restored with a co-producer on COSMOTE TV. 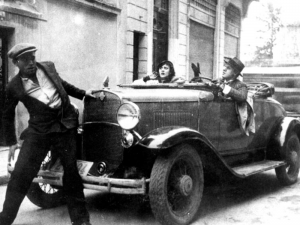 Start Time: 8 p.m. - Each movie will be available online for three 24 hours.
See the schedule of the movies here.

The short WHEEL of Theodoros Adamopoulos

It is worth mentioning that the short film is already uploaded (and will be accessible throughout the month) on the Film Archive website. THE WHEEL (1964) by Theodoros Adamopoulos, a movie-walk in Athens that we will especially enjoy today, in these difficult days of confinement. These are the adventures of a car tire in Attica. The wheel was unexpectedly put out of the engine, wandering around the city.

A tour - in a satirical mood - in Athens of yesterday, today and maybe tomorrow. The sight of a small revolution whose final results bring nothing but the renewal of the conditions of the ties. A short getaway. An illusion of freedom. Or is it a daydream? 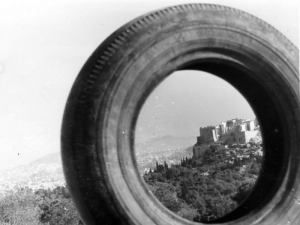 Conservative MP Sir David Ames was attacked with a knife during a meeting with voters in his constituency, as broadcast ...
Read more
984

Prosecution investigation for the flooded bus

The intervention of the head of the Athens Prosecutor's Office, Sotiria Papageorgakopoulou, was provoked by the images recorded by the Media with his passengers ...
Read more
SPORT CITY

Olympiakos' appeal against the penalty of one match was heard

With the submission of a written memorandum and without a hearing procedure, the appeal of PAE Olympiakos was heard in the Appeals Committee of the EPO, with which it requests ...
Read more
984

The bad weather "Ballos" is hitting Attica today with less intensity than yesterday. According to the director of EMY, Thodoris Kolydas, who spoke in Athens ...
Read more
GREECE

Through OPEC, a one-time financial aid of 6.000 euros will be granted for each person who suffered an injury from the catastrophic fires of the past ...
Read more
984

V. Evia: The 70-year-old shepherd was found dead in a stream bed

The 70-year-old shepherd who was missing since yesterday in the village of Tsakaioi in the municipality of Karystos was found dead. According to the Fire Department, he was found unconscious in a riverbed ...
Read more

Postponement of the general education rally

The teachers' federations are postponing the planned rally, due to the weather conditions that prevail in Athens but also to the measures that have been announced by ...
Read more
IT HAPPENS IN ATHENS

The traffic in Piraeus and the regional Egaleo was restored

According to the latest information from ELAS, the traffic of vehicles in sections of Piraeus Street and the Egaleo ring road, which had ...
Read more
IT HAPPENS IN ATHENS

Minor problems in coastal shipping due to strong winds

Minor problems have been created in the coastal transport, due to the strong south winds that blow in many sea areas, which according to EMY reach by ...
Read more
IT HAPPENS IN ATHENS

The Lighthouse of the Blind of Greece and the Museum of Touch celebrate for 2021, as every year, the International White Cane Day, with actions ...
Read more
IT HAPPENS IN ATHENS

Balcony of an apartment building in Chalandri

The balcony of an apartment building on Kourtesi Street fell at 7.45 in the morning without any injuries. The balcony fell on the balcony below ...
Read more