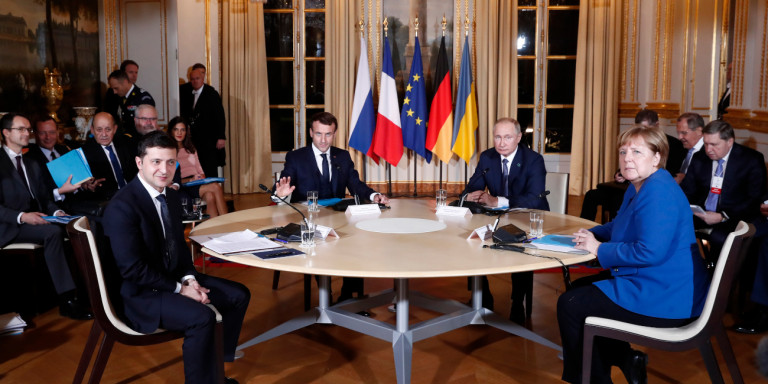 The presidents of Russia, Vladimir Putin, and Ukraine, Volodymyr Zelensky, agreed on Monday to work for the withdrawal of troops from the three claimed territories by the end of March, and for full implementation of the ceasefire in eastern Ukraine by the end of official announcement made by the French presidency after the end of the quadripartite summit of the so-called Normandy group in Paris.

The parties "committed themselves to the full and thorough implementation of the [ceasefire] agreement" and "the implementation of all necessary measures to support the ceasefire before the end of 2019", the statement said.

They also agreed to achieve "the goal of withdrawing forces and armaments by the end of March 2020," according to a joint statement from the four parties to the so-called Normandy group.

The summit, hosted by French President Emanuel Macron and attended by German Chancellor Angela Merkel, gave Putin and Zelensky the opportunity to meet for the first time.

The new president of Ukraine has stated that ending the war in eastern Ukraine is his top priority.

The joint announcement also mentions the exchange of "all" prisoners until the end of the year, clarifying that these are detainees whose details have been verified.

The text also mentions the creation of new crossing points on the dividing lines between the territories controlled by the government forces and the pro-Russian separatists in Donbas.

French President Emmanuel Macron spoke of "progress" in trying to restart the peace process in Ukraine after the end of a four-party summit in Paris, during which Russian President Vladimir Putin and his Ukrainian counterpart Volodymyr Zhelensky met. for the first time and announced a new session within 4 months.

"The fact that we are side by side in Paris is an important achievement (…) the resumption [of the talks] in a credible way had not been possible due to the lack of progress for many years. "It's an achievement," he said.

He also expressed the hope that a new meeting could take place within the framework of the so-called Normandy group within four months.

He noted that there were clear differences between Ukraine and Russia, especially in the timing of elections in eastern Ukraine.

He added that the two sides hope to reach a compromise on the issue within the time limit until the next meeting.

"We know that there are disagreements over the timetable (…) and we had a long discussion" in which it was agreed to define "the political and security conditions for these local elections" within the four months that have passed. "It simply came to our notice then. We did not find a miraculous solution, but we moved on, "he added.

"We proceeded with the disengagement, the exchange of prisoners, the ceasefire and the political process," said the French president, who hosted the summit.

German Chancellor Angela Merkel said she was "very pleased" with the decisions taken at the quadripartite summit on the Ukraine war in Paris yesterday.

"Today [Monday] we overcame the impasse," the German prime minister said after the meeting, hosted by French President Emanuel Macron and in which Russian President Vladimir Putin and his counterpart met face to face for the first time. of Ukraine Volodymyr Zelensky, elected this year.

The parties agreed on "realistic" goals, Merkel said, adding that "of course" the aim is "to continue on this path".

He said that yesterday's quadripartite meeting of the so-called Normandy group gave a new impetus to the effort to restore peace in eastern Ukraine but warned that much work remained to be done.

"I say very openly that we have a lot of work to do but the feeling I got from this meeting is that there is good will to solve difficult problems," Merkel added.

"Now we need to keep working very hard, there is no doubt about that, but there is momentum again, movement," said the German chancellor.